Brian Clark :: A is for Asshole 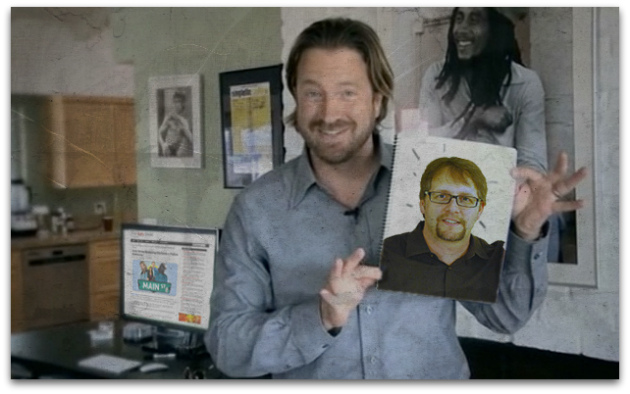 … but then we had to pause to talk about newts and Twitter spammers and such so I could mention that I was quoted in one of America’s original science magazines. Woot! Nerd-gasm! Wanna talk some more about that? Cause I will …

Okay fine :: but as long as we’re on the subject of stupid Twitter bullshit … let’s linger for a moment on turd eating chumpsicle Brian Clark.

Brian Clark is a copyblogger. A copyblogger :: for those of you not in the know about dumb stuff :: is like a problogger who uses all of his copying skillz to make him some serious shoemonies that he shoves in his brogan. I think :: maybe … something like that.

Maybe I’m wrong when I say that I think Copyblogger’s Brian Clark is one of the worst scammers on the Internet. Maybe … maybe I’m wrong. But just in case I’m not wrong I better say it again …

I think Copyblogger’s Brian Clark is one of the worst scammers on the Internet.

Neicole Crepeau is not a professional investigator of Internet darkness :: as you can tell by the title of one of her recent posts … Is Social Media Getting Sleazy?

“I’ve recently learned about and seen some activities that make me question how we’re conducting business on the social web, and whether it may cause the social media backlash many have feared.”

There is some pornography available on the Internet.

“The problem seems to be our drive for numbers of one kind or another: more followers, more website visitors, more backlinks.”

Or :: and sticking with Neicole’s unnecessary question mark motif :: maybe the problem is that it’s all about the money?

Neicole also had the nerve to make a non-sycophantic reference to copyblogger’s Brian Clark :: all the “copybloggers” have now been removed from the reference thanks to a typically spasmodic reaction from same said Brian Clark …

“So, as part of this consultant’s package, he finds good sites (mostly blogs) that cover topics relevant to his client’s business, and ones that take guest posts. He builds a list of these websites. I happened to get a glance at his list for one client, and was surprised to see xxxxx on it.

The SEO consultant pays different companies who specialize in writing keyword-soaked content on a relevant topic, with appropriate backlinks to his client’s website. They submit the content to the selected high-traffic blog to create backlinks.

This all suggests that a reasonable portion of xxxxx’s content is provided by third-parties who are paid simply to provide passable content with the sole intent of getting backlinks to client sites with appropriate keywords.”

Well :: at least somebody’s getting paid … how unusual. I think it’s kinda refreshing actually :: but here comes sleazy Brian Clark harassing and threatening Neicole :: and raining on my “somebody got paid” parade …

“We don’t pay anyone for content outside of our organization. And no one pays us. To the extent a ghost-written post has been submitted to us, we’re not aware of it, and most of our guest writers are repeat contributors and people we respect.”

Copyblogger could pay high quality people to provide high quality written content :: but given how reliant copyblogger is on outside writing :: that would get expensive :: and many more Syndicate frauducts would have to be flogged to pay for it all. Much better for copyblogger to find sheeple who will write for free in exchange for the bump in perceived authority that is said to come with writing for an “A-list” blogging about blogging blog.

Guest writers can use the perceived authority bump to sell their own “and you can too!” bullshit. Then when Clark releases ridiculously worthless products like Scribe SEO … “respected” guest writers with baseless authorita can be counted on for testimoanials.

Dave Navarro is “The Launch Coach” :: he’s like an expert on everything and stuff. Buy some of his frauducts now if you want to suckcede just as hard the The Launch Coach has suckceeded. Naomi Dunford writes a blog called IttyBiz :: and she’s also an expert on everything and stuff. Both Dave and Naomi disappeared from the Internets awhile back :: Naomi’s last entry started like this …

“You’re not an expert. You’re just some guy in his home office.”

So said the wife of someone I know, someone whose business brings in a little more than half a million dollars a year in profit.

Well :: Brian Clark’s marketing hero Jeff Walker knows just what to do in situations like this … scrape off the haters! A family that doesn’t believe in unicorns is not a family worth having.

Dave’s siblings and extended family were so unimpressed by his “run away and leave your kids” routine that they put up an open letter site calling for his return. Read more of the respectable story of Dave and Naomi there … Letters to Dave Navarro. I don’t usually write guest posts :: but I made an exception because I know how important guest posting was in the {d}evolution of Dave Navarro.

Back to Clark abusing Neicole because she’s a girl :: and because the bully that lives inside of him perceives her as weak …

We’re primarily a software company. How can you write about a company so recklessly with no idea what you’re talking about?

And give me the alleged SEOs name, because you’ve just joined him in a potentially unpleasant situation involving published lies – also known as libel.

How can you use the word recklessly so recklessly when you have no idea what you’re talking about?

Libel … also know as the wrong way to say defamation.

“I’m sick of uncreative, ignorant people thinking they can say anything and get away with it. Libel laws exist for a reason.”

Oh shit :: that reminds me of how I wanted to keep saying that I think Copyblogger’s Brian Clark is one of the worst scammers on the Internet.

Thanks for reminding me!

I think that copyblogger Brian Clark is one of the worst scammers on the Internets.

I suggest you retract what you’ve said about xxxxxx. It’s not true and recklessly asserted, which crosses a line beyond “your opinion.” You didn’t even bother to contact anyone at xxxxx before publishing your unfounded assertions.

This isn’t a smart way to get attention.

Neicole Crepeau took her post down :: because even ignorant lawsuit threats are scary. It’s fucked :: and it happens all the time. But then she bravely thought better of it :: reposted it :: and talked about it on a boy’s blog where Clark was more likely to behave himself {cause that’s how dickless twats roll}. The dickless twat pseudo-apologized and then everyone was all like :: “oh … me so happy now … big happy family now … positivity is the king of the rainbows … blah blah blah.”

No … there is data in the fact that Clark reacts like this on a semi-regular basis. Ignore valuable data at your peril.

Last year Brian Clark posted about The Salty Droid :: revealing my already revealed identity and accusing me of being a failed acne Internet Marketer. It was offered as an assertion not as opinion :: it was published :: and it was totally wrong.

The same lies came out of Gotcha Sean McAlister’s blowhole five months later as he attempted an anonymous troll defense of a James Malinchak launch in which he had a direct and undisclosed financial interest.

Two d-bags with the same defamatory lies :: not a coincidence.

The Syndicate complied a file of {mostly inaccurate} personal information about Jason {and his family and friends} :: and then passed it around to the rest of the sick machine. I don’t recall Brian Clark attempting to contact me before publishing unfounded assertions propagated by a group that talks openly about wanting me dead. Gosh that sounds like recklessness :: not a smart way to try to get my attention.

Have I mentioned that I think Copyblogger’s Brian Clark is one of the biggest scammers on the Internet?