A few years ago NBC was all about dry humping James Arthur Ray. They :: and their lazy affiliates :: brought him on multiple times as an “expert” on finance :: or success :: or whatever the fuck.

“Oh James! You’re so steroid & fake tan adorable. Love me! Tell us all about the success of being an Oprah guest. Your book has the word wealth in the title :: what’s it like to have infinite wealth :: success :: and happiness? I think the viewers would love to know. Oh what’s that you say? You give free seminars? Super duper super duper! The good people of Minneapolis should get out and take advantage of that.”

Gag! I guess they are too busy “to catching” predators to notice that they are FUCKING PROMOTING predators.

Partially owing to their negligent programing :: some much loved human beings lost their lives. How about an NBC mea culpa? How about an NBC reality check? Nah. EIGHT long months later :: we get a story that cashes in on the drama of it all :: and opens like this …

“Tonight, for the first time, you’ll hear the inside story from some those who were there, as well as those whose loved ones never came home.”

Horah! You did it NBC! {massive fake applause!} Keep up the great work. God save The Fourth Estate!

On the upside :: the embedable video player at MSNBC is pretty pimp. The whole episode is available above :: and in between clips it converts into a cool thumbnail viewer type thing.

The story lasted the full hour :: and it was interesting … and useful. But considering the amount of time that has passed :: and the direct culpability of NBC in building up Death Ray’s fake celebrity :: I say this story was garbage.

“Canadian businessman Dennis Mehravar went to one James Ray event after another, spending a total of close to $30,000 to immerse himself in Ray’s teachings.” 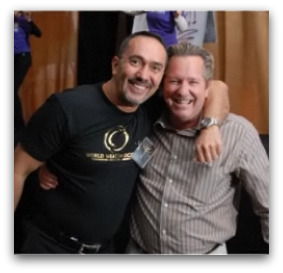 And here he is on JRI’s Flickr at the World Wealth Society New Year’s Gala. You’ll notice that he’s pictured with Hermia Nelson :: who has been discussed here previously :: and who was still supporting Death Ray long after the chips fell. The World Wealth Society is a $60k per year item :: so maybe Dennis has given James a bit more money than he’s willing to admit to himself {or to Dateline}. Or perhaps different people paid different prices for access to the “inner circle?” I’d really love to know the answer to that question Dennis Mehravar :: Top Kitchener Ontario Real Estate Agent. In case you ain’t web savvy Dennis :: I just did you a big SEO favor. You can thank me by answering my oh so insightful question.

Beverly Bunn mentioned something interesting that I hadn’t heard before. She says that early on in the Spiritual Warrior event Ray started pushing other products :: one of which was priced at $25,000 {what product was that?}. That’s so disgusting :: and so exactly what you’d expect from an asshole ConMan. She also mentioned that he was trying to sell his new book :: and NBC put up this image … 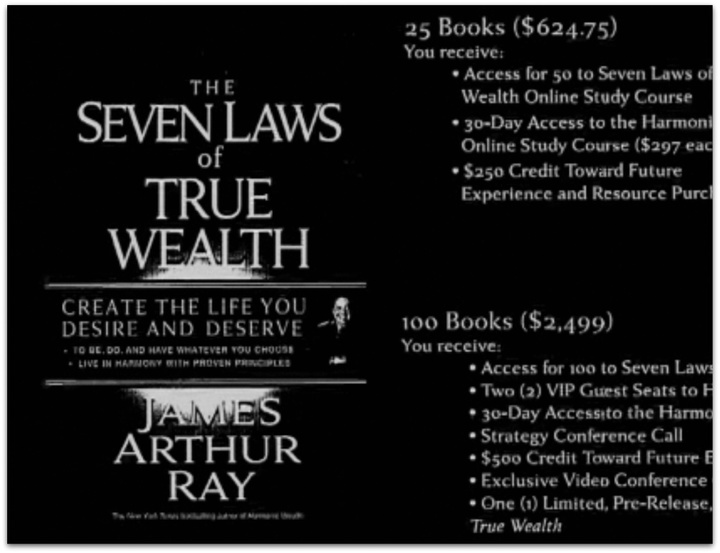 The Sevens Laws of True Wealth :: Create the Life You Desire and Deserve

What a shame that this ghost written masterpiece of fluff won’t be released. Here’s hoping his publisher lost some “true wealth” over it.

The text on the right shows him trying to sell these books in bulk. Buy 100 and you can attend the Harmonic Wealth Weekend for free {O} :: plus have a conference call {M} :: and a … wait for it … video conference call {G!}. But then you’re stuck with 100 really shitty books :: what to do? Funny you should mention that :: have you ever considered starting your own business reselling other people’s ideas and making almost no money yourself? You can you know.

It works like this :: you buy the books at wholesale above retail {WAR} prices. In this case $25 per book :: well above retail. Then you resell them at retail above retail {RAR}. With RAR pricing you can add a profit margin for yourself of up to infinity :: as a way for the customer to thank you for your unnecessary middle manning. Sell a couple to your family and friends :: lose some money trying to sell them with PPC :: and then forget about it until you have to sell them all on ebay for $5 after your life falls apart and your cat kicks you out.