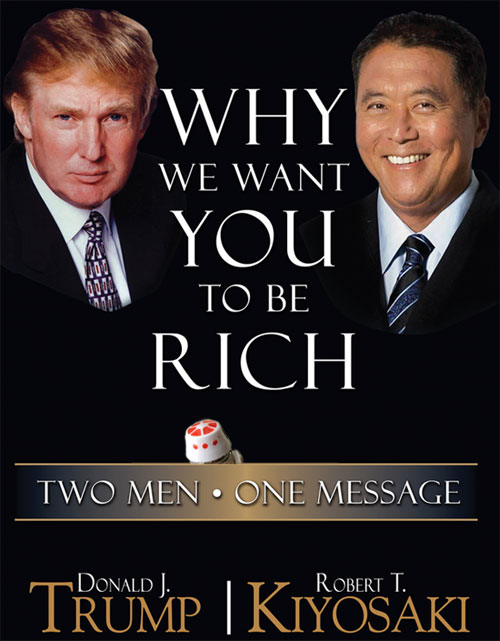 Donald Trump and Robert Kiyosaki are like backrubbing besties … and stuff.

Give us ALL your fucking money {and all the money you can borrow} so we can keep pretending to be self-made millionaires.

It’s not a very good message. But the book doesn’t need to be good :: because like most such books … it’s just loss leader lead gen for the darkside ops on the backend.

In our Oprahized culture :: having celebrity is much more important than having credibility … and it’s turning America’s collective mind into a can of Paula Deen’s Slightly Racist Tomato Paste™.

Don Trump :: who is a mediocre used car salesman in 9 out of 10 J.J. Abrams parallel universes … was just sued by the New York Attorney General’s office for his {full disclosure … not a university} Trump University. 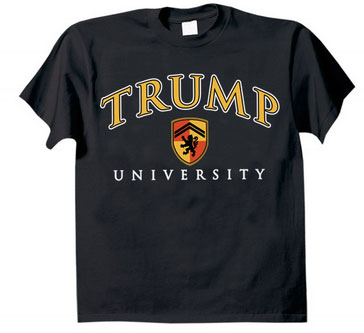 The lawsuit, which seeks restitution of at least $40 million, accused Mr. Trump, the Trump Organization and others involved with the school of running it as an unlicensed educational institution from 2005 to 2011 and making false claims about its classes in what was described as “an elaborate bait-and-switch.”

Ha! … couldn’t have happened to a douchier douche.

This three-day seminar was itself “an upsell,” the lawsuit said, for increasingly costly “Trump Elite” packages that included so-called personal mentorship programs at $35,000 a course.

A consumer class action complaint filed against Trump {not a} University in 2010 :: details some pretty shocking {if you’re not a regular reader of this fake robot site} fucking details …

“Trump University representatives also told students during the three-day seminar to raise their credit card limits four times during the break for “real estate transactions,” and had students prepare detailed financial statements, presumably for real estate purchases. In fact, Trump’s real reason for having students increase their credit limits and provide detailed financial statements was to assess how much money each student had to spend on the next Trump seminar, and to persuade the students to use their increased credit limit to purchase the Trump Gold Program for $34,995.”

Funny :: in the not funny way … how Trump University is so exactly like Robert Kiyosaki’s Rich Dad Poor Dad scam seminar series. In this stellar takedown of Rich Dad on CBC’s Marketplace :: Rich Dad seminar salesman are shown making scripts available for victims to use when trying to get their credit card limits raised during the break.

The similarities between Rich Dad and TrumpU are so striking :: it’s almost like neither of these two fake fuckheads came up with the ideas … and are instead just working from a well-developed playbook … what James Arthur Ray had his minions calling “the syntax.”

Speakers used the same slide presentation, the same script, and even had detailed instructions for the presentation, down to where the speakers and coordinators should stand, the temperature of the room and the music to be played during the Introduction – “Money, Money, Money” from the Apprentice show.

In classic scamworld fashion :: Trump countersued the victims of his fake university :: claiming that their letters disputing charges with credit card companies :: and complaints made to the Better Business Bureau about getting ripped off … constituted a grievous defamation. This from the appeal of the district court’s refusal to apply anti-SLAPP laws to the rich white guy {per the usual} …

To this Trump University responded with a counterclaim asserting that “defamatory rhetoric” it lifted out of context from Makaeff’s earlier letters to her bank and the BBB had done it great harm. Asserting that Makaeff “found herself in a ‘precarious financial position,’” and “desperate for cash,” Trump University demanded damages for Makaeff’s so-called “defamatory rhetoric” that it claimed “may equal or exceed $1,000,000.”

… I guess you prolly didn’t hear about that in the “news” :: because they were so busy retweeting the plights of Crystal Cox and giving Donald Trump television shows.

Trump’s “quotes” are like Yogi Berra fucked a spambot.

“No one, no matter how rich or famous they are, has a right to scam hardworking New Yorkers,” Mr. Schneiderman said in the statement. “Anyone who does should expect to be held accountable.”

Whatever … such government bullshit.

Second) Very close to nothing has ever been done about this out in the open epic problem :: so rich crooks should continue to “expect” to get away with doing whatever the fuck they want … up to and including murder by manipulation.

Trump University’s $40 million over eight years isn’t even a particularly impressive return in the land of the unicorns. I’d be surprised if Rich Dad had done anything less than five times that much damage over a similar period. And there are hundreds of such operations :: The Donald is just the tip of the {unmelting} iceberg. 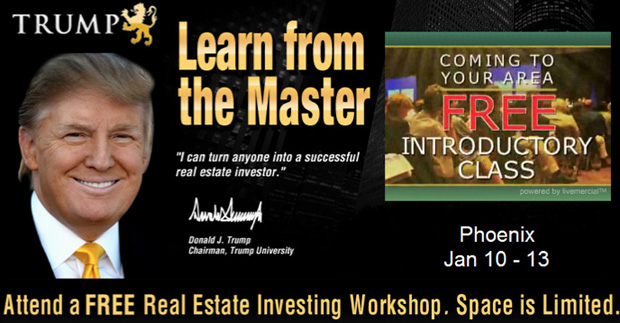 Trump says the NY Attorney General’s suit is “politically motivated” :: his lawyer calling it “tantamount to extortion” … and on Monday Trump went on the not news show Fox & Friends to blame the whole thing on Obama …

[Trump] baselessly speculated that President Obama was using the lawsuit to politically target him, noting that Schneiderman and Obama met two days before the suit was filed and saying, “Maybe this is a mini IRS.” Co-hosts Brian Kilmeade and Steve Doocy agreed with Trump that the president may have been involved, noting, “The president hasn’t liked you for a while.”

I guess we’re supposed to believe that Trump is some kind of Republican … and not just a massive asshole spoiled richboy idiot who’s only ever been all about he himself and him.

But how to blame the black guy for this 2010 notice of investigation by the Attorney General of Texas? Maybe it was the handiwork of the all-powerful Texas for Obama Illuminati?

In 2005 :: about the same time Trump University started ripping off normal people and {according to the 2010 class action} targeting senior citizens … The New York Times’ Timothy O’Brien concluded that D-Trump was worth far less than his vainglorious self-reporting would indicate. Trump sued O’Brien for defamation … and lost.

I don’t mind getting sued for calling Donald Trump a fucking scammer :: because he clearly is one … and risking my robot ass for little old ladies hustled out of their retirements is what this site is all about. But I don’t wanna get sued for saying Donald Trump isn’t actually a billionaire … because I couldn’t possibly care less.

So I guess I’m legally obligated to assume that Mr. Trump is worth $6 billion. In which case :: he’s one of the most disgusting pigs to ever to make my ignominious list of disgusting pigs. Putting working class Americans deep into debt just to pour $40 million of gravy over your already attained {using daddy’s money} multiple billions? Unconscionable doesn’t even begin to describe it.

As citizens :: we can’t fire Donald Trump … nor can we ducktape his always flapping mouth shut and set him on fire for being the first witch {ever!} to sport a combover. But if we wanted to get serious about rooting out the gigantic fraud bombs that continue to endanger the survival of our social order :: and if we wanted to protect our invigorating and always innovating capitalist system :: then we could arrest his lying poser ass … and actually hold him to account. Because if this is okay … what isn’t okay?

Come on America :: I wanna believe in you again … like I believe in Clint Dempsey.