Andy and Frank wanted me to write about Jeremy and Mark :: so I didn’t.

But then later :: I totally did.

Let that sink in for a minute.

They asked me to sign a declaration so that the above graphic {sans robot} could be used as evidence in a hearing to attain a preliminary injunction maintaining the trustee’s control over all of Johnson’s ill gotten assets. 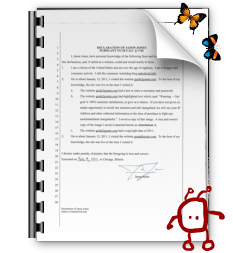 The FTC got their injunction.

Then they called me back :: and asked lots of questions :: about lots of stuffs.

As you don’t need to imagine :: I had lots of answers.