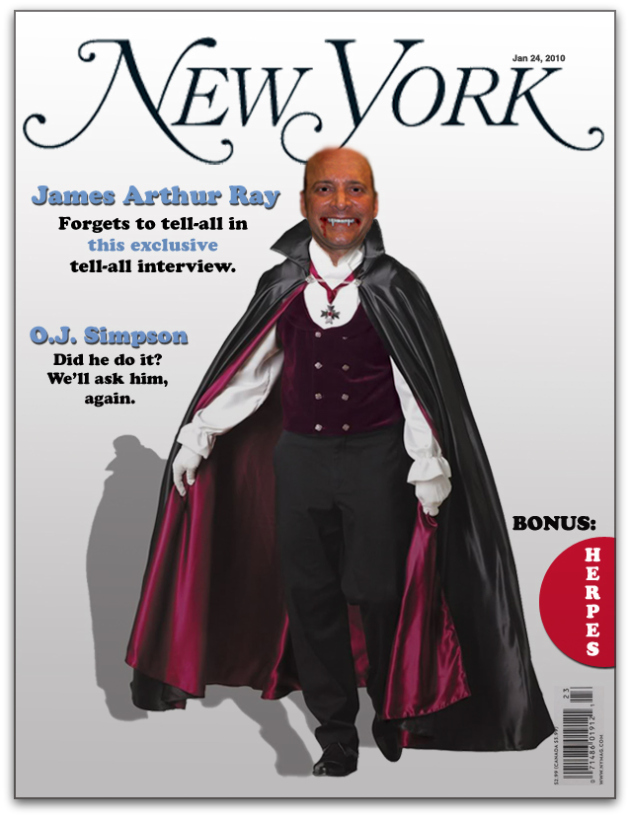 James Arthur Ray LOVES to do him some media interviews! He’s a whore’s whore. Where else can one sell one’s stinking demon oils to a massive global audience at no cost to oneself? ** Exactly!** Even if they occasionally {/almost never} make you sound a bit suspect :: you can still say that you were “Featured in Fortune” :: and the sheeple will be oh so fucking impressed. So bring um on! Today Show? Sure. Channel blah blah blah in Omaha? Hellz yeah.

In his first interview since walking out of a “sweat lodge” :: where his customers/students/marks were lying dead or dying on the ground :: and raising his hands in shameful triumph :: James Death Ray spoke with New York Magazine this Friday. Of course :: he needed to be nannied by his fucking lawyers. We wouldn’t want him slipping up and accidentally telling the truth {or saying that the holocaust was awesome}.

Show us what you got Michael J. Gross ::

“Overnight, James Arthur Ray went from being a star of the self-help movement to homicide suspect.

He was admired by Oprah and Larry King; a peer of Deepak Chopra and Tony Robbins; a teacher whose followers paid as much as $60,000 a year to attend his seminars, where his best-selling book, Harmonic Wealth: The Secret of Attracting the Life You Want, was cited as if it were scripture.”

Interesting that the article opens by referencing Deepak Chopra as a “peer” :: Droid commenters say that Ray used to tell a story about living near Chopra and being all chummy with him :: and Depox Crapra was also mentioned in reference to Ray on the aforementioned Fortune article. But Dr. Crapra has “never even heard” of James Ray :: Bullshit!

Q: Did the events in Sedona change your sense that you can help people remember what they’re capable of accomplishing?

A: The events in Sedona have been devastating to me and to all the families, and I feel horrible about what happened there and for the families and for anyone and everyone who’s been affected by it.

NO ONE cares about YOU but YOU girlfriend :: fly larvae are more sympathetic. And that is most definitely not an answer to the question. Question :: Have you changed your mind about your own godhood and infallibility? Answer :: Every time I change shampoos I find myself very disappointed.

He continues with the not-answering of that question …

Q: How has it changed your personal beliefs?

A: I don’t know how to answer that. That right now is not the important issue. The important issue for me is to find the answers to why it occurred and to really bring some closure to this terrible accident.

Right now that’s not the “important issue.” Right now it’s all about “answers” and “closure.” Of course :: five days after the Death Lodge tragedy the “important issue” was gettin’ mo’ mo-fuckin’ money. He went right back out on the blood sucking seminar tour :: business as usual. A PR cock-up that earned him no money :: but did earn him an irritated Salty Droid {has it been worth it so far fat boy?}.

Q: Did you raise your arms in victory at the end of the sweat lodge?

A: When I came out of the sweat lodge, I raised my arms up and they hosed me down.

Natch! :: As if anyone could get hosed down without raising up their arms. I mean please!

Q: Why didn’t you or anyone from your organization contact the family of Kirby Brown, one of the victims, until five days after she died?

A: Well I reached out to the families as soon as I could. What do you do in those situations? I think we all would like to believe that we would do the exact, perfect thing. Would I do some things differently? Probably. But I did the best I could at the time.

He reached out as “soon as he could” :: you know how hard it can be to find a phone these days. It was just dead people after all :: not something serious like credit card charge backs. And he’s going to get around to calling Colleen Conaway’s family too … just as soon as he can.

Q: Has your ego been adjusted by this experience?

A: It’s certainly been, as I said earlier, devastating for every single person that is involved. And shocking for the families and for everyone who’s been impacted like this. And so any kind of significant emotional event of this magnitude has to have an impact.

Q: What justifies the pricing of your events?

A: Well, I think the pricing is determined by the value that people perceive they receive.

dot dot dot … I suck out every penny and leave people for dead. It’s called “EVERYTHING” pricing :: and it’s simple and effective.

Twenty Questions :: Zero Answers = Public Relations Win?? [lawyer interjects] I think you’ll have to rely on the “White Paper” for that answer.