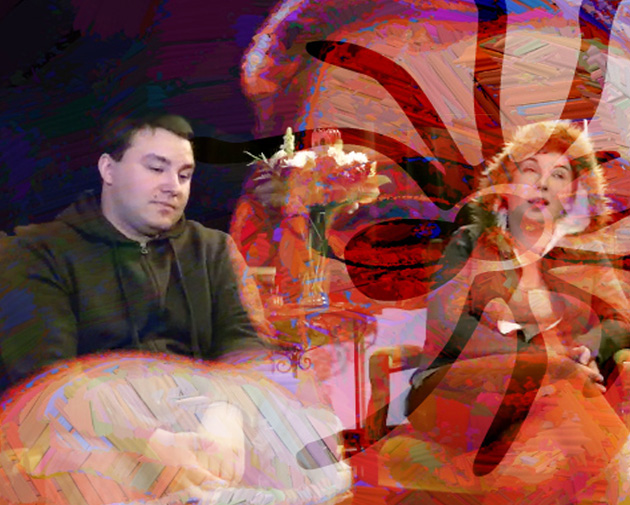 Have you heard about not-rocker Dave Navarro’s funny news?

So I have a bit of funny news for you. As of Monday morning, my heart and mind belong to IttyBiz. Which is a bit of a laugh for me because I’d swore I’d never take a “day job” again. But this is my last week as a free man. Come Monday, I work for Naomi.

Gosh :: I haven’t laughed this hard since the last time a piano dropped on my face … those were funny times.

Now, speaking of contractual obligations, the charming and handsome Dave Navarro has come over to the side of good and righteousness and will be an official member of Team IttyBiz as of Monday.

Team IttyBiz is a team :: and is on the side of good and righteousness … in much the same way that I was just laughing about a piano crushing my fucking face.

In celebration of this funny and righteous event I thought I might open up my Naomi Dunford file and pull out something turdish. See it’s good to fill a file full of turdish stuff before you open your robot mouth :: just in case some psycho starts accusing you of murderous crimes against humanity. Then later :: once the hard job is mostly finished :: you can just let that file drip … and drip … and drip … until the dumpy spider learns what “Game Over” means to a skank with no quarters …

Naomi Dunford :: I think the overwhelm is finally going to do me in. :)

I may finally be at that point where I’m like, you are SO not cut out for this, lady.

Dave Navarro :: Isn’t that generally “the dip” we have to push thru to get to the other side? I’m having those same scaries too just remember it wasn’t too long ago you were selling 2 hour blocks of time for $99 or something and you’ve come so far

Naomi Dunford :: Can you please just fast forward time to when you’ve released the thing so you can quit fighter jets and wave a magic wand over my life?

Does somebody have a fast forward button? Because I would pay good money for that.

Dave Navarro :: Oh, hell yes, I’d be on the Advance Discount List for that

Naomi Dunford :: In other news, I reread what I had so far on Marketing School and it’s the favorite thing I’ve done so far. I’m really proud of it.

Dave Navarro :: Oh, that “why we’re broke” thing was genius. Was muy jealous.

Naomi Dunford :: Yeah, that was pretty hot. But it was free. :) I like good things that people have to pay for better.

Dave Navarro :: Indeed, It’s a good product, I’d bet you could turn that into a big teaching sells course.

Off topic, kind of, I’d be breathing easier if Brian Clark would return my fucking emails. Sweating a bit about that one. He may flake out and I’ll need to find a way to work around that.

To my knowledge, he’s ignoring pretty much everybody.

Dave Navarro :: I should have scheduled an interview the fucking second he said yes

Naomi Dunford :: I want to get in touch with him for a far less noble reason, which is the TS affiliate stuff.

Dave Navarro :: When is payout on TS?

Naomi Dunford :: If it’s the same as Thesis, it’s the end of the same month. So we’d get paid out on the 30th or the 1st. But I have residual concerns that because of the dollar amount and return rate, they might make it later.

But I don’t know how to ask without looking like a whining infant.

Dave Navarro :: You could always wrap it in the “I’m trying to schedule stuff for the cambodian school” thing

Naomi Dunford :: That’s what Jamie says. But I’m lazy and burnt out and would rather keen in the bath.

Dave Navarro :: I understand. I’d rather do the same, except with a fifth of jack daniels and not a bath

Megan wants to know if you have an ETA on quitting LM.

We’re not looking for written-in-blood, just an idea.

Launch is 10/12-10/16. At that point I should (hopefully) have all the money I’d need to quit. The week after I have my trip to NY, and I’m planning on giving my notice immediately afterwards. Likely a 4-week notice.

I’ll try to make sure the place doesn’t fall apart between now and then.

Dave Navarro :: Though after the launch, I’ll have decidedly more bandwidth

As in, I’ll have made a bunch of money, so I won’t be hustling to make new products and I can start taking on IB stuff after I get back from NY

Dave Navarro :: I’m a little concerned if I can’t get Brian in on this.

Naomi Dunford :: M and I are figuring out a promo/launch schedule on Thursday, so we know what the fuck we’re selling and when.

Dave Navarro :: But I also know Brian isn’t the be-all-end-all but it’s a huge help if he’s in.

Dave Navarro :: it’s pretty frustrating not being able to go public with this yet b/c I can’t be sure if he’s in

I may just have to work out alternate people

Dave Navarro :: Well, I’ve dropped the hint about Brian on my blog, because I thought he was a shoe-in but Brian said he was getting Brogan, and I don’t see that happening now

Dave Navarro :: My hope is that my pre-launch contest will get a lot of affiliate action. I’m giving away a netbook, and ipod, a flip camera, and amazon gift certs. $1,000 of stuff.

Dave Navarro :: And if you’re up for it, we can use that $2,000 marketing package of yours as a grand prize

LOL - I’ll send you my own fucking flip! he he

Yeah, I’m game. As long as we figure out parameters so I don’t end up spending 4-8 hours with someone I can’t stand.

The key is going to be that if we give it to the highest selling affiliate, we’ll end up giving it to somebody who really doesn’t need it. So we’ll need to find a way to work it in so that it’s actually valuable.

I mean, Mark Silver doesn’t need me, you know?

Dave Navarro :: Should we offer it to an actual public person, not the affiliate?

Dave Navarro :: I think that for my affiliates, the $ is really the motivator that and jockeying for position, maybe

Naomi Dunford :: Brainstorming… I wonder if we could totally disarm them by being completely honest.

“Dave is about to become the xxxx of IttyBiz, but he can’t do that until his wife lets him quit his day job. He can’t quit his day job if this product doesn’t make a fuck ton. Therefore, Naomi is going to donate a $xxxx prize to the top selling affiliate. Yes, she wants Dave that much.”

Might be crazy, but it’s worth putting in the idea pot.

Dave Navarro :: My only fear on that is that if somehow Lockheed gets wind of that, they’ll stop letting me work from home and stop letting me bring in my laptop to work, which would totally sink my ability to make anything work.

Naomi Dunford :: if it just went out in an email to your affiliates…

Naomi Dunford :: We’d have to think of how to make it sexy. But yeah. Could work.

Dave Navarro :: Yeah, it’s just you know how nothing can be private on the net

I mean, I’m working with the most high0tech people around

They may just know and not care?

but if it’s hinted that I’m out, then boom

Naomi Dunford :: Well, it’s not that little boys dream of the day they can work for LM, you know?

Naomi Dunford :: It’s not like you work for the Catholic church.

We’ll keep noodling. I’ll keep keening and boring Megan. All will be well.

Hey, remind me what your target $ figure is on this?

As in, your portion?

Dave Navarro :: I’m hoping the fact this pops to $197 after launch convinces our peeps to get it at $47

Naomi Dunford :: Oh, hey, I meant to send you an email about this… I just remembered that you paid me out early last month for HtL, etc, so the payout this month isn’t going to be from the first like normal.

Just to put in your mental data banks.

Dave Navarro :: yeah, I paid a few days early, I think we only had a few sales for the rest of the month, was just going to wrap it into the next month;s payment to you if that’s cool. Or if you need earlier, I can do the math and get it to you

Naomi Dunford :: No, I just went through and eliminated Jamie’s and my affiliate portions and realized that the payout was going to be closer to $1800 than $1000. Which was pretty awesome. But I wanted to remind you that it goes from the 28th instead of the 1st. I’m sure you remembered, I just wanted to let you know while I still remembered. :)

Naomi Dunford :: Cool. Thanks. I have so much money going out this month, my breath is literally taken away.

This is the last month that we still have to pay 2k to rent in England, which is nice. But fuck, it’s been like we’re burning money around here.

Oh but no worries Neigh-Neigh :: cause you Dave are rich remember?