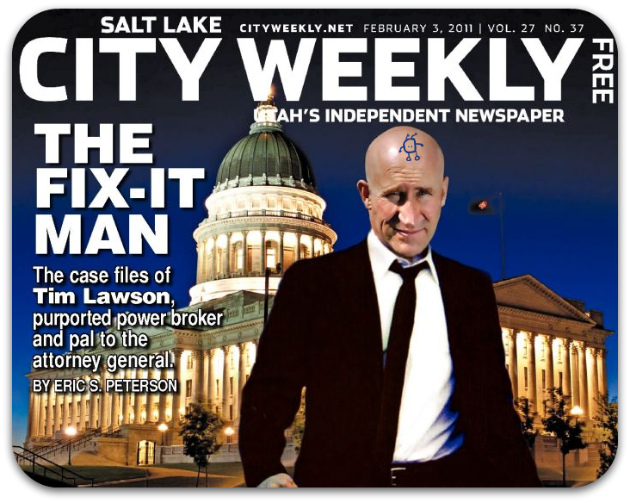 “Me and Mark are as close as two guys can be without being gay… We’re like brothers.”

Lawson is pretty sure that he got his “manager” position at drug crazed Mentoring of America due to his un-gay relationship with Utah Attorney General Mark Shurtleff. Lawson is so convinced of Shurtleff’s devotion that he goes around doing stupid shit like this …

Kitts says one text demanded he pay $7,000 or Lawson would see to it that Kitts landed in jail. When Kitts told Lawson he was threatening extortion, “[Lawson] said, ‘I don’t give a fuck what it is, I am untouchable in this state.’ ”

“I’m like Joseph Smith, I’m known for better and worse. I’m like a modern-day Porter Rockwell [Joseph Smith’s vengeful bodyguard]. I protect those people that I love and care about,” Lawson says, making both comparisons in the same breath.

In the summer of 2009, Lawson took Shurtleff to California for a vacation, at Lawson’s expense. “I needed a break and so did [Shurtleff], so I said, ‘Dude, let’s go to California,’ ” Lawson says of the trip, where he says he introduced Shurtleff to Lawson’s extended family along with a number of wealthy donors.

Shurtleff disputes Lawson’s take on the trip. “It was not a fundraising trip,” he says. Shurtleff says that he stayed with Lawson in California but that it was just to work on his novel, Am I Not a Man? about the life of Dred Scott.

You’d be surprised how long it takes to write a terrible half-english “book” that no one gives a shit about {days possibly weeks}.

“There’s a lot of people out there who don’t like me,” Lawson says. “I don’t give a flying monkey’s ass if they like me or not—this is America, they can go fuck themselves.”