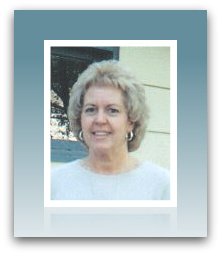 Colleen Marian Conaway :: a gentle and kind Midwestern Lady :: died on July 25th of this year. She plummeted over a third story railing at the Horton Plaza Shopping Mall in San Diego {link}. The case was treated as a suicide {link}.

Read a little bit about Colleen on the digital obituary and guest book signed by family :: friends :: and one person who was at the mall {link}.

Jumping a third story railing at an out of town mall :: landing almost directly on top of people waiting to get into the theater :: Really? Colleen Conaway, 46, from Park Rapids Minnesota? That is quite possibly the most punk rock suicide I’ve ever heard about. It’s ironic :: it’s poetic :: it’s super hardcore. I have 100% confidence in saying :: without any additional facts :: that’s not what happened.

But there are additional facts. Colleen was in San Diego attending the Create Absolute Wealth seminar put on by James Arthur Ray {only $4000}. 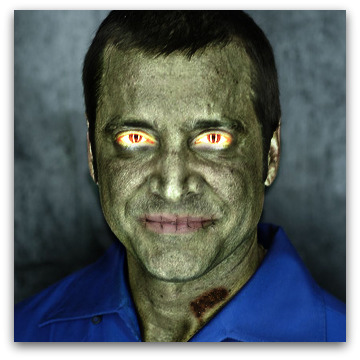 Colleen’s family and friends don’t believe that Colleen killed herself :: Because she so obviously did not.

From the comments on a CBS story about the sweat lodge deaths {link} ::

“Colleen was a happy and successful woman. Prior to her death she had absolutely never given any of her friends and co-workers any signs of suicidal thoughts/intentions. She was making future plans…had a positive outlook on life…and was completely healthy.

Colleen was brainwashed. She fell victim to Large Group Awareness Training. I believe James Arthur Ray and his company completely covered up their involvement in her death.”

In the comments on Integral Options :: a Buddha loving Arizona blog {link} ::

“This is not the first death at a James Arthur Ray seminar…I know that for a fact! A friend of mine died at one in San Diego this July (Creating Absolute Wealth). They did a great job at covering up Colleen’s death. I am sure they know what they are doing is wrong…if they didn’t they would not have worked so hard to hide the events/details regarding her death. Her name is Colleen Conaway and she died at Horton Plaza in San Diego during one of their excursions “exercises”.

Comments on the San Diego Examiner’s article about Colleen’s “suicide” :: all left before the current debacle {link} ::

“I think the group lead by James Arthur Ray has something to do with Colleen’s death. She was there attending a seminar. They use a tactic called Large Group Awareness Training to brainwash participants. Please do further investigation into this.”

“I have been working with Colleen for years now and I agree that this doesn’t make any sense as a suicide. Further investigation is needed. This isn’t fair to anyone who had the opportunity to be involved in this wonderful woman’s life.”

“My aunt was someone completely against suicide and her life was all about being positive … The only thing different and wrong in her life now was her envolvement with the James Arther Ray seminars. We are investigating this and I urge anyone with a family member involved with this guy to strongly question them about the goings on of this organization. Both on a personal and a financial level.”

Colleen’s name wasn’t released until two days after her death :: was that out of respect for her family :: or because she was found without ID? Forum poster The Anticult suggests {among many other interesting observations on this issue} that being stripped of your ID before going out on an “excursion” might be the standard operating procedure for these cult-type seminars {link}.

We know from TechCrunch :: And more interestingly from Duff :: That Ray was tweeting strangely ominous things during the sweat lodge events :: Which he then deleted shortly after the incident.

Here are James Arthur Ray’s tweets from the day Colleen Conaway tragically died at a mall far away from her home and family :: 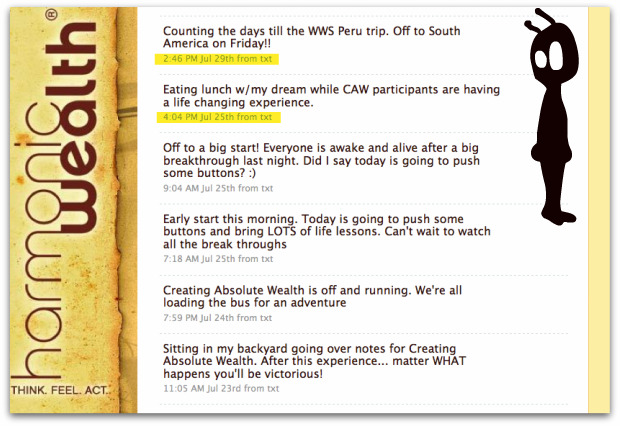 Right about the time Colleen is dying :: James Arthur Ray is having a sandwich {link} ::

“Eating lunch w/my dream while CAW participants are having a life changing experience.”

Then nothing for four days. NOTHING? Either tweets have been deleted … or something happened at the seminar that somehow managed to make one of the world’s most narcissistic windbags shut his stupid mouth about his own perceived triumphs.

Was Colleen at that mall in a state of intense malnutrition and dehydration like the people in the sweat lodge? Was she confused, disoriented, alone, or in a shock? Was she pushed or cajoled over that ledge?

Did James Arthur Ray and his “company” cover up the incident? Did they leave that mall with Colleen dead on the floor without her ID? Were they the “witnesses” that saw Colleen “jump?”

Only one thing is certain in my {highly informed} mind :: Colleen Conaway did not kill herself :: But her family was left to believe that she had. That is an unforgivable sin … and it must be righted immediately.