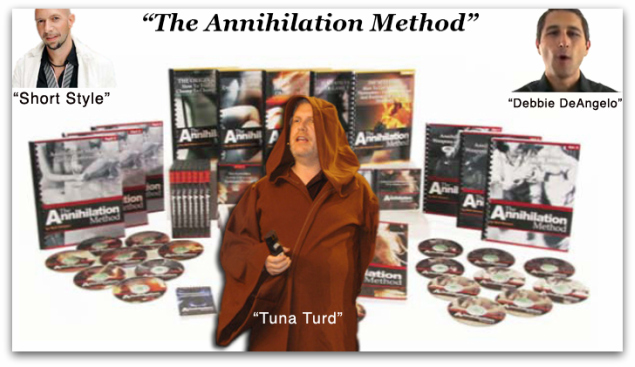 Not-Doctor Harlan D. Kilstein has very little to be proud of in his miserable excuse for a life. His “career” in education was suspiciously short and full of bridge burning failures. His unfortunate body shape {known as The Mutated Potato} makes waddling his tremendously lumpy ass a necessity. His digestive system was described by one imaginary {and quite unprofessional} physician as :: “An absolute cluster-fuck from cake-hole to anus.” And now his “career” in copywriting / Internet Marketing Guruing is coming to an abrupt and disastrous close {also after a series of bridge burning failures}.

But the Dumpy Beast does have one thing to be proud have :: The zenith of Harlan Kilstein’s copywriting career :: The sales letter for The Annihilation Method. 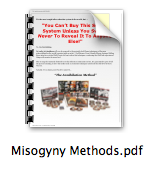 Naturally :: The Annihilation Method is about picking up women. How do you expect to find love and happiness if you don’t start each relationship with annihilation? I know! It’s just so simple you wish you’d have thought of it.

The Annihilation Method was the turd-of-the-loins of one Neil Strauss {also known as :: “Style” :: because all of these little douche bags give themselves nicknames}. Neil is a pathetic fucking hack who apparently devolved from a {bland and mediocre} writer for The New York Times :: to a soulless maggot feeding on the misery of others.

Neil wrote a pointless book about the pointless act of ‘picking up’ chicks at a bar. He gave it a grandiose title unbefitting its station :: “The Game” :: because he’s constantly compensating for other areas in which he is very {oh so very} fucking small. But the book :: like James Arthur Ray’s Harmonic Wealth :: is just the worm on the hook. The real money comes from selling the super-saddest on uber-expensive fake miracles.

Enter The Annihilation Method :: 8 DVD’s for a measly $4,000 :: It’ll change your life {mainly via oppressive credit card interest rates}. Harlan writes the sales letter :: and his number one man-crush Frank Kern does the other promotional shit.

“The Annihilation Method has proven to be the most effective and most powerful collection of pick up techniques ever to be produced.”

“So, after The Game came out, I decided to figure out EXACTLY what enabled me to become supposedly the best pickup artist in the world while other guys were still virgins, spinning their wheels.”

Supposedly :: that sentence wasn’t written by a sexually obsessed thirteen year old with a drawer full of his mother’s GrannyPanties :: supposedly.

“Here’s the problem I face: Frankly, I’m concerned The Annihilation Method might become too well known and get used without responsible guidelines.

That’s why I spent a fortune of copy protection software that my friends in the entertainment business use to hunt down file sharers and bleed them dry.”

Because only 375 copies of this Super Secret Unicorn System will ever be sold. The website is called only375.com :: and Kilstein emphasizes this “point” {in various grammatically suspicious ways}_ ad nauseum_. Of course :: it was available on the torrents within seconds {or before} its release. And now :: just three years later :: anyone can watch it on google video {link :: but don’t waste your time}. Not to mention :: file sharers don’t tend to have blood to bleed … and the entertainment business has completely failed to curb {or even slow} piracy.

Both of those sentences SUCK! Not because they’re embedded with NLP commands :: or because they contain calculated ‘errors’ meant to put the target at ease with the writing. They just suck :: because Harlan Kilstein is a lazy fuck who can’t write for shit. Some of you try and tell me otherwise :: But you are WRONG. The Not-Doctor can’t write.

“EXPOSED - A Woman Reveals How To Make Threesomes Happen!

“From Her Perspective - Inside Virgin Territory.

In this interview, the girl I’m talking to was a virgin with no thoughts of having sex before marriage… until I came along. In this eye-opening expose, we talk about the tactics you can use to win over the hardest cases.

Plus, you’ll discover how to do it with integrity.”

At the end of “The Game” {which I’d rather die than read} Neil Strauss apparently comes to the conclusion that annihilating drunk chicks in clubs is not a good way to find healthy and fulfilling relationships. He gave up “The Game” when he found true love. But then he unfound true love a couple of months later {because he’s a short :: scrawny :: bald :: insecure little prick} :: and dove right back in to the shallow end.

Another self styled ‘legend’ of the game :: David DeAngelo {Eban Pagan’s doubleD game nickname} :: Has moved on to greater things. His $3,500 get-rich-quick scam is currently being promoted by the circle jerking echo chamber. He learned some valuable lessons about business while lying to girls to get them into bed {and then lying about how effective others could be using the same ‘principles’}. Now you can learn to fail in business from the same spoiled bitch that taught you how to fail at life.

But Neil Strauss was never able to move on. He wrote the forward for fellow woman hating d-bag Mystery’s ‘tap-that-ass’ book {creatively titled :: The Mystery Method :: get it?} :: and he wrote a sequel to his original turd called Rules of the Game :: which is like the Betty Crocker Cookbook of being a complete DickHead. If you’re seeking some misery :: I’m sure you’ll have a chance to see washed up “Style” at a spectacularly overpriced seminar near you.

As for Not-Doctor Kilstein :: I think his time would be better spent in thoughtful reflection upon this tome …

Rules of the Game: Grammar Through Discovery

… lord knows he needs it.