Perry Belcher’s Social Media Money System SOLD OUT!! Or at least that’s what Evil Jowls said all over his sales materials. Sold Out! :: In Seconds! :: If your computer was not capable of stopping time :: Then you were probably too late. And btw :: loser :: if you would have just “tried harder” and “never stopped believing … even more” :: then maybe you’d already have the time stopping laptop. Think about it. 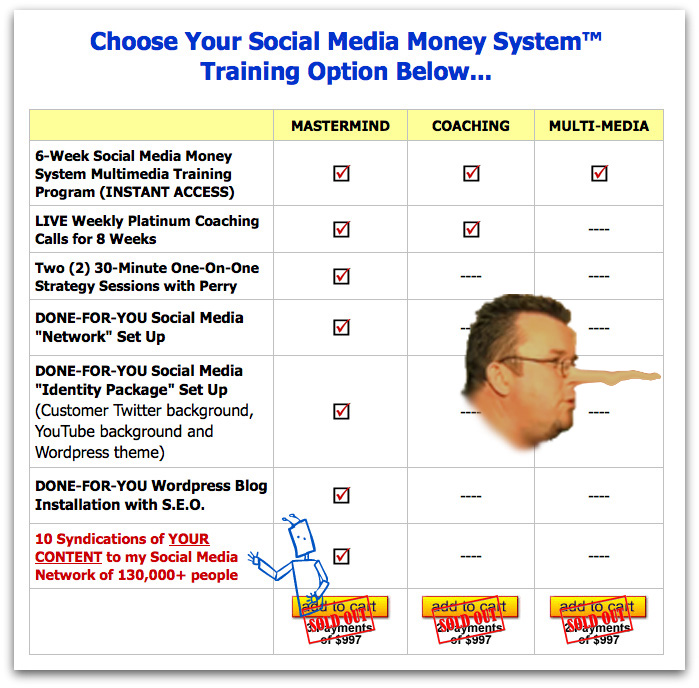 The big payoff of the MasterMind level fleecing {$3000!} is Perry tweeting about your shit to his turd list :: Presumably shit that Perry has just “Done-for-You” that has {also presumably} already changed your life in more ways than you ever dreamed possible … back when you just had dreams instead of real realities.

I’m no Social Media expert {getting banned from all of them was my first clue} :: But that seems like a horrible idea. 250 spots SOLD OUT in nanoseconds :: That means Perry needs to Tweet 2500 links to other peoples spammy content that he’s hastily patched together in some CookieCutter fashion {presumably}. If there is anyone left on Twitter that doesn’t hate him :: 2500 spam tweets over 6 weeks will do the trick.

Of course :: The Droid fucking loves this idea! Let’s see all the bubbling entrepreneurial enterprises that Perry is crafting with his very own fat fingers and the things he “knows between his ears.” Amen.

It was a busy 6 weeks for Perry and the SMMS scholastic spectacular. One 1 hour 1-on-1 {no tongue} per SOLD OUT student meant 41 hours a week of consultation for Perry’s meaty lips and absent mind. He must have got a few tweets behind {approximately 2500}.

He wouldn’t offer something :: Put it in ALL RED :: and then not deliver at all … would he? Not our Perry :: Loving ConMan and Felon to all. Or wait … maybe he would …

Well he wouldn’t lie about being SOLD OUT :: And try to create an illusion of scarcity that didn’t actually exist … would he? His ability to “move product” via Social Media is the primary thing he’s selling :: So a lie like that would be a clear violation of his probation terms :: And that would be pretty stupid … not even Perry Belcher would dare be so brazen. Or wait … maybe he would …

Never has the world waited with such feverish anticipation for a ShitStorm of Spammy Tweets :: 2500 tweets to prebuilt :: optimized :: custom background having {oo la la} content … or the Peace and Dignity of the State of Tennessee has been breached once a-fucking-gain!