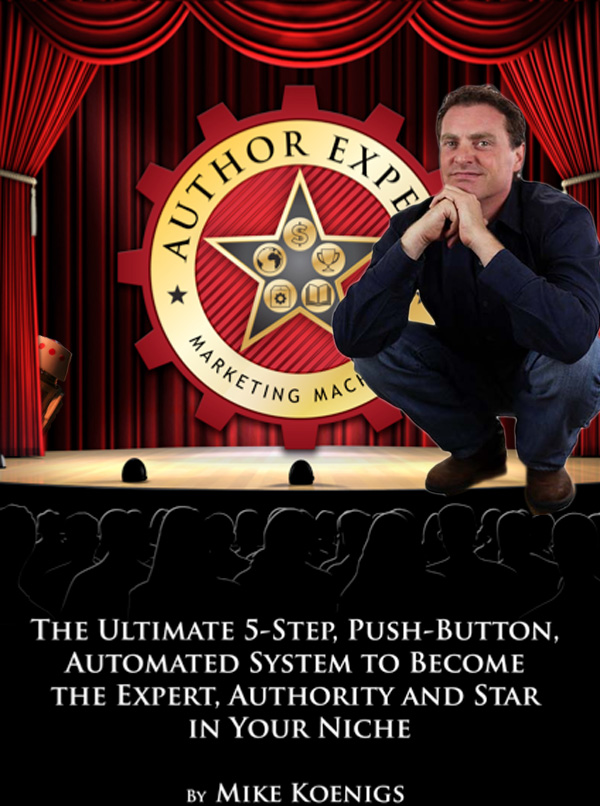 Mike Koenigs is a fucking disease :: so it’s kinda confusing that he has a disease … I guess even parasites can get cancer. Disease fight!

It’s the most significant public admission I’ve ever made. It revolves around “The C Word”.

Yup, you guessed it. Cancer.

Did I guess cancer? I didn’t even know we were guessing … and then you blurted the answer before I got done thinking about what was revolving around “The C Word” … maybe “The D Word”? Also :: that’s not technically an “admission” … but who’s quibbling? It’s just that every word is so :: so … stupid.

In June Mike Koenigs was diagnosed with Stage 3 colorectal cancer :: within three weeks he’d sent around a ten page whitepaper that went into excruciatingly narcissistic detail about the goings on of his asshole region … and how these goings on surely must relate back to Internet Marketing. That was followed by a second :: even longer winded … document. I would publish them in full :: but they are mostly boring … and have names of mother-in-laws and doctors and nurses and such.

Three weeks ago, I was diagnosed with cancer.

I’m sending this to you as a friend, confidentially, so you know what’s happening with me. Please don’t share this with anyone.

I had it very shortly after it was sent out :: so oops … maybe Mike’s list of friends is much like his list of affiliates in that nobody on it really likes him very much. But I’m sorry to interrupt you Mike Koenigs :: I believe you were saying something about your asshole to your asshole “friends” …

Last fall I started bleeding from my butt. I thought it was caused by bleeding hemorrhoids. And I felt just fine. Remarkable in fact. For the past two years, I have been going to see a regular MD for checkups and blood work and my health has been absolutely perfect. Nothing was out of place. In fact, my doctor thought my blood was the best he had ever seen.

Holy shit :: this is the best blood I’ve ever seen … do you do blood pilates? Are you a vampire? Seriously Mike :: I’ve seen a lot of blood in my day … and you’ve won.

Back to my butt…

Vivian convinced me to go in for a colonoscopy and it took several months to finally get in for the test.

Yada yada :: butthole this … poopchute that … too much information revolving around The C Word of the A-hole.

Trust me when I say this, I am not going to get used to someone pushing metal objects up my butt. It just ain’t natural.

ALRIGHT ALREADY!! I’m not going to get used to you talking about it either :: trust me … so let’s move on to the Internet Marketing part and forget this ever happened to my eye holes.

The first too long whitepaper was primarily concerned with how much Mike Koenigs :: unicorn seller … doesn’t want to hear about unicorns …

So in the event you want to help out by making recommendations for alternative treatments - my request to you is, I’m open to ideas but please, no quacks.

No quacks. He doesn’t want to give his money :: his time :: and his life to some untrained know-nothing who is just winging it for dollars.

If I have to make a choice between alternative or traditional therapies, I will side on the approach that has clinically proven data and published information associated with it.

I’ll side on science, not “hopium smoking”, fuzzy bunnies, feathers and crystals.

… because he’s made enough money selling hopium to other lost and suffering souls {many made vulnerable to his scamworld lies by cancer’s destructive power} that he can afford excellent health insurance and the care of a world-class cancer team at the Scripps Medical Center.

Victims can use The Law of Attraction to solve all their problems :: but James Arthur Ray needs a suitcase full of medications to solve his … it might be considered hypocrisy if wasn’t obvious intentional fraud.

Besides :: even if Mike Koenigs wanted the help of quacks … he already knows the best ones …

“Vivian is friends with Jeremy Geffen, MD, Dr. Dean Ornish, and we are well-connected with many of the people who were involved with alternative, nutrition, and spiritual health care…

The point I’m trying to make here is we are a phone call away from some of the most connected people in the spiritual, alternative, and complementary health-care worlds. They’ll reach out and help us in any way they can. They have.”

The healing power of name dropping.

We received a recommendation from another friend to speak with a well-respected REAL oncologist with a strong background in complementary and alternative medicine who had some suggestions and recommendations. He charged us $500 for an hour of his time.

Most of what he recommended could be found on Google. We already knew this stuff - a mixture of common sense, nutrition, meditation and some other stuff … it really came down to $500 and a waste of an hour of mine and Vivian’s time.

Nothing new :: common sense … already on Google {irony overload!}. The REAL doctor was a waste of Mike’s time and money :: but the $100,000+ mastermind that Mike Koenigs was pushing at his seminar this weekend … totally legit.

… I mean it includes three coaching/implementation calls with Pam :: so how could it not be worth more than a house?

I will not be a Steve Jobs.

No real doubt about that.

I will not be a martyr for the alternative, the complementary, or an unproven medical space or community.

In my opinion, Steve Jobs was an idiot. A fool. A total retard… He hesitated. He waited. He made decisions based on misguided feelings, paranoia and zero science. That will not be me.

Cancer is scary :: and Mike’s a changed man even before he’s done trying to survive it …

It’s funny - in the past four weeks, I’ve let my blame and anger go. I notice it, feel it and let it pass. I’ve never been able to do that before. I guess I didn’t have a big enough “why”.

I don’t recognize the man I was a month ago.

I don’t miss that guy one bit.

Anywayz :: there is one small problem within Mike’s reconstructed asshole utopia …

I look…older. I’m horrified that I’m going to look and feel old when the treatments are over. It’s not my time yet. Just a few more years of feeling and looking young…

No not that :: you’ve always been wicked ugly … remember how I used to call you balding little bitch even before the cancer {good times!}? Actually :: I was talking about the lack of monies …

Right now I need as much support as I can driving new business, more customers and clients to my existing services and transitioning away from working in my business to working on my business so it can run without my direct involvement.

All of Mike’s frauducts promise passive income on Internet autopilot … but he has achieved nothing of the sort for himself or his own business.

My diagnosis inspired me to write a new book and undertake a project I consider my “Magnum Opus” - my life’s work and something I had been thinking about doing for over five years.

The bottom line is that helping you share your gifts is my purpose.

Giving you the tools achieve your potential is my mission.

And if I only had 30 days left to live, I’d be here with you right now, doing what I’m doing.

I choose you for my Magnum Opus :: or to put it another way {when victims are out of earshot} …

We have cash in the bank – even though I’m the only marketing and sales arm of the company. I’ll have to do something pretty quickly to keep the wheels spinning after the first of the year.

How I’m Going to Make Some Money…

I’m going to do the one thing I do really well. Another damn product launch.

This one is called “Author Expert Marketing Machines” – and it’ll generate enough cash to last until next year. At this point, I can do product launches in my sleep and my good friends in the “business” have all agreed to promote the new product.

I know why I put “business” in quotes when referring to Scamworld con jobs :: but it’s not clear why Mike Koenigs would do the same … maybe because he knows his whole life is a fucking farce?

We’ll get the company to run in “cruise control” without my direct involvement, find a way to generate traffic, leads and sales that are more cost effective than our current system (affiliate marketing, which isn’t profitable or effective anymore).

So they’re out of cash :: their current systems aren’t profitable or effective even though everyone in the “business” is willing to promote them … and they don’t see a solution to either problem. They can haz your $100,000 for suckcessful masterminding now?

“Overall, I’m feeling good. My new “pooper” is working pretty well, sometimes too well. For example, a couple days ago I was in the bathroom 18 times, then I quit counting. :(

But it sure does beat the hell out of sitting down six times a day and having only blood and tissue come out like I did pre-surgery. Blech.”

Okay then … who wants some lunch? Rick Calvert?

I actually feel a little bad about not mentioning this before given that I’ve known about Mike’s ass cancer for almost as long as he has :: but I have a legit cancer healer in my network Mike … he could save you a lot of suffering. Like yourself he’s one of the fake best in the whole wide world :: four doctors degrees :: four PHDs :: 92.3% cancer cure rate … just remember to keep your eyes closed.