Silencing of the Lambs 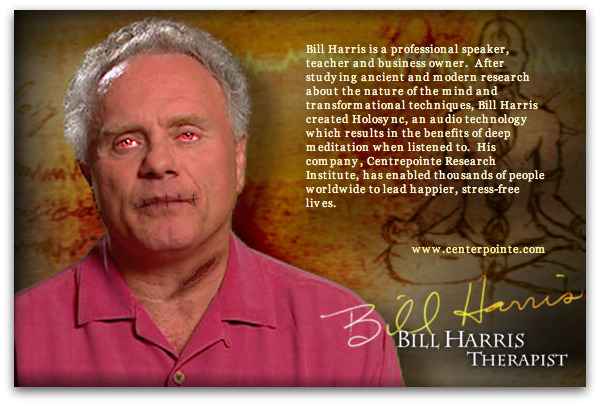 A lot of citizens say that Bill Harris {product of The Secret Turd Factory} looks like the classic stereotype of a sleazy used car salesman. He’s bald but still uses a blow dryer :: his fat fat puffiness has been concentrated by rage into rock like density :: his breath stinks of coffee and pig balls :: he looks older than he is … bedraggled … worn out from years of hustling old ladies into Chevy’s that died as soon as they left the lot. Okay :: fair enough. But he could also pass as an unsuccessful evangelical revivalist who has been forced to take a job stocking shelves at Wal-Mart after an incident with a 16 year old boy and a Honda Civic.

Used-Car Bill sells a big sack full of shit called Holosync :: James Arthur Ray made Holosync a “mandatory” part of many of his seminars {and took a huge piece of the profits I’m sure}. Holosync is all over the schedule of the Spiritual Warrior DeathLodge event. The frauduct fits a depressing pattern that should be sounding all too familiar to readers of The Droid. Unqualified twat holds himself out as an expert :: offers a $2000+ product that will change your useless life overnight :: product is specifically aimed at a vulnerable demographic :: manipulative and aggressive marketing :: circle jerk {probably antitrust violating} cross promotions with other self proclaimed “gurus” :: aggressive suppression of dissent.

Bill Hairless meets ALL of my targeting standards :: and is just the sort of pretty lady I’m out hunting :: but he finds himself on the brink of a VERY FUCKING SERIOUS situation today because of his disgusting and unmanly repression of reasonable dissent.

Friend of the blog Duff McDuffee wrote a post about Bill Harris and Holosync this past November. It’s a great post :: and I recommended you read it. Bill “What’s it going to take to get you into this 2002 Chevy Tahoe today?” Harris certainly read it. He was so impressed that he decided :: as a first step :: to have his lawyer threaten to sue Duff if he didn’t take the post down.

… not cool {or ethical}. They demand that the post be removed :: a prominent retraction be posted to the first page of the site :: and “written assurance” be provided to the “law firm” that Duff will sin no more against Bill.

The King of Dicks followed up with this pure threat email ::

You have recently been served with a cease and desist letter regarding your defamatory and untrue post about me, Centerpointe, and Centerpointe’s products. My lead attorney has been in Europe and has just returned this morning and is waiting for my go-ahead to file a Federal suit against you for defamation. I’m sending you this email as a courtesy since we know each other, at least through correspondence.

Perhaps you do not realize the severity of the consequences for the defamatory statements you have made and how a Federal lawsuit to enforce those rights would work. The costs of such a suit will be huge, both financially and also in terms of time and stress. Legal fees for such a lawsuit can be, at minimum, over $150,000, the time commitment will be extensive, and the stress will be enormous. It will change your life in a way I suspect you will not like.

I am not itching to sue you, or anyone else. However, I can’t let you post untrue, scurrilous, and defamatory comments about me or my business. Some naive readers might believe you, and that effects my reputation, and it effects the livelihood of my employees.

I understand that for reasons of your own you don’t like me and you believe that Centerpointe products don’t work. You are welcome to your opinion, and you are certainly entitled to post your opinions online. However, you are not legally allowed to defame me or lie about me which you have done in a most egregious way.

So think this over, Duff. If you want to pursue this, we can. Such a legal action, however, is quite likely to consume your life and your bank account, and will be highly stressful. My reputation is important to me, and if I am forced to defend it in court , you’ll leave me no choice but to take this matter to the finish line. I respectfully suggest that you comply with the letter you received, put this behind you, and go on with your life.

My attorney is standing by awaiting my call. At this point you have a short time to decide what you want to do with the next several years of your life.

Look before you leap.

I’m not even going to address how ignorant and stupid that is until my “lead lawyer” gets back from awaiting my calls in London.

Notice that the threats are about how inconvenient :: stressful :: and life altering a lawsuit can be. There is absolutely ZERO substance :: they don’t even point to the facts or statements that they consider defamatory. That’s because he doesn’t give two shits about the merits of the case … his bogus practices couldn’t stand the scrutiny of the discovery process … and he has no intention of actually suing {if he did he’d go to a litigation firm and not some no-name corporate IP firm whose website still uses fucking frames}. He’s counting on the fact that 90% of people will back down from a legal threat … no matter how baseless it might be.

So far Duff has admirably refused to back down as Bill impolitely counted down his false deadline via a series of rude emails. The deadline of fake doom is set to run at end of business today. Will Duff take down the post? I hope not … but I’m going to make it irrelevant.

It has come to my attention that you royally suck. You have issued hollow and limp legal threats to a former customer {and genuinely nice guy} who had the audacity to suggest that people should think critically before dropping more than two thousand dollars on a bunch of useless 1980’s CD’s that are done cheaper {and better} by almost everyone else.

I understand that you’ve become accustomed to using threats to maintain absolute control over your completely contrived reputation. But the times … they are a changin’.

You have 24hrs to notify Andrew McDuffee that you have decided not to pursue legal action against him :: or you are going to have a MUCH more serious problem than one measly post by a mild mannered and fair minded gentleman. I WILL END YOU and your transparent fucking scam Bill Harris :: with elegance and ease. It will consume your life :: your bank account :: and it will be HIGHLY stressful {ask around}. Your deep {and probably intimate} connection to Bringer of Death of James Arthur Ray :: the obviousness of your swindle {including new FTC reg violating testimonial based sales} :: and the surface ugliness of your soul make you a low hanging fruit for an anti-scammer on a roll. Don’t fucking temp me … don’t.

Think this over Bill. Look before you leap.