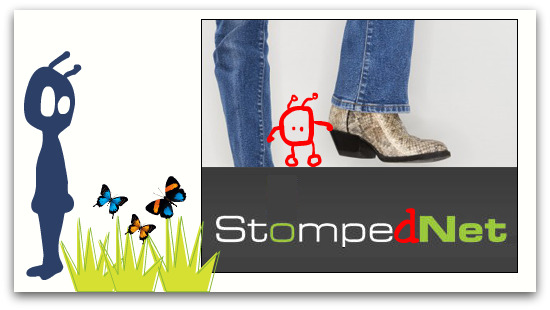 StomperNet is a monthly membership site that offers access to SEO and “training” materials relating to building an online business. Stomper has an air of legitimacy not present in many of the other scams I write about. They have a staff and actual offices :: Their websites are shiny and glossy :: They call their BS tactic instructors “faculty” {gag!}. But ever-so-slightly below the surface is the dark heart of a beast.

The Beast collects a toll :: Monthly Membership Fee –> $800 :: Bang! :: That’s $9,600 dollars per year to access a website, receive some nominal amount of “coaching,” and attend a quarterly live “conference” {WARNING :: coaching = selling you stuff // conference = selling you stuff} In case you need some perspective {and you probably do because you don’t read enough books} :: The average annual cost of attending a fully accredited public university is $6,585 {link} :: 30% less than a year of “stomping.”

StomperNet is a partnership between Andy Jenkins and Brad Fallon. The company launched in 2006 and claims to have done $12 million in sales in the first 12 hours {link}. Shortly after the launch :: Fallon stops helping … but keeps taking. Andy does almost all of the work and is the public face of StomperNet. When I arrived on the pathetic scene in February of 2009 :: People were saying that Brad was no longer a part of StomperNet at all.

So it was quite a shock this July when StomperNet announced that Brad had bought out Andy {link}. Andy was leaving the company and Brad was taking over as the active CEO. What what what??? That makes no sense. Why?

“People are speculating like crazy about what kind of behind-the-scenes dramatics went on, but it’s something far more boring: I was ready to pass the StomperNet baton in order to work on other stuff. Brad was ready to take it.”

Yep! That’s boring :: But not as boring as this long rambling post he wrote about it {link}. It’s **6500 **words about himself :: the biggest narcissism wank-off since Napoleon bumbled into Russia. Hey Andy :: you do understand that you aren’t actually an important person right? Remember how that’s all just an illusion that you yourself have created? Posers who are sucking the life out of the Universe are politely asked to keep their posts under 200 words. Haven’t you done enough damage?

“The only fireworks are those we see happening online with all the gossip and rumors.” chuckles Brad Fallon “Frankly, we were surprised by how much everyone cared! Happy…but surprised.”

Then last week someone pointed me to this site :: stompednet.com :: Lo and fucking behold it’s a pdf of the complaint in the case of _D-Bag v. EvenBigger D-Bag _:: The author of the stomped site asks a simple question ::

“Did Brad Fallon buy out Andrew Jenkins to make this lawsuit go away?”

OMG! That is a crazy document. On March 27th, 2009 :: Andy sues Brad. Here are the claims :: translated from Pointlessly-Boring-Lawyer into Hipster-Droid-Speak >> bleep

Shazamm! I don’t want to write a 6500 word post like EgoTrain Andy :: But allow me just a few more comments ::

a) Brad is a total asshole. Stealing money from your 50/50 partner :: From a business perspective :: That’s an unforgivable sin. If you are soulless enough to commit that hideous moral crime :: there is no business crime which you wouldn’t be willing to commit.

b) StomperNet is in trouble. Deep deep trouble. In Andy’s response to the posting of this pdf he says {link} ::

“StomperNet was an EIGHT FIGURE COMPANY according to its 2008 tax returns. This was about being short $110,000 in the specific operating account where payroll is funded from – and not knowing about it.”

Nope! That doesn’t make sense. Bad lie. The suit says that day-to-day operations were threatened :: that checks were going bounce :: that vendor relationships were threatened. Lawsuit Andy is also highly perturbed about the loss of Stomper’s line of credit. That shit just don’t jive with $12 million in 12 hours :: or EIGHT {all caps} FIGURES in ‘08.

High quality rumor says that Stomper peeps are being paid with IOU’s :: or are taking pay cuts {link}. People other than Andy are leaving {link}. And everyone knows that Brad is a train wreck :: He can’t do what Andy was doing. $800 per month is totally unsustainable in this climate :: And Brad has spent the whole year promoting stuff so crappy that even the sheepish IM world is crying foul.