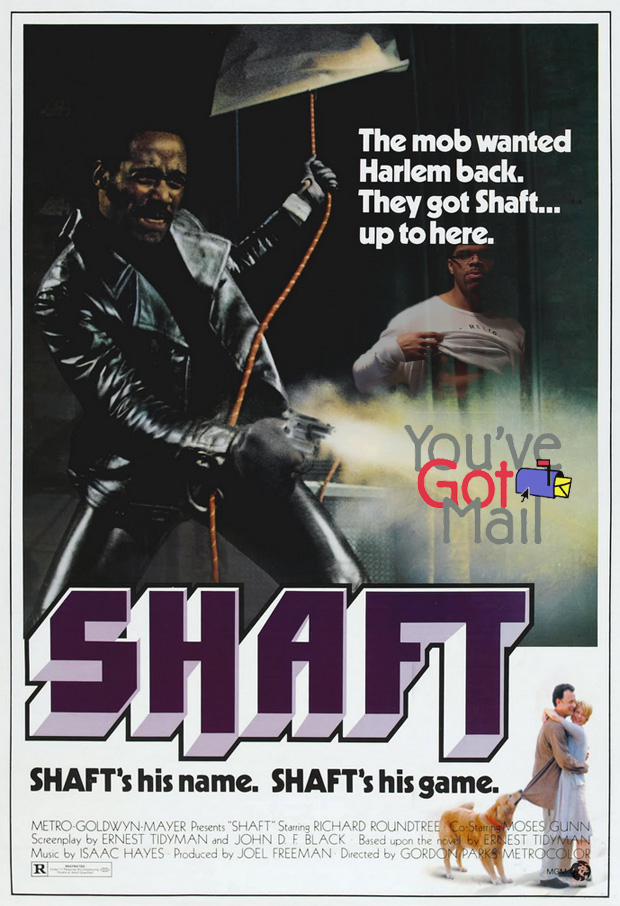 The failed techno-blaxploitation of what was to become the uncoolest of uncool tech companies == funny.

You thought you got mail :: but you got Shaft … up to here.

Anywayz :: I’m sure it wasn’t funny to the people involved … and they’d like to smack my face off. But investing money into new {or old} business ventures is a great way to lose money. Most businesses fail :: often due to the mistakes and miscalculations of their overpaid founders and executives.

“I don’t think this is too much to say this really is a historic merger; a time when we’ve transformed the landscape of media and the Internet. AOL-Time Warner will offer an incomparable portfolio of global brands that encompass the full spectrum of media and content.”

“To call the transaction the worst in history, as it is now taught in business schools, does not begin to tell the story of how some of the brightest minds in technology and media collaborated to produce a deal now regarded by many as a colossal mistake.”

If you want mistake free businesses :: you best hire only robots … because humans are forever fucking everything up. Failed business ventures don’t feature on The Salty Droid because failing isn’t a scam … failing is just the most usual reward for trying.

Black America Online wasn’t the worst idea in the world :: people had the dot-com fever … and way stupider ideas were making stock market millions. The idea had enough believers and backers to get some non-trivial financial support … and some free press. There was momentum :: it was an opportunity … and some of the people involved were excited about it. But the man with the plan was a parasite who would go on to prove thousands of times over that his sole concern lies with his own immediate {vain and shallow} material desires.

Stephen Pierce’s involvement in Black America Online meant that things were only ever going to end badly for the company … or worse. And while Stephen had no problem moving on to his next scam without the faintest hint of remorse :: his non-scammy family was left holding the bag … and dealing with years worth of fallout for his inexplicably selfish actions.

Thomas Pierce was the IT brains behind Black America Online. While Stephen failed to graduate from high school … Thomas graduated from college and has had a long career as an IT systems architect {or some such thing}. His wife Rosetta is an attorney … and they’re now living in Florida. After many years of remaining silent as the Black America Online story continued to reappear and fester in association with Stephen’s ongoing shenanigans … Thomas decided it was time to say something.

Here are Thomas and Rosetta talking to Jason about Black America Online :: and the role played by the Pierces not named Stephen …

Getting your Mom and Dad sued :: and then walking off like it ain’t no thing … priceless. But that was just the beginning of Stephen Pierce’s epic disrespect for his own proud family.

Everyone in Internet Marketing knows that Stephen Pierce is the ultimate rags-to-riches story. Kicked out of a troubled house :: high school drop out :: homeless :: shot … but now a millionaire via the magical power of Internet unicorns. Here he is telling Gideon Shalwick all about his homeless to millionaire program …

Hundreds of thousands of unsuspecting people heard the hard knocks story while Stephen Pierce was sharing the Get Motivated stage with the likes of Bill Cosby.

Overcoming adversity to succeed is a good story :: but it’s not a true story … at least not for Stephen Pierce.

Stephen Pierce’s parents rose up during dark times for black Americans offline :: carving out a solid platform inside a less than welcoming middle class America … from which their kids could hope to push on to even greater successes. They kept their family together during good times and bad :: serving our country and enduring the many sacrifices required of career military service {including 82nd Airborne in the jungles of Vietnam … hooah!} … and providing support :: guidance :: and a constant example of right living for their children.

Stephen’s parents have the truly inspirational story … but he gladly discarded it like so much rubbish in favor of a narcissistic fantasy where he overcomes the problems he was lucky enough not to have.