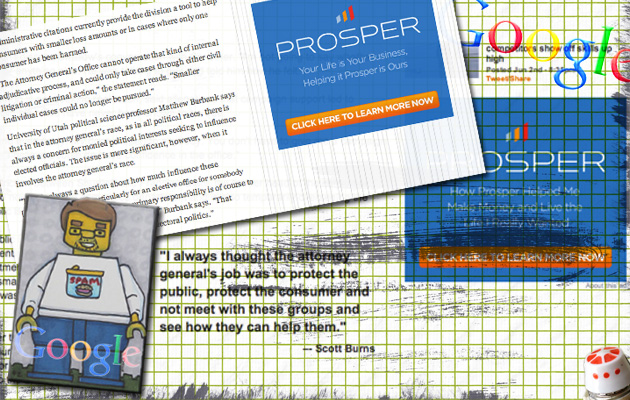 Something wicked this way comes :: let’s be blunt … it’s Utah. You’d think they’d be extra not wicked :: what with even their underwear wearing codified and regulated :: but no … they’re totally wicked. Utah is the heart of darkness :: but you fuckers don’t care … my multiyear ball busting Utah coverage is about as popular as not cussing {aka not fucking popular}.

But I’m the smart one … and y’all the ones who told me there wasn’t a syndicate in Internet Marketing. Utah matters in this fight … the mostest. So I went right quick to read Eric Peterson’s John Swallow has some balls article … and then the Salt Lake Tribune’s frontpage follow-up. While reading both articles :: Matt Cutts and Google served me the above {and below} ads for Utah’s Prosper … a boiler room … and the current focus of my fake affections.

Prosper has boiled down leads for many of this blog’s favorite anti-fucking-heros. For example :: until recently they were part of a Get Motivated / Stephen Pierce scam-three-way that was grinding down Get Motivated seminar participants by the thousands … and producing millions of dollars per month for the sick machine.

And of course :: the twice removed King of the Gnomes Mike Filsaime … was recently telling us about how awesome Prosper was compared to all the other couple hundred dozen boiler rooms that he’s mouth sampled in his quest for GnomeProfits dot com. I asked his royal {twice removed} Gnomeness for some success stories of the sort he might be compelled to provide if he wanted to comply with the FTC’s {or many state} BizOp disclosure rules … I guess I’ll just keep waiting for that.

Part of Vitale’s appeal is that he combines spirituality and metaphysics with making money; hence the title of his book, Spiritual Marketing. Among the services he offers his students is a $7,500 joy ride around Austin, Texas, in his 2012 Fisker Karma all-electric luxury car (he used to hold classes in his Rolls Royce Phantom, but he’s since gone “green”). I’m still not sure if it’s the chance to spitball with the author of Your Internet Cash Machine, the fancy dinner, the Karma’s reclaimed wood interior, or a combination of the three that makes this trip worth six months’ rent.

Harris slaps Vitale’s fat face as hard he can {it leaves a big red welt}. Then he’s all like :: “Stop the car, I’m getting the hell out of here.” As he gets out he spits on the floor of the car. “You’re a god damn criminal you Mr. PotatoHead mother fucker” :: sayz Dan as he gives Joe the finger with his left hand while tucking his right into his fashionable bomber jacket pocket for effect … some Aerosmith song starts playing.

… but no that didn’t happen … and instead ABC made a Secret Millionaire program so that the same mind game motherfuckers could hawk their fraudtastic wares to a national audience free of charge.

Anywayz :: Google’s disclosed and undisclosed tracking systems rightly assume that saltydroid@gmail.com is interested in fraudulent unicorn hustles :: and pushes me ads accordingly … I’ve mentioned it before. The Prosper ads {which will be costing them a fortune to run} lead to a video sales page that screams …

How Prosper Helped Me Make Money and Live The Life I Really Wanted.

Prosper is literally going to change your life :: you don’t need anything but a credit card … and a deep underlying sense of sorrow.

These lies are supported by a video testimoanial of the sort that the FTC forbids in its rules … and then ignores in real life.

Ivan hit the big time with Prosper coaching. He was a school teacher working two extra jobs to support his gym :: tan :: laundry lifestyle. Then he gave Prosper a bunch of money after they pretended to give him a job interview … and now he’s living the life that Princesses Diana didn’t dare to dream. He’s so successful that he and his wife can afford vacations {complete with pictures} :: and …

“We’ve been able to save enough money, that my wife and I, at this point really do not have a concern about what happens if something happens.”

They’re so financially secure that even “if something happens” … they’d be totally fine. Doesn’t even matter what kind of something happens … totally fucking fine. How did they achieve this feat in a highly competitive online environment where almost nobody is making money?

I’m glad that I pretended like you asked that … the Wizard of Math is how! Wizard of Math is a website that sells educational items via Amazon.com and its behemoth web and IRL infrastructure. The Prosper coach told Ivan and his wife that their life changing money-making website should “sell something you’re passionate about” … because that’s what it said in the Prosper script and the “coach” isn’t someone who’s had success on the web or in business or they wouldn’t be a “coach” at some scammy ass company in Provo.

You can’t “sell something you’re passionate about” :: unless you’re passionate about something where you hold some definable competitive advantage … in which case lucky you. But “I was a teacher” is NOT a competitive advantage :: although it is a nice thing and I offer a golf clap {you should have been paid more in the first instance Ivan Levine}.

Go to the Prosper success story Wizard of Math site now :: and pay $2.49 for your DAZZLE STICKERS JESUS …

Wizard of Math can’t compete with Amazon in the dazzle jesus market … or any other market. Wizard of Math has never had any web traffic … and it never will. Many brainwashed bumble brains created new accounts on The Verge in order to leave Scamworld comments like …

“So I guess Amazon is a scam now too huh Joe Flatley? I see your selling a Kindle book so yur the scam. I’d give Frank Kern my daughter.”

No Amazon’s not the scam :: you poor demented little d-bags … they’re the winner. They’re part of the reason why “… you can’t make money” is such a fucking truth. From the Wizard of Math about page …

This site hasn’t been touched for years :: and yet Prosper is paying Google to pay the Salt Lake Tribune to tell me that it’s a life changing success story … and you can too!

When a person starts to nibble at the edges of the get rich quick nightmare :: Google knows … and immediately increases the frequency and perceived legitimacy of the temptation. The average web user doesn’t understand how the intentionally opaque ad networks operate. And the average oldster new to the web {often the target demo} is accustomed to a real relationship existing between a local paper and their advertisers. An ad for Prosper on a story about John Swallow being a scammer would seem to imply that the editors of the trusted old school source don’t think that Prosper is a scam.

It’s a dirty fucking trick :: and one that Google has run on fucking millions of vulnerable Americans during a horrible time for us … and a fucking sweet ass profitable time for them. Yes that sentence has three fucks :: but I mean … come on!

The Google AdSense admin panel allows publishers to opt-out of Google’s self-acknowledged evil :: but it’s set to “co-conspirator” by default … 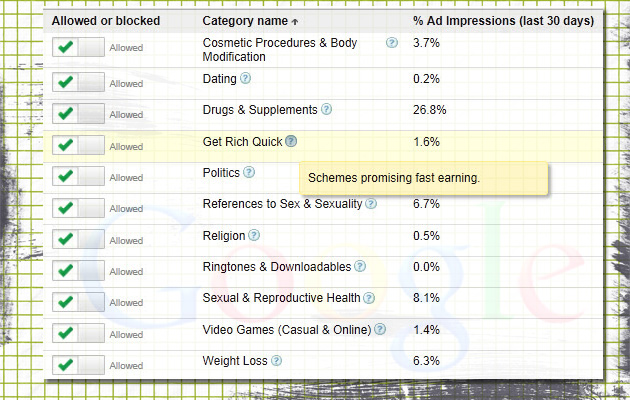 All the scammers at least have the decency to pretend that they’re not the “get rich quick” sort of scammers :: but Google doesn’t want to bother with the pretext … cause they’re a big fucking deal and above the law … unlike poor black folk who can suck it.

“They’re get rich quick schemes :: and we sell them … deal with it.”

If it’s too good to be true … it probably is. My least favorite thing to hear people say given the total complicity of almost every aspect of our society in this clear and obvious scam. Everyone looks the other way while the dirty money is rolling their way … and then pleads ignorant innocence and slinks off in silence when the consequences start to manifest {to use a word NotDoctor Joe would fully approve of}.

I’ve previously mentioned Mittington Romney’s close ties to Utah fraud :: and Utah fradusters … most especially the members of Utah’s deeply disturbing political order. Tonight Mitt makes the Hajj to his holy land to once again stroke the darkness for dollars :: from The Verge …

This evening (June 8), Prosper CEO Randy Garn will join Nu Skin founder and chairman Blake Roney and “some of the best entrepreneurs in the country” at a $2,500 per person reception for Mitt Romney — $10,000 per person if you want to get your picture taken with the presumptive Republican nominee. In a 2011 article, Mother Jones magazine singled out Blake Roney as one of the multi-level marketing (read: pyramid scheme) heavyweights that constitute “Romney’s biggest backers.”

The fake robot didn’t hear about this fundraiser from The Verge :: but rather from the Stephen Pierce co-founded “marketing group” SANG who … typically … promoted it as a “networking” opportunity.

Since proximity is power, here are just a few of the people who will be there.

One of the most forward thinking entrepreneurial governors in the country, Governor of Utah Gary Herbert, Senator Orin Hatch,, Blake Roney-The Billionaire founder of Nuskin, Josh James-the founder of Omniture who recently sold his company for 1.8 billion dollars. I have been told a lot of very successful entrepreneurs will be in attendance.

Proximity is power :: and yet as a society we’ve taken to regularly giving the devil proximity … whenever and wherever it will give us a boost to the bottom line … or a half roll of nickels.

Prosper CEO Randy Garn :: co-host of tonight’s Romney fundraiser :: isn’t a shady businessman … he’s a parasitic fucking joke. He deserves to be hunted by the government :: but instead he’s been embraced and held out as an example of success by a Utah fraud machine that long ago stopped thinking about the human misery which is its sole meaningful export.

I’d like to see the fundraiser money returned :: and Utah cleaned up :: and a change in policy by Google :: and one fucking ounce of compassion shown by society for the millions of already vulnerable people scarred for life by an experience with this “industry” that we’ve all long enabled … but I won’t.

Because dirty money is still money … and what can the broken do but cry?