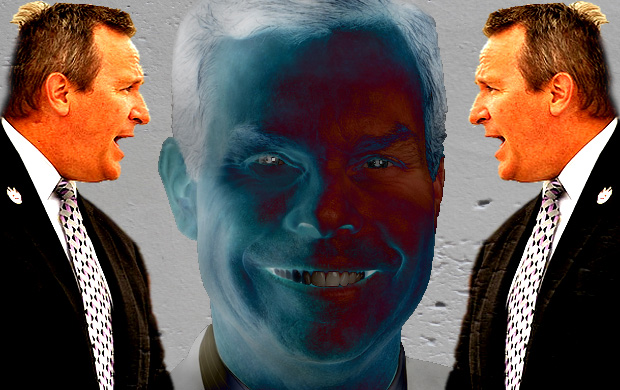 Of course the Attorney General is the state’s top legal enforcer :: tasked with prosecuting criminals rather than representing them … but that was back before the the bizarro world ate the real world.

The Salt Lake Tribune reported earlier this year that Swallow was getting most of the money for his campaign from Mark Shurtleff :: or Mark Shurtleff’s shady as the devil donors.

The other leading Republican candidate, Chief Deputy Attorney General John Swallow — who has the endorsement and major financial backing of his boss, Attorney General Mark Shurtleff — raked in $324,710, with Shurtleff providing slightly more than 40 percent of it from his own campaign accounts.

Swallow drew heavily from dietary supplement companies — most prominently Usana and NuSkin — and real estate and wealth “coaching” companies that have traditionally been big supporters of Shurtleff. Swallow had worked as an attorney in the supplement industry before joining the Attorney General’s Office.

“Supplement companies” dot dot dot “coaching companies” :: that’s one way to put it … the wrong way … the way that ignores the math … and the facts … and avoids dealing with the ugly ugliness of the truth … that the whole State has sold itself over to the soul destroying fake power of the pyramid.

Utah’s not a Mormon state :: it’s a Pyramid state … which is oh so much fucking worse.

Eric Peterson at City Weekly :: who was covering this story before the fake robot existed … published a mind blowing audio and article today that should be the beginning of the game changing.

It needs proper framing :: but almost no one can provide that framing because what makes a call like this so mind blowing is far beyond any outsider’s ability to imagine. You really need to be a Scamworld insider :: so I’m going to help … by doing something I usually don’t do.

In my opinion :: just taking a {I’ve lived and breathed this every second for three years} random guess … here’s what’s prolly happening in this call …

Aaron and Ryan are boiler room syndicate b-teamers. They float around from one shell to the next … always on the edge of fucked. They get trickle down leads and responsibilities from the bigger players :: and hey maybe they can be the fallguys if need be … you don’t want any precious A-teamers taking any falls.

[Aaron and Ryan] approached City Weekly earlier this year out of concern that the state’s regulation of the telemarketing industry is unfair and inconsistent. They also objected to the recommendations made to them by owners of other companies in the industry to ingratiate themselves with state politicians through campaign donations.

They think the A-teamers are using the power of the state as a weapon in “the game” … to keep newcomers from threatening the established powers. That seems so unlikely. Campaign donations with wink winks and looks the other way? Of course. The apparatus of the state actually co-opted into the racketeering process? That’s some old school shit right there … no way.

And yet this audio happened. Aaron calls to talk about his enforcement problems :: without subtlety John Swallow implies that he and AG Marky Mark can take care of this little problem … and that under a Swallow regime pesky Consumer Protection would be put under the dirty vulture wings of the Attorney General’s office.

This is how current overlord of Consumer Protection :: Francine Giani … is pictured feeling about giant asshole sellout pig John Swallow … 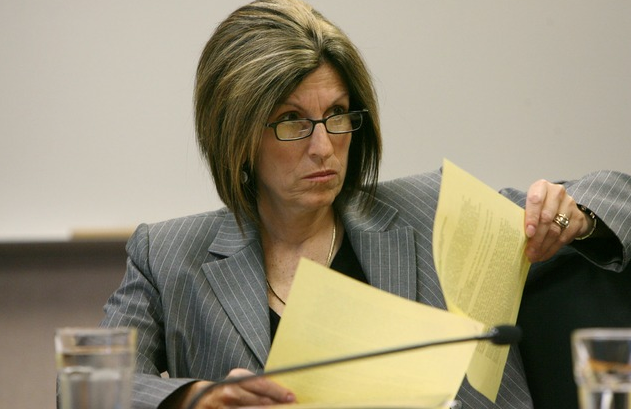 Gov. Gary Herbert’s office said Friday that he’s not interested in restructuring Utah’s consumer protection after attorney general candidate John Swallow told a potential donor in trouble with regulators that he would seek to take over the division if he is elected.

Yeah … not the point.

John Swallow doesn’t want to restructure Consumer Protection either :: they’ve already got things well under control for their crooked “clients” … and even if he did … why the hell would he be talking about it with some boiler room B-teamer?