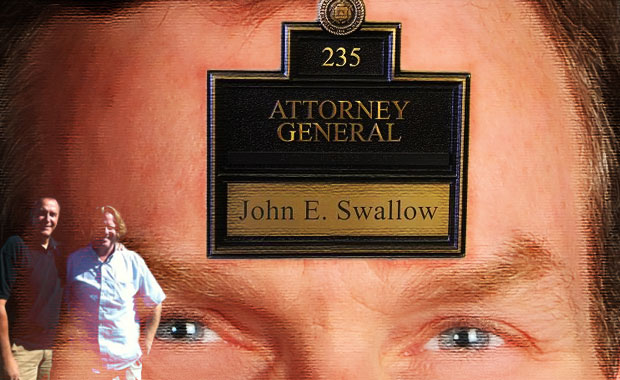 Jeremy Johnson is totally innocent :: just kidding … he was going to accept a plea deal that had him only doing 10 years in prison rather than the 12,000 years he’d need to do in order for his time to be commensurate with his fucked up crimes.

… I’d tell a joke about it :: but I’m sure you’re already laughing.

The plea deal fell apart :: with Johnson wanting a list of people the government would agree not to prosecute entered on the record at the last moment {unorthodox} … and the government not wanting to do that even though not prosecuting fraudsters is their specialty.

On Johnson’s list was Utah’s new Attorney General :: John Swallow … which seems odd because you’d expect Johnson to be hating Shurtleff & Swallow right about now :: for failing to deliver on the no enforcement zone. But then he dropped his ginger bomb on The Salt Lake Tribune …

While Johnson said he believed Swallow had done wrong, he still wanted to protect Swallow from possible prosecution. Johnson said a Federal Trade Commission lawsuit against himself and I Works plus a criminal charge had ruined his life and he did not wish the same fate on Swallow.

Gonna have to give you some props on this one GingerKing :: that’s pretty fucking hardcore right there. And it gets even better …

“Swallow and Johnson then met on April 30 of last year at the Krispy Kreme doughnut shop in Orem, according to Johnson. Swallow said he believed the meeting’s purpose was to persuade him to encourage Rawle to return the money.

Without Swallow’s knowledge, Johnson had the meeting photographed and recorded. Photos show Johnson and Swallow seated at a table facing each other.”

“The people of Utah deserve to know if their elected officials are crooks or unethical,” Dabakis said.

Can you have non-crook elected officials when your State is the world’s largest exporter of fraud?

Take um all down with ya JJ :: and call me in the morning.