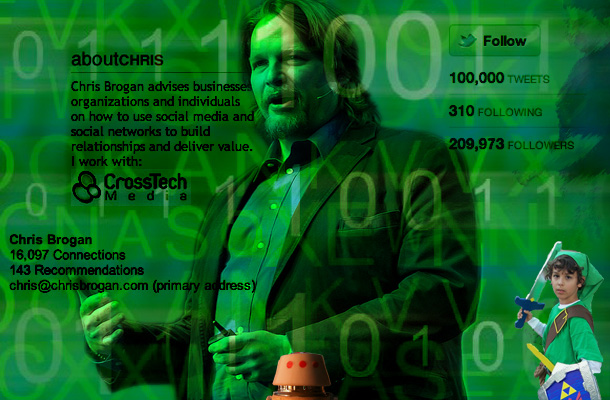 Chris Brogan isn’t fond of bragging :: it’s just that bragging is what he does for a “career” so it’s become a bit of a habit … you know?

Chris wrote a post about The Verge’s Scamworld article :: from his home well inside Scamworld … because that’s how we fucking roll in Scamworld. Self-awareness is an impediment to crime-based-pseudo-success :: never forget that … but remember not to remember that you’re remembering it … or you might start feeling guilty about being such a major asshole.

… but it’s titled Why Trust Agents Did So Well.

I’m not fond of bragging. Though I can be as prideful as anyone, I just don’t see the point in it. So when I start my post with that title: Why Trust Agents Did So Well, I owe you an explanation fast.

He’s prideful :: but not for any particular reason … it’s a delicate balance.

Scamworld features nice old ladies getting fucked over by boiler rooms :: baby boomers being exploited by red neck syndicates … and a trained professional down on his luck getting taken for almost everything {including his family}. So in spite of the rock stupid syntax of that third sentence :: I guess I will be waiting for my explanation regarding the narcissistic titling … fast.

“I just finished watching this video, “Scamworld,” which goes with this huge post about bad internet marketing, false schemes, and all kinds of deception. I will first say that I didn’t read the entire post, but that I feel it’s an important one to dig into (so I’ll get it all read in the next few days). The video is a decent way to see the thrust of the concerns raised on the article:”

He didn’t read the whole thing! He sells himself as an expert on Internet Marketing :: but two weeks wasn’t long enough for him to read a feature article on a major website calling out his whole “industry” as 21st century snake oil? I guess reading is hard for Grogans like writing is hard for Gnomes.

I very much liked Danny Sullivan’s article talking about it and adding his perspective. I respect and admire Danny a lot, and when he puts his thoughts onto something fiery like the world of internet marketing, I listen.

I’m not fond of bragging :: but that was more of a retraction than an article … because people are not feeling like now is a good time to fuck with me Chris Brogan. Yet here you are :: all fat :: and dirty :: and groganish … pasting me … the MOTHERFUCKING SALTYDROID {not to brag} … into your goddamn scam blog as a way to distance yourself from the very thing that you are.

And where the hell is my explanation about your sociopathic titling?

I believe Trust Agents sold so well because Julien and I said this, “be who you really are, connect with a community, learn how to take what you know and can do and make THAT serve you, connect people to each other, practice the art of being human, and band together to make your goals happen.”

Totally … not worth waiting for.

So Trust Agents sold well because it didn’t say :: “hey go scam the fuck out of people” … like all these other lousy get rich quick scammers are also not saying? Makes sense to me :: you imagine yourself to be not like you imagine them to be … you’re innocent via imaginary science!

The other reason Chris Brogan isn’t like the scammers being called out in the video :: by the guy whose consistently called Chris Brogan out for being a scammer … is that {like Naomi} Chris is barely getting by financially.

I am not rich. I live in a 955 square foot loft in a very small town. My television (which is plugged into a Wii and a Blu Ray player) is about 26″ across, I think. I own one car. Most of my clothes come from the Men’s Wearhouse and Target … I didn’t get rich quick.

See he’s not a scammer because now that the house of cards that copyblogging built is collapsing all around him :: he’s willing to admit that he never was successful in the first place … ipso facto … innocence … QED.

The sad thing is (as someone pointed out in The Verge article’s comments section) the people who need to know this information won’t ever see it or read it. I recently taught an intro social media class for the local community ed program and was simply astounded about what my students DIDN’T know. We spend all day in the online world so we know what to look for – people who don’t are so susceptible to quacks.

The sad thing is Susan :: even when the people who need to know this information do see it … they aren’t always able to hear it because they’ve been slowly brainwashed by quacks.

So you were just going to pretend that it wasn’t me in that video … and that I hadn’t repeatedly called you and your little “circle of friends” out for similar bullshit?

Very strange choice … let me know how it works out for you.

Fun! They look bad when they don’t let my comments print :: but they look worse when they do … it’s a scammer lose lose!

Point to a scam of mine. You might not like some of the people I spend time with, but if you’re against get rich quick types, you and I have no disagreement there.

Yep :: I don’t like the people you spend time with … but that makes sense because my whole point is that it’s all one big sick machine … and that no man {or fat chick in jodhpurs} can have success alone … because everything is about cartels :: gaming social proof … and the manipulation of group trust. You should read all about it on The Salty Droid and then maybe you’ll be better at pretending that you aren’t it.

I’ll let Copyblogger’s Jon Morrow explain it to Grogan {with a dash of help from Irwin} via video :: because I know Chris is a slow reader and I’d hate for him to feel like I’d failed to “point to a scam of his” like I so gladly agreed to do …

Dave Navarro knew that it was all about the french for trade union :: so he made a frauduct primarily intended to suck up to the blogging about blogging A-teamers … much like Bedros Keuilian was described as doing in The Verge story that guru Brogan didn’t have the time to read …

Whether or not he meant to, Keuilian hit upon a basic truth about how Scamworld operates. It’s by accessing the inner circle, and by working with them on your product launches, that you make money. The unconnected masses making up most of the IM community, those outsiders who create the social proof enabling the big players to rake in the profits — they don’t make a ton of money. And they definitely don’t make money through buying Internet Marketing materials.

Commanding a one-on-one fee of $22,000 a day, Chris Brogan knows exactly how to build massive levels of trust in his audience - and he teaches others to do the same every single day.

So I guess he only has to work a couple of days a year to afford his tiny condo and Target priced pants … curious then that fellow A-teamer Naomi Dunford would describe him as “pimping every hour god sends” … maybe pimping doesn’t count as work to Grogan.

$22,000 per day comes out to $2750 per hour :: more than five times what a top-level services professional could charge … fat Chris must really know lots of important stuff about setting up a Twitter account and stuff.

“May I pause and say something about bios? They always sound so arrogant and pompous. They are this moment in time where we’re supposed to brag about ourselves so that you think we’re worth your time.I’m worth your time. If you’re stuck having to read this to a crowd at a conference where I’m keynoting, hopefully, this will be easier.”

He has 12 years of experience in online networks, social communities, and other elements of digital business.

Oooh that sounds like something :: or nothing … one of those.

He has 16 years of enterprise telecommunications and wireless experience prior to all this.

Blogged since 1998 (when it was called journaling).

So journaling since 1998 :: that must be super impressive to his 8th grade English teacher … not sure it qualifies as a resume blurb. Here’s some headers from Chris Brogan’s back in the day journaling experiences …

… most of them are focused on Chris getting less fat :: something he never achieved … he also didn’t achieve success in blogging about getting less fat. Just why Chris Brogan is considered and expert on using social media {or whatever the fuck} :: is a bit of a french for trade union gaming social proof mystery {the boringest of all mysteries}.

You know that I’m a professional speaker, and you maybe know that I charge quite handsomely for my efforts, as I put a great deal of effort, experience, and ability into my work on stage. My US speaking rate is $22,000, and I charge $30,000 overseas (plus air and hotel).

His speaking rate is the same as his one-on-one rate … that makes sense … because it’s all bullshit so why not say whatever the fuck. He didn’t “get rich quick” :: but he can charge $22,000 for what he wants … when he wants … and how he wants.

What if I said that you could book me for as little as $4650 plus air and hotel. WHAT?

Still sounds like a horrific screw job to me.

Buy 300 copies of Google+ For Business … and SHOW ME THE RECEIPT, and you can schedule me to speak at your event or corporate meeting in 2012. You must buy the copies through either 800 CEO Read, Amazon, or Barnes & Noble through the US channels ONLY to take advantage of this offer (as the goal from my side is to push sales of the book).

After years of being in the follow back :: follow spam … herd of gutter trash Twitter gamers … Chris pulled the final tweet scam lever and unfollowed everyone he’d ever followed. The implicit deal he’d struck with thousands of other desperate souls no one cares to listen to :: broken … so he could look like the sort of person who could attract 200,000 followers without relying on total bullshit meaningless tactics.

I did this primarily because I was getting crushed by direct message spam. I chose to follow that many people in the first place, because I felt that reciprocal following was polite. However, I came to realize that I wasn’t actually seeing anything that anyone was posting.

It’s with arrogant self-importance that Brogan presumes to call social media the “human digital channel” :: but his actions betray a total lack of respect for that whole “human” part. The Internet is a series of fake numbers that fake Chris can use to pad his fake resume.

Chris’ “human digital channel” no longer utilizes LinkedIn for the purposes of connecting with the “mostly larger companies” he advertises himself as servicing to the n00bs to whom he services with $22,000 photoshopped head shots. Social media for business guy dumped the biggest social media business network … 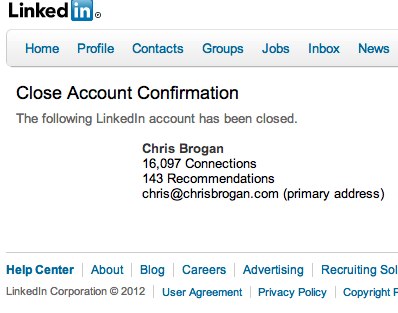 … after he gamed it so far beyond its intended use that it ceased to function.

I’m not fond of bragging … but I just finished writing this article.