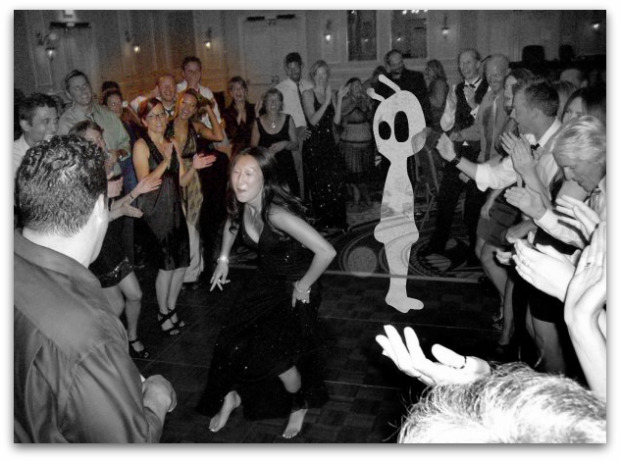 It’s July 25th, 2009 :: James Arthur Ray’s Creating Absolute Wealth seminar is not going very well :: which is to say … someone is dead. Dead … as in … not coming back to life :: game over :: no respawns :: holy fucking shit someone is DEAD dead. Not a few months or a year after being bankrupted and manipulated by a useless seminar series. She’s dead right RIGHT NOW :: In the middle of an outrageously irresponsible ‘game’ :: on our watch. What should we do?

James Ray International Staff: Great idea big guy! We’ll call it a ‘Gala Celebration’ and there will be much merriment and pretending. That sounds so much easier than finally coming to terms with the risks so inherent in our ultra-aggressive human hating strategies {which sounds totally lame}. LET THERE BE DANCING!!

Pictured above are two members of James Ray’s very small staff :: Megan Fredrickson and Michelle Goulet :: Partying it up on the night of Colleen’s death. Colleen’s body lies unidentified at the city morgue after being left behind at the mall by JRI.

Michelle called Colleen’s phone at 8:15 saying that they were :: “looking for her and hoped that she was okay.”

But they weren’t looking very hard :: because there was this fancy party to attend. Pretend dress-up and uncomfortable dancing is an important part of Ray’s ‘important mission.’ It can’t be interrupted by something so trivial as someone ceasing to be.

It seems cold :: and cruel :: and foul :: and despicable :: and loathsome :: and deplorable :: and belligerently evil. But to be fair :: they did later drop Colleen’s stuff off with the medical examiner and leave … and that was 20 minutes they could have spent doing something else {like closing sales} … so you know … there’s that.

Not convinced that The Droid is a threat worth placating and then running frantically away from? Then read these 100% genuine testimonials from others who failed to heed similar warnings ::

I can say, without hesitation, that The Salty Droid ruined my life. And not just because I’m a clinical sociopath who can say anything without hesitation. This robots ‘work’ genuinely destroyed my life. Pointing to my fraud :: mocking my massive lard ass :: constant references to my milk filled man boobs :: it sounds fun but it was all very painful and humiliating. I was building a small cult and calling myself a “Rock Star” for fuck sake :: Now I’ve been driven into hiding :: Living a small unhappy life :: Asking my cats to retweet my links.

Run away from this Droid. Leave everything but your collection of cowboy shirts behind (if you happen to have such a collection) and run away right now.

I can barely swallow my food. Everything I eat just mixes with white hot acid and then comes careening back out my lie hole. When I look at my family, or myself in the mirror, I just start to openly sob. Is it possible to run out of tears? How did I become this disgusting?

He told me to stop. I ignored him. I sent my boys after him … and then my lawyers. He ignored them.

Now I’ve exposed myself to the law :: to the viciousness of my colleagues :: and to numerous lawsuits for my > I find myself wanting to eat pudding and watch NASCAR until I fall into a coma and die.

I highly recommend immediate surrender. Do it for your colon.

You guys have got to get centered with your spirits and definitely your whole, like being, and other parts of you that are like good that you think shouldn’t be ruined just by someone who doesn’t have an Attraction Mentality. This is definitely one of the top things I tell all my students who love celebrities which is what I was until later when this Droid turned all of my dreams into awake nightmares.

This dirtbag goes around peeing on all the wrong people.

I tried everything I could think of to stop him.

This can’t be happening to me.

Running from this Droid is shortcut to the top.