Empower Network :: Revenge of the Wussies 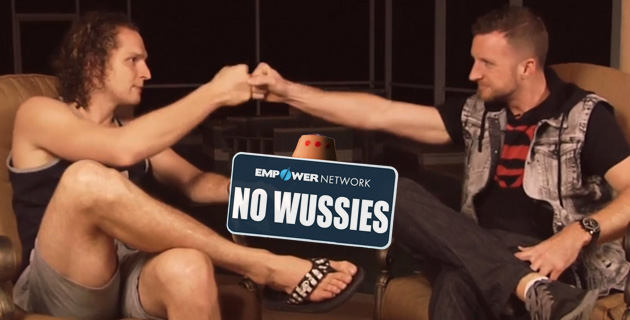 In the world according to {dumbass} David Wood :: there are only two types of people out there … badasses and wussies.

Badasses go “all in” by pumping $6000 into Dave Wood’s bare naked pyramid scheme :: the Empower Network … while loving every minute of it.

There’s a few steps for making a lot of money in Empower Network. Number one - get in. If you ain’t in - I mean - do you not love your family? 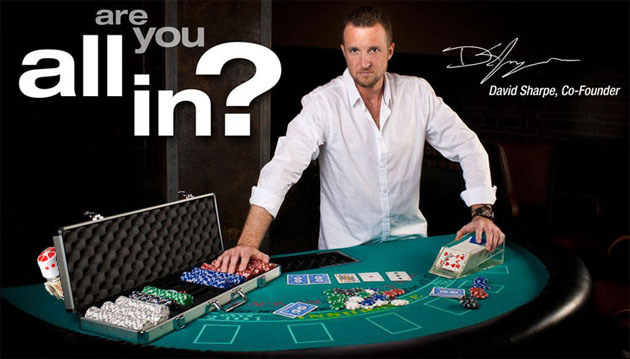 Okay :: not really … but I could end it there because … holy fuck … that’s so scammy. That’s so awful. That’s so blatantly exploitative and wrong.

Yet Wood and his badass partner in badassitude :: David Sharpe {mini-Mike Dillard} … claim that Empower Network is sucking in tens of millions of dollars each year. Sadly … that’s the only one of their many staggering claims I find believable.

The basic fake back story behind Empower Network is that David Wood used to be homeless living in a van {down by the river} :: and now he’s totally fricking rich in the most badassest of not wussy ways … and you can too!!

a) spam from Empower Network affiliates

b) people asking me to write about Empower Network

FREE! Download Right Now… “The SAME EXACT SYSTEM two ex-homeless men used to make $464,913.00 in 3 months – all online, on complete auto-pilot ….without ever picking up the phone!”

But the “EXACT SYSTEM” that the ex-homeless dumbasses used to get auto-pilot rich :: was making themselves #1 in a long tail pyramid of hype and lies :: and by the time you’re reading about it in spam from Bosnia … it’s a bit too late to fill that #1 spot yourself.

INSIDE The True Story Of How 2 Ex-Homeless Guys — Made Six Figures And Helped Over 130,000 + Normal People Like Myself Delete Our “Inner Wussy” And Earn Over $20 MILLION In Commissions Online In 2012 with 100% going to the Affiliates. 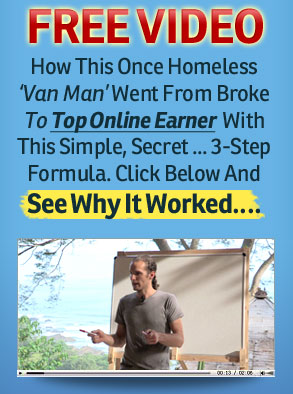 Empower Network sales materials say David Wood was struggling to make it at various jobs and MLMs :: to the point of homelessness … until 2009 when he discovered the Internet and became an instant winner.

3 1/2 years of getting kicked out of Wal-Mart had yielded a grand total team of 15 reps, a closet full of Soap and Vitamins, a four foot box of ratted out ‘motivation’ tapes, and…

…not very much money getting, at all.

Fast forward a few years later… I sponsor 4,000 reps in 24 months, helped build organizations of 13,000+ customers in 56 days, do a $2 MILLION launch that started with a room full of people…

Now he’s gonna show you how to rise above your own MLM struggles using the same instant internet techniques. But on the archive of Wood’s original 2009 web bio :: he’s telling a much different {also bullshit} story …

At 19 years of age, I moved to England for 2 years where I did missionary work for The Church of Jesus Christ of Latter Day saints.

I eventually made my way to the MLM, or Network Marketing industry where I initially built an organization doing more than $100,000 per month in global sales in less than six month – selling vitamins.

How he remembers his past is based on what he’s trying to sell you in the present.

An archived post from that same year also paints the “homelessness” story in a whole new {dark} light :: as Wood tells us in The 5 Cardinal Rules Of The New Homeless Rich - How To ‘Stick It’ To Society …

In the past, homelessness was associated with lack, poverty, and sickness, but times have changed.

Simply put, because being homeless is awesome.

So there you have it. The four cardinal rules of the new ‘Homeless Rich.’ I’ll see you at the finest restaurants, swim with you at the most pristine beaches, and laugh as you go back to work, because I live where I am, free.

Life, as they say, is fabulous.

Spoken like a true badass pimple on Tim Ferriss’ ass.

Wood’s grandfather was a university president :: his father was a lawyer and a judge … he’s spoiled and entitled upper crust … and knows shit about struggle. Yet he feels ‘empowered’ enough to equate a 100% voluntary camping trip in Hawaii … with the fucking desperation of actual homelessness.

Give him your money … or you don’t love your family.

The “attraction marketing” that Wood “learned” from the many “gurus” already profiled here :: involves running ads like this early Wood ad for his now defunct MLMGlobalTakeover … 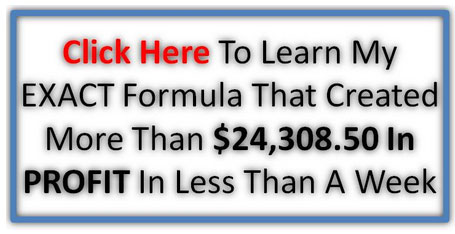 It’s $20 per month to be a part of the Empower Network pyramid selling scheme. Paying that buy-in to the two dumb Daves :: purchases the right to sell five different Empower Network frauducts …

The “Viral Blogging System” – a clunky/ugly skin for the totally amazing {and totally free} WordPress platform :: which will convert most of your website’s on screen real estate into ads for the Empower Network. The VBS is $25 per month … and includes hosting.

Empower Network claims that their $300 per year sites offer SEO advantages for n00bs who don’t have an already established online presence :: being more attractive to search engines than stand alone domains … and so drawing in more {free} organic search traffic. 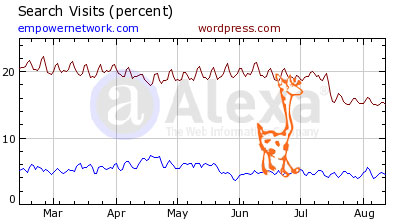 According to Alexa :: Empower Network gets less than 5% of it’s traffic from search. In contrast :: one could host on WordPress.com {for free} … where more than 18% of traffic comes from search. Successful Empower Network affiliates are forced to **buy **their web traffic … a very expensive and dangerous game.

The “Viral Blogging System” is :: literally … worth less than zero. It’s $25 per month to do big damage to your :: slim to none … chances for online success.

The Inner Circle Mastermind – $1200 per year to access audios of David Wood {prolly shirtless} talking about how fucking awesome David Wood is.

Costa Rica Mastermind – $500 for access to videos of David Wood {definitely shirtless} talking about how fucking awesome David Wood is.

15k Formula – $1000 :: for you guessed it … videos about applying the fake ideas of a shirtless dumbass to your own life for fun and profit.

Costa Rica Masters Course – $3500 for access to videos of David Wood telling you the other secrets about his success that he hasn’t already told you for the thousands you’ve already paid him … this time he’s seriously going to go “all in” on telling you though. Or as the Empower Network puts it …

There are over 40 lesson videos in the Masters Course. The level of education that you will get in this product is worth more than a college degree in Marketing.

…Hell, in most cases, it is worth more than a MASTERS degree in marketing.

Even though you’re paying monthly just to be part of the scheme … you can’t earn commissions on frauducts that you haven’t purchased yourself. So if someone in your downline goes “all in” and you’ve only signed up for the $25 per month level :: then screw you wussy … your commissions are going to float up the pyramid to someone who had the balls to be an “all in” badass. And then aren’t you going to be just so sad?

“It’s the best fear of loss psychology that exists in this industry.”

Says David Wood :: like a dumbass predator … in one of his many terrible explanations of the Empower Network pyramid compensation plan.

Should $6000 for a couple hundred hours of video of David Wood {sleevelessly} pretending to be Frank Kern count as “product sales” for the purposes of making an FTC-style pyramid scheme determination?

But it doesn’t matter … because Empower Network’s “100% commission” structure eliminates the need to ask that question. Here’s one affiliate’s attempt to make the comp plan understandable … 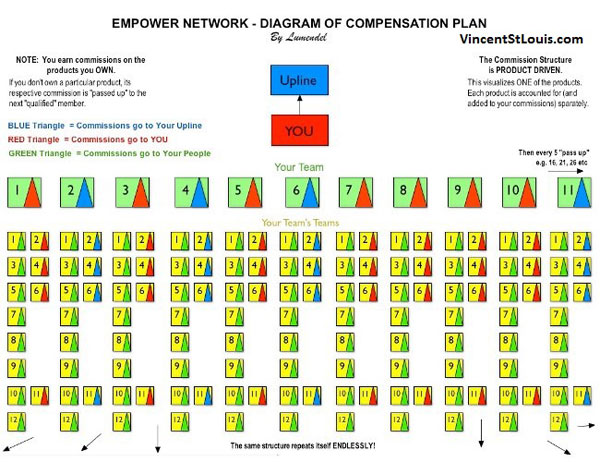 100% of each sale is paid as a commission to the Empower Network affiliate who generated the sale :: but somewhere around 40% of time … the affiliate will have to “pass up” 100% of his 100% commission to his upline. Every 2nd :: 4th :: 6th :: and every 5th thereafter … commission will be passed up the pyramid. This structure runs down infinite levels :: and has the effect of concentrating an overwhelming percentage of the money near the very top of the pyramid … where the two dumbass Daves have positioned themselves. Even in the total fucking ripoff world of MLM … this is a stand out ripoff.

The Empower Network doesn’t sell products :: they give away useless frauducts that are used as the spine for what is basically a cash gifting scheme … and then they sell access to that scheme.

70% of an MLM’s income must come from retail product sales outside of the distributor network. Very few {if any} MLMs can satisfy that standard … but most pay lip service to satisfying it. Not David Wood and the Empower Network though :: says he :: frequently :: and in the video above …

“All of our top earners make more money from pass ups than they do from direct sales.”

Well then :: I guess if The Man ever decides to get its fucking act together and do something about the plague of pyramid schemes ravaging our land … dumbass David Wood is just planning to plead guilty.

If you want a MASTERS in Frank Kern style marketing :: then go get it from Frank Kern … at least he showers.