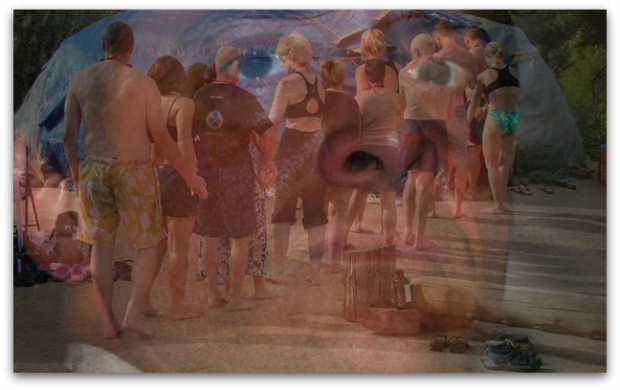 I wanted to go to Yale :: my Mother thought Berkeley :: but my Father wisely insisted that I just skim the book The Secret … and then go see the movie. What else do you need? I mean they just told you the fucking secret … now go forth … prosper!

Maybe you should get some private tutoring from a specialist in Secrets like ironic-friend of the blog David Schirmer. Dave might tell you to fill the hole in your soul by running some scam operations out of evangelical churches. He might tell you that stealing is a quick way to get rich … especially if you don’t pay your employees or your debts. He might say something like :: “Give me everything you have and then hop into this pot so I can make soup from what meat is left on your broken body.” And then you might be like :: “Holy shit, that is fucked. I’m out.”

Many requests this week for The Droid to take a piece out of another “faculty” member over at The University of The Secret :: James Arthur Ray. Last week two people died while attending this d-bag’s $10k per head Spiritual Warrior Seminar. DEAD … DEAD people! $10k per head for a program that won’t do diddly shit for anyone … 60 sad folks stuffed into a sweat lodge like white-people sausages … d-bag narcissist who wears a ring on his thumb and talks about everlasting free instant unicorn wealth. Hell yeah! Count me in!

However :: this is a blog on mission {an active duty mission :: not some pussy ass reserve unit crap}. Justice :: bringing it down on mo-fuckers who need to be STOPPED. I think it’s safe to assume that Mr. Ray has now been stopped. I wish I could say that I’d mentioned his shenanigans BEFORE these terrible harms occurred like my fellow lie fighters Duff McDuffee & Cosmic Connie both did. But once you’re in the New York Times with a body count … I’d say the jig is up … con completed … show over.

Stupid Droid! … STOP being such an idiotic fucking optimist :: will you never learn? {link}

The comments from self-help expert and author James Arthur Ray came during a seminar he held at a hotel in Marina del Rey, near Los Angeles. Ray broke down in tears as he addressed the deaths.

“This is the most difficult time I’ve ever faced,” Ray told the crowd of about 200. “I don’t know how to deal with it really.”

WTF?? He’s doing a seminar? There are dead bodies :: and people in hospitals :: and he’s “dealing with it” by talking about how he can’t “deal with it” to people who paid $1200 per head to hear about how great he is at dealing with shit? Please tell me that didn’t really happen.

“We’re looking for answers,” he said. “I’m as frustrated and confused as other people are.”

“The fact that he showed up says a lot about the man,” Sakurai said.

OMG! I guess Darren Sakurai is willing to forgive and forget. The past is the past. It’s time to move on to brighter tomorrows. We can’t get all bogged down in minuscule details like “dead people” and “reality” if we hope to have perpetual wealth and happiness on a stick.