Emailing with the Enemy 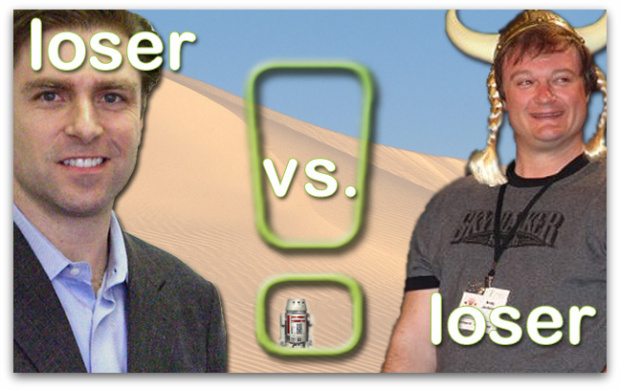 StomperNet co-founder :: and former d-bag in charge :: Andy Jenkins is just dying to speak with The Droid. Maybe he’s not happy about some recent posts :: or maybe he’s just a big fan. I hear I’m HUGE in the “Insecure Narcissist” demographic.

I declined several “opportunities” for phone based girl-talk :: and an email conversation ensued. Here is that entire conversation {unless Andy decides to come back for more}. The Droid would not normally publish an email chain like this :: but Andy deserves it for reasons that you can read about later in my totally kickass tell all book.

Remember as you read that per Brad and Andy :: everything has been going just great and they are best buds. They could not possibly love each other any more without tongues getting involved :: and manziers declasping ::

So, as per my conversation with Karin, someone sent me an email claiming to be you.

Which sorta freaks me out.

Has anyone tried this kind of shit before?

I’d say you should be more worried about real me than any fake mes. And yeah … it’s happened before. Most famously with Kilstein.

So what can I do for you Mr. Jenkins?

First, I’m not worried about the real you (unless you’re just indiscriminately targeting Internet marketers), but I know you’ve got a jones for Brad - and my former association with him isn’t doing me any favors.

Where’s you blast radius on him going?

Second, you’ve got some facts wrong about me, the lawsuit, and who paid the bills. You after the truth? Or trying to stir the pot for stirring sake?

Third, you want a real scumbag of an outfit to go after? I mean a REAL SCUMBAG outfit. I don’t have an axe to grind with this company, but they could use your brand of exposure.

If I have some “facts wrong” please do correct me. I’m a stickler about getting things right … and seeing as how I’m not Ben … I’m not really privy to the inner workings of your organization. Enlighten me.

Of course I want info about SCUMBAG outfits. That doesn’t seem like a question that needs asking.

No, I’m NOT StomperNet. I WAS StomperNet, now I’m Andy Jenkins. You got an issue with what, exactly? Price Point?

You wrote and explicitly said that I used StomperNet money to pay legal bills. You misspoke. I personally paid ALL of the legal bills to sue fallon. I know it makes a real good story - me draining capital to sue brad - it just didn’t happen that way. If you’re a stickler about the facts, correct your blog to reflect that. You got a lot of other stuff RIGHT about Brad.

I’m not privy to the inner workings of StomperNet anymore. You can ask Ben, or ask Brad. If you want to ask me about how it used to be, fix what you wrote in good faith, then lets talk about other evil that you don’t know about yet.

I wasn’t trying to misdirect you with the scumbag question. I’m just not sure what kind of scale you want, cause this outfit is huge, politically connected, and completely evil.

http://www.ripoffreport.com/Search/iworks.aspx (Long load times) http://www.cityweekly.net/utah/article-6061-news-the-$50000-question-utahrss-attorney-general-explains-campaign-donations-received-from-company-his-office-investigated-for-fraud.html (This is of special interest because the Utah Attorney General took a $50,000 contribution from them after investigating them for fraud)

You’re a good writer. Not blowing smoke - you just are. Use that to take down more actual thieves like iWorks.

It’ll take you 20 minutes of looking at public records to reach the conclusion that these people are EVIL. These people HURT other people, on purpose. They STEAL - not metaphorically, actually. They ding credit cards without permission, sell $4,000 coaching packages from boiler room phone centers, and promise to get grant money for a paid up front commission.

oh yeah, since WHEN do real gamers not use a mouse?

Why is it that all you chuckle heads feel the need to justify your schemes to me? What you’re doing is amoral and unethical … fact. You must come to terms with that in order to live with yourself … so don’t pretend otherwise to my face. It leaves me unmoved.

$650 per hour is a scam {not to mention $235 per hour for paralegals … etc}. No doubt about it … and I’ll make no defense of the “Big Law” world. But they prey on large corporations and massive scale capital … hard to get too worked up about that. You’rw going to Paul Hastings … and them taking you on … is just totally ridiculous. They are overpriced by choice .. their stated policy is reduce their total number of clients and only serve the Global top 50. Which ain’t your little shim-sham operation. For your purposes … anyone could have written that complaint … you obviously had no intention of letting it go to trial. Totally foolish ego play hiring such an overpriced firm. I’m glad they took your money.

Karin already passed on your message about my “mistake” regarding where the funds to pay the lawyers came from. I’ve already considered, and disregarded it. I say: “Andy :: being the classless .. tasteless .. d-bag that he is :: actually bragged about his needless wasting of OTHER PEOPLE’S money” …. other peoples money is ambiguous. It matters not to me if you take other peoples money from your corporate account … or from the money in your personal account that came from you corporate account … not your money. If your people haven’t been paid … it’s their money. If your people had been paid … then it’s your victims money. Either way … it ain’t yours.

But now that I know you are sensitive to that part of the tale {and you should be} … I’ll make sure to harp on it … and explain it in greater detail for the minions.

I can’t be manipulated. Maybe you should start worrying.

So I guess Brad and Andy are still getting along GREAT! Sure :: Andy is ready to sell Brad up the river to Enemy Number One :: But other than that everything is just georgia peachy.

Hey “Gurus” :: NewsFlash :: Don’t fuck with me. I’m here to say something :: and I AM GOING TO SAY IT :: all attempts to silence me will backfire. Come at me str8 :: without your usual BS salad :: and say whatever it is you need to say. Otherwise :: expect to walk away with none of your objectives satisfied :: and at least three days worth of impotence {even with your pills}.