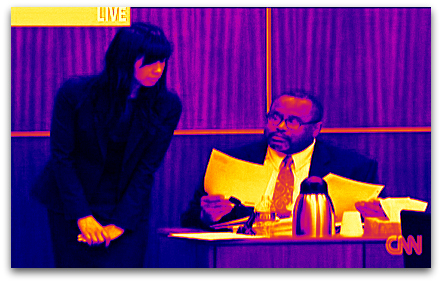 We missed some stuff while I was gone and stuff :: and also you missed me so so much blah blah etc.

But don’t try to hug me … I’m really not into that. You’re all gross and sticky!

During the brief fake robotic hiatus the State called …

Dr. Mosley thinks the victims died from the hellacious heat. But upon further consideration :: he also kinda liked the idea of adding hypercapnia as a contributing factor. That’s pretty much it :: sure it took two full days :: and enough Truc Do to sink a battleship … but that’s pretty much it.

“Whenever I watch Truc Do in action, I find myself wondering how this could possibly be the LA prosecutor with a spotless conviction record, who brought down Phil Spector. She’s insufferable. The sound of her voice actually makes my eyes ache. I don’t even know how that’s possible.”

It’s easy for a prosecutor to have a spotless record because they choose their cases. Don’t wanna lose? Easy :: only bring winners. And the jury doesn’t have to like you when you represent the State :: cause they’re going to respect you by default. And they are going to relate to you as part of the process meant to protect the citizens {including themselves} from harm. So the prosecutor has licence to be an unlikable prick :: so long as they’re sticking it to even more unlikable pricks.

It’s not like that for the defense. Not at all like that. The jury needs to see the virtue in the lawyer that’s not present in the defendant. They need to like the lawyer if they can’t like the defendant. “Asshole defense attorney” is not a winning strategy … it’s no strategy at all … it’s just nuts. Truc Do and Luis Li were NOT READY to handle a case of this magnitude … having “literally” no experience on the defense side … and it shows. OMG does it show.

James Arthur Ray paid big money for these bozos :: and he got scammed!!

The intolerable Ms. Do has been responsible for the cross-examination of all the medical witnesses. And she has made some minimal progress with them :: mainly by boring and confusing them into submission :: and by taking advantage of the fact that scientist types don’t like to state things with “certainty” :: because “certainty” is the province of the ignorant {aka liberal arts majors}. The Truc laboriously re-characterizes lack of certainty as doubt :: and James Arthur Ray goes free … I guess.

And then came Dr. Dickson … 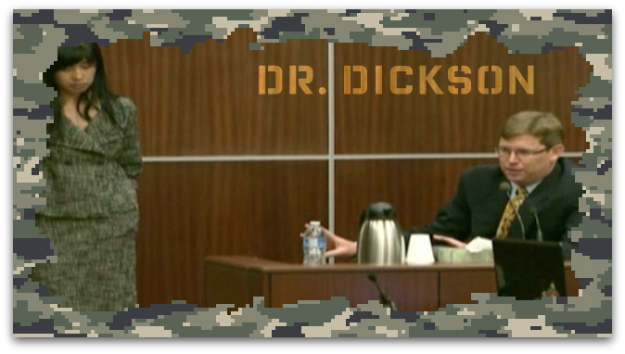 And all Truc’s silly bridges came tumbling down :: some of the shrapnel left wounds … in spite of the urban-camo.

Mr. Hughes walked Dr. Dickson through the complete and total destruction of the defense’s omg-so-stupid theories :: and then the bad part started.

Truc Do tried to play her silly games with Dr. Dickson :: and he declined. In her persistence she made absolutely clear how foolish the entire defense is :: and she allowed Dr. Dickson to repair whatever attrition damage she’d managed to do with the other doctors. It was quite spectacular.

Dr. Dickson testified that he was 99% certain that the victim/folks died from heat stroke. He’s an Arizona ER doc :: so he knows. Dr. Dickson talked past Truc Do and Bill Hughes :: right to the jury … and he just reeked of doctor. People love them some doctor reek.

O-phosphate poisons make people drown in their own crazed spit. People almost never die from it. It only presents in the hospital after industrial level exposure.

The rat poisons used at Angel Valley didn’t contain o-phosphates … nor the ant poisons {that weren’t used until 2010 anyway}.

The victims died from extreme heat. What the defense has purposed via weeks worth of accusational testimonialising and belligerence is impossible :: so says science.

But there’s the whole CO2 thing :: what about that??

Everyone dies of hypercapnia :: says Dr. Dickson. As your body shuts down CO2 builds up {just like it does inside of a faux-sweat-lodge-for-sixty}. Did the people maybe die from hypercapnia? For sure they did says Dickson :: don’t change nothing about the heat stroke though. 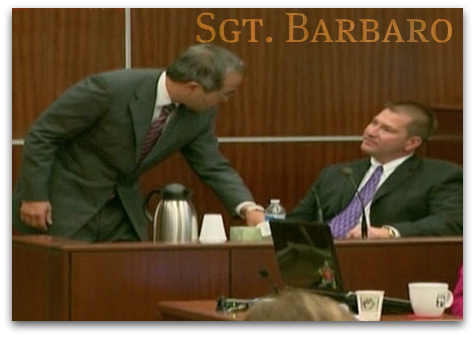 Sgt. Barbaro was the first investigator to arrive on the scene. From the police report …

“I started speaking to some of the subjects that were coherent and found out that they had been in a sweatlodge and several of them became ill. As I was speaking with the subjects some of the “dream team” insisted that I did not speak to the participants but wanted me to speak with Jason, James Ray’s assistant. As I was speaking with some subjects Jason approached me and told me that he could answer my questions. I asked him who was in charge of this event and he told me James Ray. When I asked him where James was he told me that he was up at the main building eating dinner. I thought this was interesting since EMS was airlifting and transporting subjects at this time.”

The Dream Team was borderline obstructing :: and “Jason” {aka Josh Fredrickson} started shadowing the Sergeant like a weirdo until he was told to stand down or face arrest. I guess this wasn’t the first time that bodies hit the floor … so these HarmonicFolks had a plan … a “syntax” if you will. The “People Are Dead Again” syntax.

Golf Cart back to scene.

– Mr. Li fixated on meth labs because crushing the poor with the power of the State was the highlight of his career. #JamesRay #

– Sgt. Barbaro saw a trauma team working on Liz and thought it was CPR … so … #JamesRay is innocent. #

– #JamesRay said he lived in Las Vegas … his ID said something else. Mr. Li says maybe he has another ID or somethings. #

– If “Jason” was actually “Josh” then Sgt. Barbaro is stupid and #JamesRay is not a vicious animal. #

– #JamesRay misrepresented to Sgt. Barbaro how many people were in the lodge. Lying by default … the Samurai way … #

– Maybe Sgt. Barbaro and his couple of decades of experience misunderstood that #JamesRay was blaming Ted like a cowardly bitch. #

– There was “nuts” levels of chaos when the Sgt. arrived on the scene. Many very serious situations … #JamesRay #

– Maybe “Jason” lied about his name instead of you misremembering? Objection overruled. A: Possible. #JamesRay #

– #JamesRay showed up calm and cool and in a track-suit 40 minutes after Sgt. Barbaro arrived on the not-MASH scene. #

– Sgt. Barbaro has seen a lot of really dead people … and yucky scenes … but this situation was still hardcore. #JamesRay #

– #JamesRay admitted to being in charge of everything {cause he’s cool like that} :: just not the dead people part … that was Ted. # 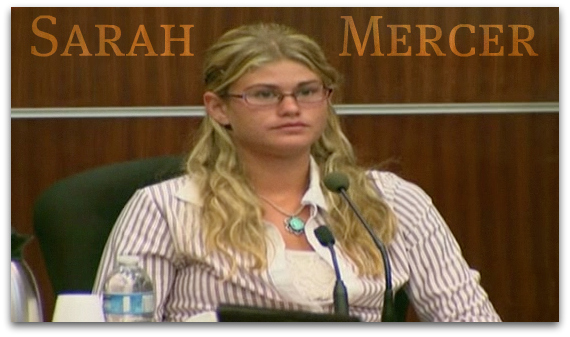 – Oh look it’s a 17-year-old girl who helped save the day while #JamesRay was eating a sandwich. #

– Sarah passed lots and lots of 5 gallon buckets into the death lodge. #JamesRay #

– #JamesRay was telling Sarah what a “beautiful angel she was” and stuff :: and then he spit on Debbie’s hand. #

– “He would encourage people not to leave.” #JamesRay “He’d give them crap about it” if they tried to leave. #

– Sarah says that everyone who exited the lodge needed some kind of help. {except #JamesRay of course} #

– Sarah heard :: “A few people are unconscious”. #JamesRay “said something about that being a good thing” and then there was one more round. #

– Ms. Mercer Jr. remembers the grossness of Lou falling in to the pit. #JamesRay #

– Dennis M. was screaming about dying. Sarah astutely notes that would have been a pretty good time to call an ambulance. #JamesRay #

– Multiple people were talking/screaming about the unconscious “folks” :: #JamesRay no care. #

– Rocks and water came in before the last round even though multiple people were down :: and #JamesRay was on notice of that sad fact. #

– It would be “sacrilegious” to pull up the back of the lodge :: but Sarah and Debbie did it anywayz. #JamesRay #

– Sarah remembers Kirby and James holding hands :: Kirby was face down. Both were blue … #JamesRay #

– Sarah was taking someone {Sidney I think} back to her room even though she wasn’t really conscious. Bowen told her to turn around. #JamesRay #

– Sarah didn’t get the wood sickness that killed so many others. #JamesRay #

– I recommend you tweeps leave @pechilvr to me. Only address a troll as a troll or you’ll make it worse. Right troll? #

– Jury asked judge if they should be listening to the objection grounds cause they can’t hear. A: No. Recess for lunch arguments. #JamesRay #

– Mr. Kelly thinks the 2008 info will be both “cumulative” and “prejudicial” … interesting … and ant poison can kill peoples. #JamesRay #

– Ms. Polk won’t ask Ms. Mercer about 2008 if the jury is instructed about the State not hiding the 2008 stuff since Sarah already mentioned it #

– State has cut Rick Ross and Douglas Soundling for reasons of time :: but reserves the right to call them in rebuttal. #JamesRay #

– Lunch. Note to #JamesRay :: NOW is the appropriate time to eat a sandwich. #

– Mr. Kelly begins his cross of Sarah Mercer. I predict he’s going to be nice. #JamesRay #

– Ms. Mercer only helped out at Angel Valley during #JamesRay’s hellacious events. #

– Your Mom and Dad are murderers … correct? #JamesRay #

– Sarah didn’t watch any news about the #JamesRay disaster :: she tried not to think about it. #

– Sarah confirms Debbie and Fawn’s testimony that they haven’t talked about the specifics of Oct 8th since Oct 8th. #JamesRay #

– Mr. Kelly is drowning in his own flow charts … #JamesRay #

– Too bad that Sara’s “first time on TV” wasn’t actually on TV. #JamesRay #

– Sarah got the hell out of Angel Valley the day after the lodge. #JamesRay #

– My focus was on “how can I help the people in distress” … nice. #JamesRay #

– Q: If the situation was so serious why didn’t Ted and the teenager do something about it? #JamesRay #

– Kelly plays an audio of Sarah saying the blue lips were the first sign of trouble :: Kelly implies other stuff must not be so bad #JamesRay #

– Mr. Kelly wishes Sarah wanted to talk and talk about the worst day of her life :: but no :: she didn’t :: and doesn’t. #JamesRay Recess. #

– I forget what Mr. Kelly is talking about … him too. #JamesRay # 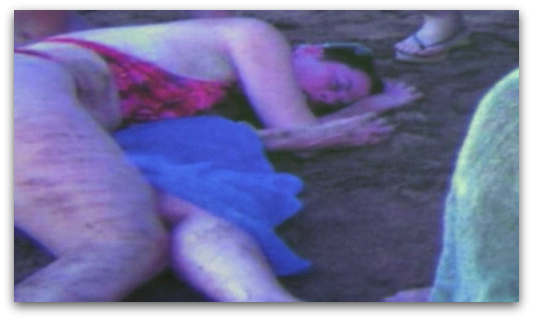 – People died … but otherwise it was super fun … correct? #JamesRay #

– Mr. Kelly pushing Sarah about the civil lawsuits :: as if she cares … strange. #JamesRay #

– Mr. Kelly is done with the teenager. #JamesRay #

– Tending the fire was a full time chore for Ted. But afterward he did CPR while #JamesRay was doing jack shit. #

– Sarah wasn’t making an “official statement” on the scene … she was just giving them a little info …. #JamesRay #

– Ted and Debbie haven’t forced Sarah to talk about it :: Ms. Polk and Mr. Kelly … not so much. #JamesRay #

– Court in recess until May 26th. #JamesRay should offer a plea over the break or he’ll die in prison {like he deserves}. Me Out! #