Sad little man, Kenneth Reno has decided to defend scum-sucking D-BAG Gary McCaffrey across Twitter. If someone speaks out … Krazy Kenny’s ready to defend. He’s a neutral observer of course, and he’s prepared to TESTIFY:

KennethReno: @drkilstein I got over 100 new followers overnight using Gary’s system… so he is not the only one who gets followers.

That BS testimony sounds a lot like the one Krazy Kenny is giving for the Instant Affiliate Generator >>> The “backend” scam that gives D-bag McCaffrey’s Chain Letter a reason for being. 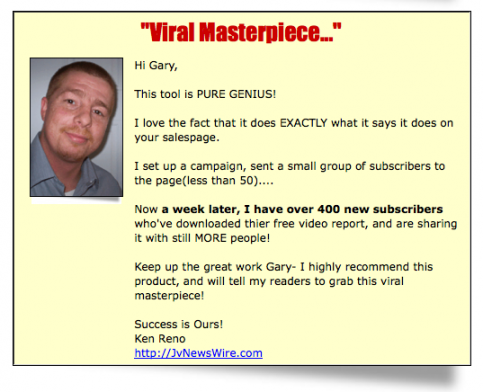 That’s great Ken. Thanks for your “honest” assessment! And I’ll go check out your site JVNewsWire >> sounds fun >> Oops … It’s a fucking FAKE!

Krazy Kenneth Reno doesn’t follow The Salty Droid (and has now blocked me) … but I’m doing damage to his MLM BFF so he thought he better step to me anyway. Fire away Krazy Kenny:

KennethReno: big talk from someone with 180 followers? Waaa Waaa - you sure bitch and moan alot - about what OTHER people are doing

KennethReno: oh I get it, just read your site, and along with stolen images your “thing” is to berate people… good luck in life

KennethReno: your blog title “Free Hate”, (and your link to the HUFFington Post) about sums you up… get a life

A personal attack >> what a SHOCKER! The most common and unoriginal of the scammers “defenses.” Make it about THEM, right Ken? Because that’s a lot easier than crafting an actual defense for a can of cold cat crap.

If that weak-ass-shit is ALL you’ve got … you better leave the insults to The Droid and stick with the things you’re good at, like: