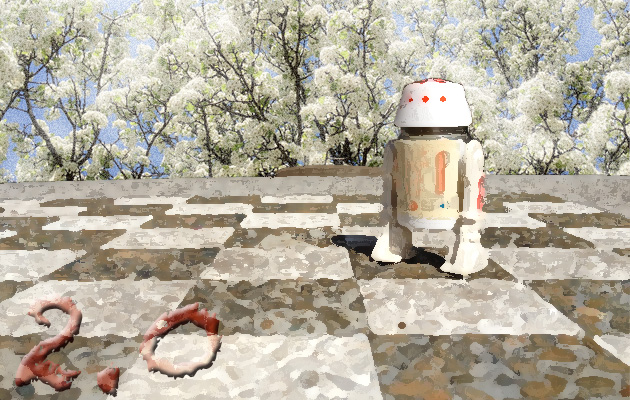 Do u love this blog?

Well then fuck you :: cause this ain’t no blog … and if you really loved it you’d’ve already known that.

That’s not me criticizing blogging :: it’s me being a total dick about blogging … not the same.

I don’t know what word to use to describe this place :: because I don’t think there is one … and I don’t think The Salty Droid represents a class/category of thing. It’s an original experiment in using the web as a platform for guerrilla counter-propaganda … or something. Jason didn’t think it up :: he stumbled upon it … and then I created myself motherfuckers.

A crazy amount of effort :: and tension :: and harrowing drama … is behind each one of the storylines here. Each small story is intended to move the larger story forward in some new way :: it’s not an attempt to build an expansive list of badguys … and I’ve much resisted the temptation to allow it to devolve into a perpetual rag on frauduct after structurally identical frauduct … ad nauseam. It’s a series of parables :: because you people love fucking parables … that’s what Jesus learned me.

It was fun watching this site get popular :: but popular is not going to make anything better for anyone … and this quest has to be about making things better or it will stop being bearable to me.

If your website is getting popular {something that almost never happens} :: then you should add ever-increasing amounts of content and let the web’s network effects propel you to B-list stardumb. Put some ads on your site :: put all the revenue from selling those ads into buying ads … and let your sticky content convert some of those purchased clicks into permanent readers like a website building nuclear chain reaction.

Instead of that plan :: this year’s one year plan for The Salty Droid was all about turning over big chunks of my time to Jason’s more traditional :: old-school-boring :: person-to-person activism … almost none of which can be detailed here. I’ve written less … not more. And he’s worked more … not less. Let’s call it …

… because that sounds inappropriately self-important like Irwin F. Kern has learned me.

It’s not clear to me that Operation Get Serious has been a success. It’s hard to make other people give a shit about shit they don’t give a shit about … and it’s fucking depressing too. The badguys I can understand :: they are a sad fact of life … but the apathy and willful ignorance of the not-badguys is just so disgusting … it seriously drains one’s soul and faith in humanity.

Could be that in our shallow :: celebrity obsessed :: echo chamber of a culture … making this site more popular has a better chance of forcing meaningful change than getting serious. That would certainly be fine by me :: and fine by Jason … who doesn’t want to be a lawyer or an executive or an important person … and who fucking loves writing fucking jokes for the fucking Internet.

But we are both committed to completing Operation Get Serious with a bang :: and so for the next several months this site is going to be back burnered while Jason focuses on three serious projects that I can’t talk about yet … and on one Minion 2.0 project that I can.

Once Minion 2.0 is operational :: and two of the three secret serious projects are completed … The Salty Droid – Year Five … will begin in earnest with a renewed focus on the surprising power of jokes. But until then :: this site is going to be much more like a lame blog … and much less like the epic fucking awesome that has been … and will later be again … The Salty Droid.