Poor Poor Perry Belcher :: Barred by the terms of his probation from participating in False and Misleading Sales :: His life’s passion {along with making other people suffer :: and nude quilting}.

The fine State of Tennessee gave him a second chance that he didn’t deserve :: I hope he honors their graciousness and doesn’t go right back to vicious self serving lies :: That would be a real slap in the face … and you shouldn’t slap people in the face who have the power to drag your fat ass to jail. 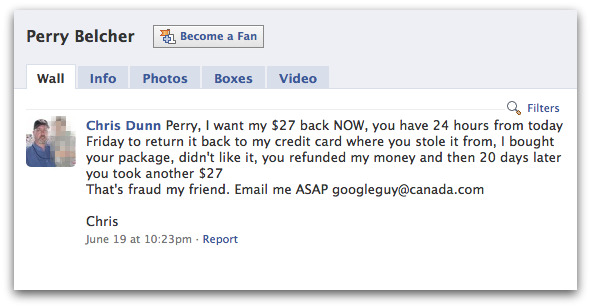 Making claims with specific numbers is stupid dangerous when you are barred from false or misleading sales. Numbers are deliciously falsifiable :: Lie about a number :: And you’ve lied. Math doesn’t leave room for propaganda excuses. Yet :: in his infinite unwisdom :: Perry splashes his frauduct sales materials with numbers ::

“Now you can see exactly how I make more money per email than 99% of the “internet marketers” out there.”

And you know this how? Everyone in the biz sends you their tax returns? That would be helpful as you are required to report them {and** ALL** of their websites} to the government. How nice :: I would have thought they’d be pissed to learn that you were reporting them and their dubious marketing activities to the authorities. I guess “internet marketers” are a close knit and helpful bunch. Inspirational :: {vomiting french onion soup :: and hot dogs}

This email was sent in June :: And that number is to the dollar specific. He says he “made” 94k :: so he references his reportable income … not just his revenue. And it’s attributed specifically to his “Social Media Money System” :: so Twitter and Facebook :: FREE clicks! Not clicks he paid for via expensive {and dangerous} paid advertisements. And not clicks generated by having an extensive affiliate system … or via the dubious cross promotion of other “top” marketers. I offer a heart felt golf clap to Mr. Belcher for keeping specific enough records so as to facilitate the production of such a number. It would require some fancy ass math :: And the claim refers to just “last month” :: So he implies epic genius REAL TIME accounting practices. /golf-clap /standing-o

Either that or he’s lying? You decide :: Occam’s Razor

43k per month just as a {all caps} BYPRODUCT of one of his tactics. Every month :: Impressive. And again :: I nominate Perry Belcher for the Nobel Prize in Specific Accounting.

“52,693 people have expressed interest in this training by opting in for one of my reports/videos… 12,982 of those folks have joined the “Cut In Line” list, and… 16,265 people have registered for tonight’s webinar”

Really? All easy numbers to check. Let’s close our eyes :: click our heals together :: and hope that someone does.