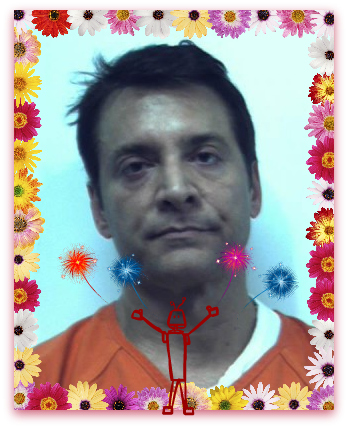 I’m sure by now you’ve all heard about the tragedy :: nay the ignominy :: involving James Arthur Ray. It seems that Mr. Ray :: who only wants to help people grow in spiritual/magickal/quantum ways :: is being treated unconscionably by the tyrants of Arizona.

Oh my god … don’t tell me they scalped him! God damn it Arizona :: how many times do you need to be told? YOU CAN’T SCALP PEOPLE :: it’s fucked up :: even for a western state.

Oh okay :: they didn’t scalp him :: they just set his bail at $5 million. Which means he’ll have to use some of his Harmonic Wealth to pony up the $500,000 bond :: or provide collateral to a bonding agency so that they can pony up. Unconscionable!! Martin Luther King is rolling over in Gandhi’s fucking grave!! Wait :: maybe I overreacted.

I’m sorry :: that was wrong of me. This is not a joking matter. You see guru of wealth James Arthur Ray is not a wealthy man :: so he can’t afford to post this unconscionable bond. Sure his own massive financial success was the underlying assumption of his marketing :: but that’s different. When you’re marketing products at life ruining prices … it’s totally okay to lie. You might not know that … but it’s {un}true. Unfortunately :: in some non-marketing type situations :: like county jail for instance :: claims of wealth are not accepted as a form of currency … and so poor poor Death Ray is stuck in shackles and flip-flops {ha! ha! ha! muh ha! ha! ha!}.

Again :: that was out of line :: and I apologize. Perhaps I’ll just let Brad Brian explain :: to Larry King :: whose agent at the William Morris agency also represented Ray :: and on whose show Ray made several flattering and legitimizing appearances. As we say in the “news” biz :: incest is best.

Mr. Brian suggests that perhaps James Ray’s family could help him scrape together the unconscionable bond money. The Droid thinks that’s a great idea. Brother Ray was an employee of James Ray International :: and was on the bus that took Colleen Conaway to her death :: so I’m sure he’s got a bright future in front of him. And who could forget Father Ray :: ex-preacher and full time asshole :: whose own scams must be bringing in tens of dozens of dollars a year. Hmm … maybe that ain’t such a good plan.

Well :: there is only one thing to be done :: We the People must raise the necessary money to stop this injustice from occurring!! How can we sleep at night knowing that Ray’s massively expensive lawyers :: who are making television appearances for him on both sides of the country :: say he can’t afford to post bond?

When is NOW the right time to do the right thing for James Arthur Ray?