Peeing on the Not Smart

Not-Doctor Harlan Kilstein writing under his {no longer anonymous} pen name :: @THEsaltydroid :: Something tells me he won’t be winning the Man Booker Prize {this year at least}. 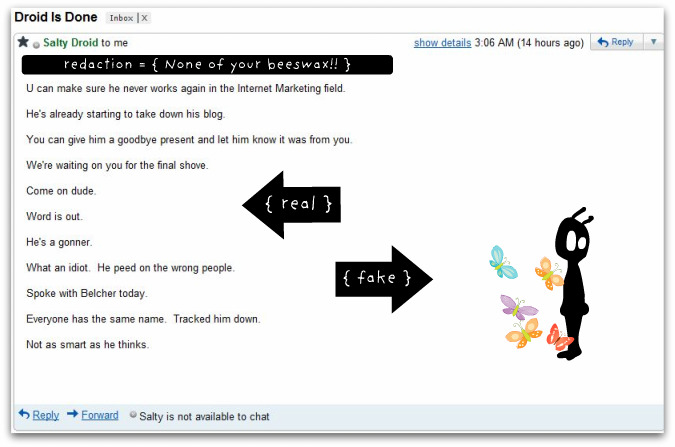 Okay … first of all … this is too easy. STOP making it so fucking easy on me cheese brains.

Not-Doctor Doofus thinks he’s about to get my name :: And more intoxicatingly … a video that proves I’m an Internet Marketing insider “up to no good.” It was such a good ploy because everyone over at IdiotTown is desperate for me to be an Internet Marketer :: Because then I’d be dependent on their LYING ECHOS for my livelihood and they’d have something over me {sorry bitches :: but I’d rather be DEAD}.

He’s already starting to take down his blog.

You can give him a goodbye present and let him know it was from you.

He hilariously refers to a BullShit post I put up as my homepage {link}. And a couple of equally stupid cryptic tweets {1} {2}. Notice that I’m just “starting” to take it down. You know … cause it takes a while to take down a blog … have to get the proper licenses … call the plumber … etc.

STOP saying “dude” Tubby :: You ain’t pullin it off.

What an idiot. He peed on the wrong people.

Yep. I pulled out my wee-wee and went tinkly-winkly all over the floorsy-woorsey. And who exactly are “the right” people to pee on? Come on Harlan … Daddy knows you know grown up words.

Everyone has the same name. Tracked him down

I sincerely hope that Evil Jowls, Not-Doctor Doofus and The Others DID have a little idiot-pow-wow about me. Perhaps Harlan the Non-Magnificen__t told Chubby Cheeks McGee that he’d CRACKED the case. Maybe he told Perry that he already had the video :: and that he was going to END me. If that’s the case … then my tiny little {leprechaun size} exposé of the Not-Doctor was a MASSIVE disappointment to them both.

However, I get a serious {DUBIOUS ALERT} off this cat crap. The Not-Doctor is a tactless name dropper. He brings up the names of people he barely knows conversationally as though he were with them in Vietnam. He was not. Here he is with Frank Kern :: Whose name Harlan mutters at night more often than his Mother’s {which is really saying something} :: 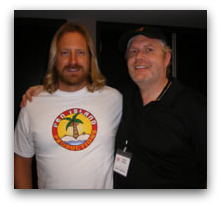 I don’t know Harlan or Frank :: But here’s my {empath robot} read of this picture :: “If your hand lingers on my shoulder for more than ONE SECOND after the camera click … I’m DEFINITELY throwing a RIGHT CROSS … consequences be damned.”

Fact is :: Not-Doctor Kilstein is a PRICK who is merely tolerated {at best}. He thumps his chest incessantly :: But inside he is just a sad little POSER.

Not as smart as he thinks.

I won’t address the accuracy of my self assessment of my own intellectual capabilities :: If one were to incorporate the proper variables for frame of reference, humility, and factoring for the variance in objective self assessment of one’s own humility :: The only possible outcome is a wet willy from Werner Heisenberg. However, I can say with absolute certainty :: I’m a helluva lot smarter than Not-Doctor Doofus thinks I am.