PhotoSpam - Summit on Land and Sea 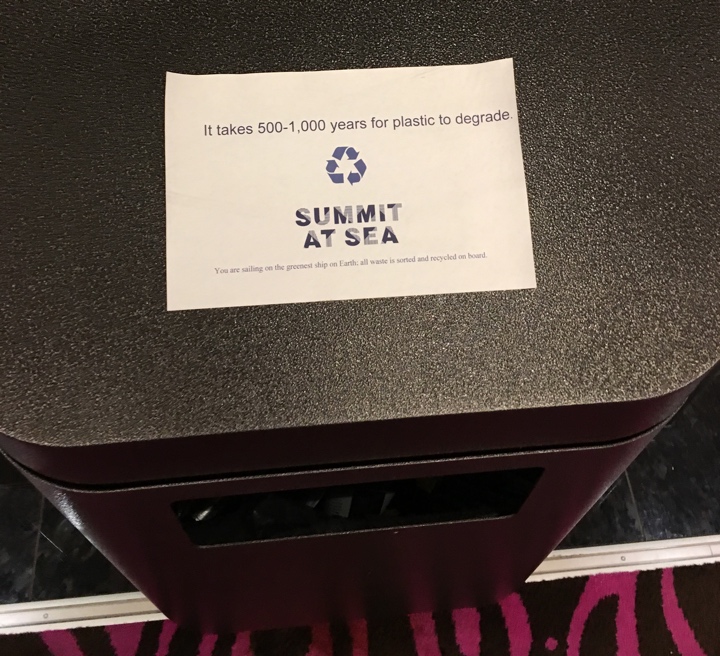 I’m not a full time trash can photographer, it’s just one of my passions. This one basically sums up my experience floating around the Caribbean during the Summit at Sea.

You are sailing on the greenest ship on Earth; all waste is sorted and recycled on board.

Even the trash cans were fake woke…

We’re on a giant floating mall powered by building sized engines. This is one of the least efficient forms of travel, and the form least useful to tourism dependent local communities. But us rich white people shouldn’t have to feel any guilt about throwing away our plastic trash while attending this preposterous party… because a low wage international workforce will be sorting our garbage.

Could the hypocrisy be any richer? Well, maybe consider the fact that many attendees flew from California to Miami to board this “greenest” vessel; that guests were collected from the airport by the longest line of Cadillac Escalades I hope I ever see; and the point of Summit is to build a retreat for rich people by literally carving it into the top of a mountain.

But yeah, let’s all sit down with some high-end bourbon and talk about ecological sustainability.

The mountain retreat is in Utah, and the bros who partied their way to the top of it were recently profiled there by The Guardian.

It began in 2008, when Bisnow, with the boundless confidence of a 23-year-old businessman, cold-called entrepreneurs he admired and invited them on an all-expenses-paid trip to Utah. Bisnow shouldered the cost of the 19-strong gathering on his credit card, then repeated the trick with another get-together in Mexico, racking up $75,000 in debt.

The cruise felt like the same deal, but with a bigger credit card. Like a loss leader. Like the free weekend in Vegas you get for agreeing to hear out the timeshare pitch.

Richard Branson will have a house here, and so will the world’s most powerful marketing executive, Martin Sorrell. The Hollywood producer Stacey Sher and the actor Sophia Bush will be their neighbours, as will Miguel McKelvey, a co-founder of WeWork, and the renowned technology investor and author of The 4-Hour Work Week, Tim Ferriss.

I guess this “borrow money and party” pitch has been effective.

They bristle at the idea that they’re trying to build a high-altitude utopia for plutocrats, but then casually refer to a segment of their clientele as “the billionaire set” – and don’t hesitate to mention that their mountain happens to be located between towns named Eden and Paradise.

Aboard the U.S.S. GreenShip - from a pirate cove themed stage - the Summit founders bristled not and openly described their mountain remodel project as a “capitalist utopia.”

“I have this whole rap with Gertrude Stein, Katharine Graham, De’ Medici, Bauhaus. There’s this rich history of groups coming together, where the whole is more than the sum of the parts, right?” he says. “I think that’s what’s happening here.”

Like others, I had been quietly schooled in the unwritten social rules. Asking someone what they do is considered a faux pas (the socially acceptable alternative is “What is your passion?”). Business cards, I was warned, should not be exchanged in a brazen way.

Summit Utopian 1: So what do you do?

Summit Utopian 2: I’m an internet profiteer… basically a societal parasite. What do you do?

Summit Utopian 1: That’s hilarious because I’m also a parasitic internet profiteer… but my passion is saying, “it’s for the kids.”

Summit Utopian 2: Oh me too, that really resonates with me. I’m absolutely blessed to say, “its for the kids.”

I steer the conversation to the subject of how utterly detached from the real world elites seem to have become. “Elitism, the way I would define it, is obtainable,” he replies. “All that stands between you and being elite is your own investment in yourself.”

Elitism doesn’t have to be about selectivity and exclusion just because that’s what the word “elitism” means.

I tell Rosenthal that I’ve met many people in America who work as hard as him and his friends – harder, in fact – but struggle to make ends meet. He acknowledges that he’s benefited from considerable advantage, but insists we now live in an era in which “the internet is the great equaliser”.

In fact, the internet has click-paved a path to an almost unprecedented period of absolutely outrageous inequality.

“What are you doing to create the utility for yourself? Are you introducing people so they can collaborate?” he says. Struggling Americans, he adds, might want to “host a dinner. Invite 10 strangers. See what happens.”