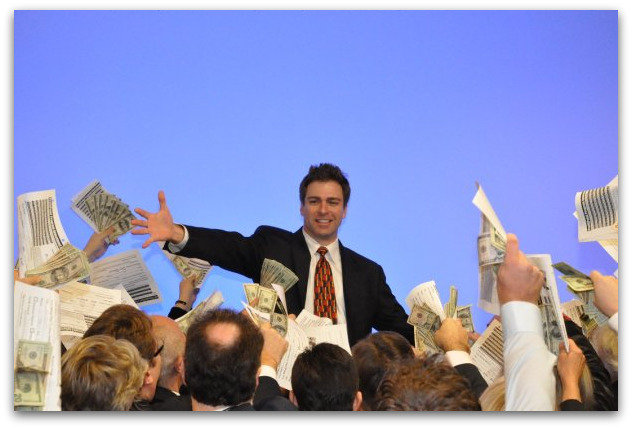 Did you hear that Brad Fallon and Andy Jenkins are mega-fucking-douche-bags? Yep! You did. You’re welcome. And it wasn’t just one or two of you now was it? Oh no … it was fuck near all of you. The hush curtains are coming down … and the shit heads have NO IDEA what to do about it. Rolling on …….. 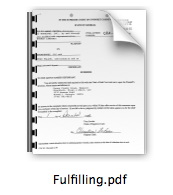 The StomperNet Shit Storm post did indeed produce a shit storm. The comments are crazed {and awesome!} :: you should read them. But there is lots of distracting shenanigans per the usual :: so here is a distillation of the new info that oozed up from the dark black hole that is 2010 SlobberNet … my thanks to the useful commenters {and to all the other peeps who sent me useful shit over the last week}. Let’s figure out what has happened here … and do something about it.

“Yes, StomperNet was Brad’s attempt to cover his self-inflicted losses at MyWeddingFavors.

Yes, the business was operated by his wife while Brad toured the country using it as “proof” of his business acumen. (Brad’s core competency is presenting the fiction that Brad is a good/competent guy, not running a business.)

Kern masterminded the thing from behind the scenes. The SlobberNet twins could not and did not pull this off by themselves. Pre-Launch, they were hopeless boobs and got virtually their original customers by trawling other people’s seminars and signing up people in dark corners…”

Yep! StomperNet belongs to BrAndy on paper … but the reality of the situation is something else entirely.

“What you’re missing -and maybe someone with the evidence will come forward – is that unpaid commissions are just the tip of the iceberg. SlobberNet ERASED THE COOKIES of many of its original affiliates after the first launch, thus stealing who knows how much money from them in the process.”

“Oh, and one other little detail. Drug of choice for this crew? Adderall crushed and snorted. Adderall is a fancy name for four different kinds of amphetamines. Breakfast of champions… if you aspire to be a raging high energy mass of hostility, paranoia and dishonesty.”

Snort snort :: I hear this all the time too.

“During the 999 launch, in the process of making tools available to affiliates, a tool supplier copied affiliates incorrectly in an email resulting in a bunch of affiliates getting the others’ email addresses. Brad hit the roof! Guess they need to get together.”

“As we know, on 4-6-2009 a receiver (Luther Beck Jr.) was appointed by the court to oversee StomperNet finances. Brad and Andy came to an agreement on 7-24-2009 and on 8-11-2009 the receivership was terminated by the court. We know they owed affiliates a boat load of money. The question is, why would be receiver agree to allow an owner to be paid $100,000 and leave the affiliates unpaid?”

“… if the information is so great why did 85% of the original subscribers drop out. You have claimed more than 1800 signed up in 2006 but at time of your 999 launch you had just over 260 and that’s after 2 additional launches over that 3 year period. Hey, with that record you should be paying them big bucks to keep your job!!

Oh, but you are the great marketer who was suppose to get more than 5000 new subscribers during that 999 launch. You did not even get close to half that! And why are people dropping out so fast? It must be because of that great info StomperNet provides.

Oh, I guess it’s those free tools that surprise, surprise, actually cost if you want them to do anything really useful. But that was Brad’s original plan – bring them in at $200 and push them up to $400 or maybe a $1000.”

85% drop out rate :: pretty much says it all. That’s just like growing a business :: only not.

“Oh yes, Brad is wonderful! After StomperNet Live 8 he calls all the faculty to his house and basically fires them all. Oh, they can stay on but without pay and they still have to do faculty office hours and participate in the forum for nothing.

You remember that promise Andy and Brad made to the apprentice members, that is, they would never have to pay again for anything BrAndy did. But Brad, being the great guy he is, decided they have to pay for the new stomper tools. Guess he figured out some way to say they are not really his product.

And then there is the problem of throwing away 3 years of work some of his members had put in building links because Brad decided to just stop paying for the service. He did not even tell the guys in Utah he was dumping them until nearly 4 months after the fact.

Oh Brad puts on a clean public face to his members, but deal with him one on one and you learn how big an asshole he is with his bullying, demeaning emails and text messages.

And don’t think we are stupid. Brad was always a 50% owner in StomperNet and if it went down to the point he had to rescue it, he did allow it to happen.

Also, if Brad is such a wonderful “SEO guru” why did he have to have Dan Thies, Leslie Rohde and Andy Edmonds work on MWF to keep it ranking and producing? With those guys helping, any of us could be SEO gurus.

Why did Brad have to run the 999 launch out of his home kitchen? If StomperNet is such a successful business that’s “here to stay”, why can’t they get a real office.”

God Brad SUCKS!! Even for someone who sucks he sucks.

“Jennifer married Brad in May of 2003. She had her own home and he had a condo that his parents had to sign for due to his credit history. Jennifer had an 8 yr track record with Johnson and Johnson moving up the ladder every year or two and then left on good terms and went into big ticket sales with software in the legal and then healthcare industries. Brad did not have any assets when he married Jennifer. She runs the Aspen Brands as CEO and the key brands are kate Aspen and Baby Aspen and then there are many e-commerce retail sites that are under the overall umbrella…

The lawsuit against Jennifer is bogus and unfortunately she may be paying cash out of pocket to Brad since he has driven every start up he has attempted into the ground while she has continued to focus on her company strengths. But ultimately the asssets will be split in the divorce, not by the lawsuit where Brad claims ownership of the companies after filing bankruptcy post Jennifer starting the company. There is a trial date set for the divorce and the charges were ordered to be dropped against Jennifer in the above case since they will be ultimately handled in the divorce.”

How can Brad Fallon help your company fail today?