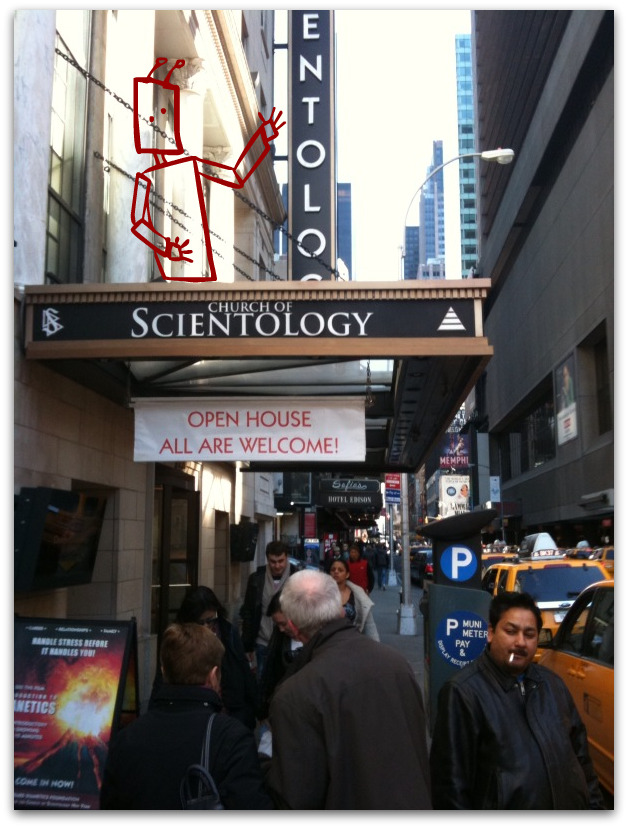 Three days after The Droid’s first post about the Church of Scientology :: The New York Times ran their own {non-hilarious} expose. Is this merely a coincidence :: or was the Gray Lady shamed into action by my robotic bravery? I think we all know the answer. There are NO coincidences :: only the will of Xenu as manifested through vestiges of men.

Speaking of non-coincidences :: The Droid also happened to be in New York City and rolled past the Manhattan home of the glittery thetans. I didn’t have time to be audited into clear :: but I thought it was only fair that I give Mr. Miscavige the opportunity to break some of his toes kicking my metal balls. The super nice girl at the welcome desk said that Mr. Miscavige wasn’t currently available for an interview :: she seemed to think it was a stupid question :: bitch! Don’t judge me!!

No matter :: we’ll just go with a real picture :: and a fake interview.

Salty Droid: Thank you for meeting with me on such short notice.

David Miscavige: I’m not an important person … more of a poser really … so it’s no problem.

SD: I’m so sorry :: I shouldn’t have said “short” notice :: that must be a sensitive issue for you.

DM: Well you know … I don’t like to talk about it unless I’m connected to an e-meter … but it’s hard being a dwarf.

SD: I’ll bet. Is there any chance you could still have a growth spurt? Maybe you’re just a late bloomer.

SD: Indeed :: and you could finish getting your High School diploma while you were at it. It’s never too late for education!

DM: No … it isn’t. I dropped out after the 10th grade. You know that book The Outsiders? It was just so fucking confusing … I couldn’t handle it.

SD: I feel for you little one. Because there is that character in the book called Sodapop :: but he’s not actually a beverage.

DM: Exactly! Finally someone who understands. I mean … either you are a drink or you’re not. You know?

SD: Right :: right. Many people compare your ascension to the top of CO$ to Stalin’s power grab after the death of Lenin :: do you feel like that is a fair characterization?

DM: The who? What? You are one confusing bastard of a robot.

SD: You know :: because Lenin was the idea man. And Stalin was kind of just a massive twat that no one ever liked. He grabbed power by being the biggest douche :: and then he held on to it the same way. Do you think that’s a fair comparison?

DM: Questions can be lies … especially theatrical ones.

SD: Okay :: let’s just move on. Maybe we can come back to that one after you finish High School.

DM: How about I punch you in the throat?

SD: Yeah :: okay :: let’s talk about that. Is it true that you are physically abusive toward members of your “church?”

SD: I don’t think so fuck-o. It’s a consistent story told by many former top members of Sea Org. They tell of you choking :: kicking :: slapping :: and punching members of your staff. It’s pretty ridiculous really.

DM: WHAT! Who said that?

SD: People like Marty Rathbun and Mike Rinder who have been life long Scientologists :: and reached the highest levels of the organization.

DM: Those fucking scoundrels :: I’ll have them over-boarded and locked in a god damn cage. I’ll sell their kidneys on the black market! I’ll poke their nipples with a hot fork!

SD: See :: that’s just the sort of the thing you aren’t supposed to be doing. You can’t just assault people :: it’s a crime. The police could drag your sorry ass to jail for it.

DM: No they couldn’t.

SD: Yep! They could.

DM: Well I’d never poke someone’s nipples with a hot fork. That’s nothing but a god damn lie. Whoever told you that is full of shit.

SD: You told me that you empty headed dwarf :: just now.

{Miscavige grabs himself by the hair :: a big chunk comes out :: it sticks to his hand because it’s been soaked in Aquanet Extra Hold. He uses his now hairy hands to choke himself while beating his head against a nearby filing cabinet. Eventually he collapses in a tiny heap of raging dwarf.}