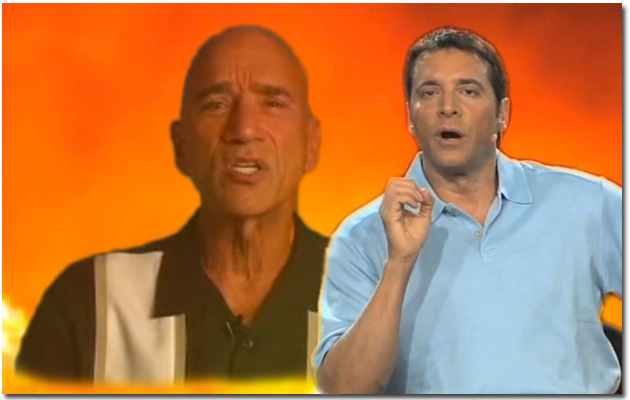 Listen to a free preview of: “Living in the Flow”

“Its time for a new way of living. It’s time to live with more elegance, fulfillment, joy, and true wealth. It’s time to create your perfect plan for a more meaningful and masterful life.”

“It’s time to live in the flow! Your host, James Arthur Ray, is an internationally renowned personal success strategist, visionary, and best selling author. Mentor to over ten million people, and thousands of successful organizations. His methods and mindsets will teach you to live life in the flow, regardless of what comes your way. Now open you spirit, mind, and body and get ready to live an inspired, adventurous, and fulfilling life. Get ready to LIVE IN THE FLOW!”

All this and so much less if you sign up for James Death Ray’s new non-ironic personal development frauduct “for a small monthly membership of only $97 per month… that’s less than $25 per week to accomplish the life you deserve.”

Sold! You had me at hello/elegance. How could a sales pitch with that many adventurous and inspiring renowned personal success adjectives be wrong? And frankly :: I’m sick of living without elegance. It’s been too damn long since the last time I heard someone whisper :: “I love his elegance” :: as I rolled by. I deserve better. I deserve elegance :: and dresses :: and strapless pumps. I deserve to live underneath the flow! {vigorous applause!}

James Ray needs him some mo’ money. His problems keep piling up :: but his income has run as dry as a billy goat’s teets. Time to do some sweet sweet sellin’. The “product” is a fake radio show teaching you how to have a successful life :: JAR style. Example:

Problem: You wish you were famous.

Problem: Your relationship with your spouse is stagnating?

Problem: You don’t have herpes.

But the master of success is unable to bring us this fake radio program all by his lonesome. He needs to partner with Business Broadcasting dot Biz. Why would Ray need to partner with :: and thus pay :: another “company” just to distribute some lame MP3’s over the web when he’s already been doing shit like that for years? Perhaps plentiful multi-thousand dollar refund requests {plus a triple homicide charge} has rendered James Ray unable to process payments. Much success!

You’d think it would be hard for Death Ray to find someone willing to associate their name and business with his manipulation and death schemes :: but you’d be wrong. Cause people suck it :: hard core! Tony Parinello :: prick proprietor of Business Broadcasting :: lives by the used car salesman’s Pyrite Rule: Do unto others whatever you can to render their money unto you. Amen.

Tony :: like James :: is qualified to be part of the self-help/personal development business by virtue of his background in high pressure sales … and his illustrious non-education. He has a series of gimmicky bull crap sales books based around quite possibly the lamest fucking acronym of all time. VITO :: Very Important Top Officer.

Secrets of VITO: Think and Sell Like a CEO

I have not read any of these turds :: but I can tell you from my vast experience mentoring over a million Fortune 100 companies :: the best way to find a “Very Important Top Officer” is to peddle your wares at roadside lemonade stands :: and/or 4th grade clubhouses. Because it’s primarily the 9 - 11 year old business person demographic that is likely to assign such a title. You may also be able to schedule a selling opportunity with the …

Assistant to the Number One Top Person {ANOTP}

Phony Tony tells us more about VITOs on his “squares are the only shape” website :: open up your mind and body holes for The VITO Story …

“I’ve trained the majority of the Fortune 100 sales teams on how to get appointments with and sell to difficult to reach CEOs, Presidents and owners – the people I call VITO (the Very Important Top Officer). I’ve talked to more VITOs, interviewed more VITOs and have taught more salespeople how to get to VITOs than anybody else.

I tell you that, not to impress you, but to impress upon you the point that VITO Selling has been tested extensively in the field. In other words: This stuff works.”

The “majority of Fortune 100 sales teams” huh? Talked to more VITOs than “anybody” else? What impressive lies. If you are going to lie … might as well make them as ridiculous as possible. Very Important Top Officers can’t respect a modest liar :: it shows a lack of initiative.

Tony has been so successful selling to VITOs that he has been able to retire to doing what he really loves :: pushing self-help manipulation scams for low life murdering bastards. Because if you’re not doing what you love with your life :: then you ain’t living in the flow.