Twitter keeps score :: Had you noticed? Something tells me that you had {something = constant fucking chirping about it}.

It’s fun keeping score :: Especially when no one loses. When your sorry ass shows up to Twitter three years into the game :: You need not feel like a chump because a bunch of other stupid hippies already have thousands of followers. Fuck that! You can just immediately start fixating on yourself {Your FAVORITE Thing}. Two followers is better than One. Boom! You declare your whole day a victory. 100 Followers :: Oh Snap! Three figures biaches :: The whole week is a WIN! You can celebrate by not feeling guilty when you break your self-imposed 8 Drink Maximum.

But this Game can be gamed :: And with splendid ease. See, other people {that’s the people that AREN’T you} are also keeping score. If you follow them, a great majority will follow you back. Once you’ve added a point to their score by following :: They aren’t going to let you take it back. If protecting their score means following an idiot, or a whole fucking bus full of idiots, then SO BE IT. 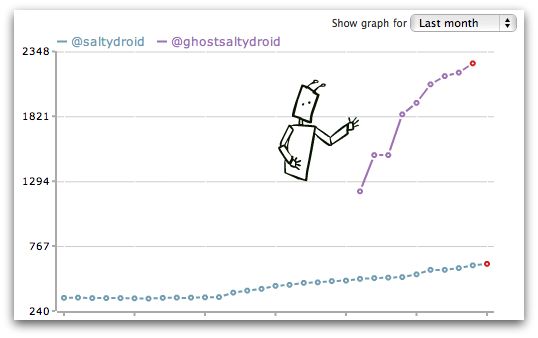 My alter-ego @VapidDroid @GhostSaltyDroid {King of Fools} has amassed 2400 followers in under two weeks. The Ghost is set to autofollow {which is like a pheromone for follow scripts} :: He sends out an auto-DM when followed, “How can i help you make yur realites into dreams?” :: He Tweets nothing but donkey shit and pig vomit :: Pointless ReTweets, Quotes, cut-n-paste from other people’s Festival of Stupid auto-DMs, and some handcrafted original stupid. Here’s a taste ::

If you want 1000’s of followers on Twitter, you DON’T need to buy some Pudgy Predator’s e-book :: You DON’T need an all day seminar with some D-Bag self proclaimed Guru. Just follow tweeps by the thousand :: Unfollow those who don’t follow back :: Then follow more tweeps :: etc etc etc. This is the technique that 100% of the “gurus” are using to amass such huge numbers {even though it’s the one they talk about LEAST frequently}. Or lazier still, pay a hundred bucks for a program or script that will do it all for you. It’s no problem to go from 0 to 20k followers in 1 month while still being a completely worthless idiot.

But if you play the game like this, then your score is in no way reflective of you, or your value to the community. It’s just becomes a measure of group insecurity, and group loneliness. Spoiler Alert :: The group is {at all times} very insecure and lonely.

People who sell “consulting” services at extreme prices by touting their Gamed Twitter Score are just THIEVES, HACKS, and BASTARDS!!

Check out @eunmac’s article on how to spot a follow spammer {here}. The Ghost Droid’s shenanigans nicely fit into the pattern he describes.