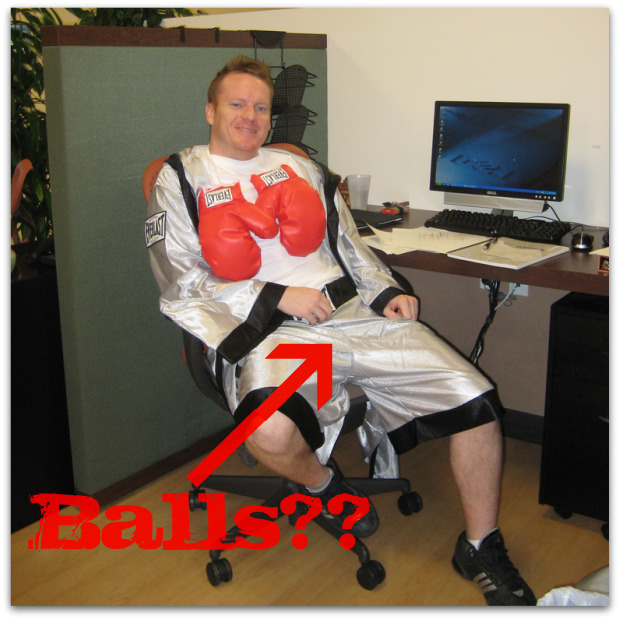 Face to face, out in the heat
Hangin’ tough, stayin’ hungry
They stack the odds ‘til we take to the street
For we kill with the skill to survive

Now I’m pumped! Are you pumped? Greg Hartle is pumped :: he’s the “cream of the fight” :: it’s the kind of warm cream that an old lady drinks to facilitate falling asleep by 8:30 pm. It doesn’t sound very kick ass :: but it is…n’t.

Unlike Megan Fredrickson and her wife Josh :: Greg is not one of Death Ray’s original disciples. He hasn’t been in every Death/Torture Lodge since 2004 {like Megan} :: and unlike J-Fred … Greg may actually have a Y chromosome. The Droid’s intel says that Greg came to JRI in early Fall of 2008. Previously he held the title of VP of Operations at what looks like a sham investment company :: Desert Growth Investments LLC …

“Greg brings a strong background in business and systems development. Most recently, Greg held a management position with a 3.5 billion dollar bank holding company where he oversaw Items Processing at two national locations.”

Okay :: sounds like a wordy way to say he was a bank teller. Color me impressed {with crayons}. But wait! :: there’s more …

Ooo la la. Among others? How many quality control certifications does one d-bag need? It takes lots of time and money to get certified in each of these … and there is nothing in the world more boring. It would be very unusual for a company to train you in more than one process {unless that company was in Bangalore where certification overdose is all the rage}. Added to the fact that these certs have NOTHING to do with making “strategic investments in real estate” :: and the air starts to stink of bullshit.

It also seems that Gregory is fishin’ & kissin’ buddies with our not-friend Jason Moffatt. Moffatt had an interesting post on his blog about attending a James Arthur Ray event. He was none to interested in all the self-help :: fake quantum physics :: mumbo gumbo. But was completely gay about the pressure sales tactics :: a hustler knows a good hustle when he sees one. NoProfit Moffatt also used to brag about being friendly with some JRI insiders. Of course :: once the dead bodies hit the news Moffatt silently purged his web presence of all reference to Death Ray and his evil minions. Because he’s a cowardly bitch who is going to get his … but that’s a story for another day.

So Hartle :: like Josh and Megan :: comes to JRI with a background in the dubious. But unlike the Fredricksons :: Hartle hasn’t been pre LGAT’ed by Death Ray. And what is Greg’s primary responsibility at JRI? Six Sigmaing the LGAT process to ensure a 99.99% upsell rate? Nope. Drum roll please ….. Marketing!

Greg is out for himself :: he’s not under the delusion that a job at JRI is about trying to save the world. He wants to line his own pockets with money that belongs to others :: and he wants to increase his standing inside the world of scammers. He’s NOT brainwashed :: he’s eyes wide open. So on July 25th when he watched Colleen Conaway fall to her death … he should have immediately QUIT to save his own ass instead of pulling out his iPhone and tweeting this insanity …

… and then participating in the dreadful cover up that followed. But he didn’t quit :: a stupid fucking decision that he was likely regretting when tried to escape the Death Lodge during the 5th round :: only to have Daddy call him back inside where he promptly puked his douchey little guts out.

After a long and exhaustive investigation :: the State of Arizona decided to charge James Arthur Ray with three counts of Manslaughter :: the most aggressive charge available. Each charge carries a maximum sentence of 10 years :: but if the State can prove the offense was “aggravated” :: then the sentence is bumped up to 12.5 years.

The list of possible aggravating circumstances is found in the Arizona Revised Statutes § 13-701(D). Prove any two factors on the list “beyond a reasonable doubt” to the “trier of fact” {aka the jury} :: and you’ve got yourself an aggravated felony. On February 16th the County Attorney filed its Allegation of Aggravating Circumstances with the court.

Item 1 – The presence of an accomplice …

Listen to me ladies:

The State intends to PROVE that you were involved. What do you think they are going to do once they are done proving that? Send the info out in their annual Christmas letter? No! They are going to stick it to you for being party to a triple homicide. And if you’ve added to your problems by perjuring yourself in the same jurisdiction where you’ll be tried :: then you are Capital -F- fucked.

Your evil d-bag overlord immediately started moving funds around :: and put a cool $1 Million dollars on deposit with a top notch criminal defense firm. What kind of defense firm can you afford? My guess is that you can’t afford a lawyer at all. Which means you’ll be using a Public Defender :: god bless um :: but with the ridiculous amount of evidence that has piled up … you’ll be forced into taking a plea bargain … and ALL THREE of you will do jail time. You’ll be FELONS :: you will no longer be allowed to vote or participate in civic affairs :: it will be all but impossible to find a job :: and you’ll be stigmatized with the shame of this event for the rest of your pathetic little lives.

Or you can TALK :: right fucking now. My educated robot guess is that if one {or all} of you spill your guts :: tell the investigators EVERYTHING you know :: you might still be spared. Maybe you can recover from this disaster. The County would rather not have this debacle go to trial :: it’s going to be an expensive pain in the ass :: and Arizona {much like Daddy Death Ray} is bankrupt. Each of you knows enough to bury this bastard right now :: to force him and his fancy lawyers to take a plea bargain.

Help the victims :: help the families :: help yourselves.

When is NOW the right time to grow some balls?