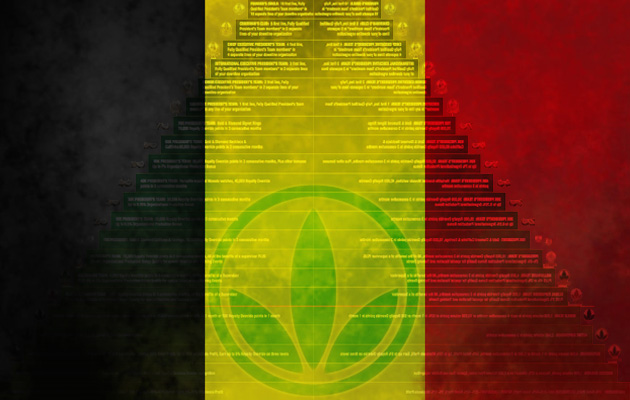 Herbalife is a pyramid scheme :: says the country of Belgium … not me.

I wouldn’t say something as explicit as all that :: because my imaginary lawyers have informed my fake secretary Debbie that I shouldn’t be calling pyramid schemes “pyramid schemes” just because they are obviously pyramid schemes. I should try to use more indefinite :: uplifting :: phraseology. For instance …

Because if I was just to explicitly say …

“Herbalife is the worst pyramid scheme of all fucking time.”

“Herbalife CEO Michael O. Johnson should be arrested :: not sued … such is the blatantness of Herbalife’s obvious pyramid schemery.”

… then that could get me into trouble :: and I could find myself sued by a blatant pyramid scheme with a criminal CEO. Hypothetically speaking :: theoretically … allegedly.

Herbalife is a huge pyramid scheme.

Okay :: that time it was me … I guess I just can’t help myself … but Belgium has been a bad influence on me. I don’t even know why I pay these imaginary lawyers if I’m not going to listen to them.

But anywayz :: did you know that in Belgium they have three official languages … and none of them are English? Did you know that Belgium was a country :: and not some city in Ireland famous for waffles … as many leprechauns have claimed? Three languages :: syrup loving leprechauns … it’s all very confusing for you. That’s why you need me to translate the Belgian court’s opinion :: which was seven years in the making … into Profanity Laced American {PLA} … the official language of the Jersey Shore.

Belgium’s Article 99 prohibits pyramid schemes :: which is a shame for Herbalife … because they are one.

“It is illegal to set up, manage or promote a pyramid system where a company, upon payment, has a chance to receive income from either recruiting new companies in the system or from the sale or the use of products.”

The court notes that entry-level Herbalife victims are forced to buy a $100 business kit :: which qualifies them as a distributor … and entitles them to buy shake mix from their upline at a 25% discount to suggested retail {a 10% premium to the auction price on eBay}. The more product you buy :: the bigger the discount you get. But …

“Most purchases were performed against a discount percentage of 25% and 35%, which shows that Herbalife is getting the biggest part of her profit out of the distributors who don’t make a high monthly [volume] and who most likely resign after less than a year.”

So … most of the money is sucked from the constantly rotating people at the bottom.

Anyone can become a “supervisor” in Herbalife by buying $4000 worth of crap products in a single month. The court seems unamused :: in three languages … that supervisor incentives are tied to buying product … not selling it. Supervisors get a much bigger wholesale discount :: and are compensated in a myriad of ways for the purchases of people below them in the pyramid.

“It is a lot more profitable for a supervisor to sell to a distributor, rather than selling directly to a consumer.”

If they sell to consumers :: they get to keep the difference between their discounted price and the retail price … which may amount to nothing. But if they sell to distributors beneath them in the pyramid :: then they get the price difference … plus a “royalties” commission … plus bonuses … plus the sale counts toward determining their continued position within the pyramid.

Selling to consumers makes no sense inside of this schema :: it’s all about sucking out the people below you … and then recruiting new people to suck out.

Herbalife argues that they require supervisor level distributors to certify that they’ve sold at least 70% of their purchased product to consumers :: but members of a supervisor’s downline count as consumers … so there is still zero incentive to sell to anyone outside of the pyramid.

Herbalife argues incorrectly that they don’t have the burden of proof as to the sales to the end consumer… After all, it is Herbalife which argues in the conclusion that its products “just as with Amway” are sold to end consumers.

Herbalife offered zero proof that people at the bottom of the pyramid :: who are doing the bulk of the buying … ever sell any of the goods on to end consumers. There isn’t even the illusion of a “70% Rule” applying to non-supervisor distributors. We’re just supposed to assume that those sales are happening :: because that’s what HLF corporate is pretending is happening.

The mere claims by a party in their own case do not constitute evidence.

Again :: it’s not complicated … Herbalife could simply prove their retail sales. But they can’t … so they don’t.

Obviously, this is not serious.

… says the court :: pretty much summing up thirty years of Herbalife’s hollow bullshit excuses for their deceptive and destructive enterprise.

This way Herbalife entices people who, due to their economic and social limitations, are easily influenced by ostensible benefits held up by the ‘International Business Opportunity Manual, a Manual to engage in (international) business’ after which they largely quit within a year, as demonstrated by the figures.

They trick poor people with fucking lies :: not about the tastiness or effectiveness of their yucky chemical shakes … but about the “business opportunity” … which is a total scamjob.

In a Businessweek article headlined “Michael Johnson Fights Back” :: HLF addresses the court’s ruling with nothing more than a perfunctory blow off …

A judge in Belgium looked at the system and concluded it was a pyramid scheme. Herbalife says the ruling contained factual errors and is confident it will be reversed.

Factual errors my ass :: they didn’t even defend themselves … because their position is indefensible. That’s how the {allegedly} criminal Mr. Johnson regularly “fights back” :: conclusory statements … backed with neither facts nor specifics.

But Herbalife {and MLM more generally} is an American problem :: an American export … and it needs an American solution. India recently arrested Amway’s top d-bag in their region … and that’s the only right idea. Anything short of jail time for pyramid scheming fuckheads like Michael O. Johnson :: is a fail … which will allow this heartless people grinding machine to churn on unabated.