Killing people by convincing them that they should stuff themselves into a hotbox with a hundred other sweaty sheeple :: then convincing them to stay in that hotbox until long after it’s obvious that people are dying … that’s very interesting.

The nutz ballz human drama of it all :: the “suck on this Jim Jones” brazenness of the manipulation … it’s too interesting to be not noticed.

Even in Scamworld :: where all sins are immediately forgiven {because there are no sins} … one wonders if one’s branded scamming operations can ever fully recover from the committing of such an outstandingly epic crime.

At one time James Arthur Ray was half filling mid-size beige ballrooms with his blinded-by-Oprah acolytes :: but in an upcoming CNN documentary … the pathetic fallen demon is shown desperately grinding his way to single digit frauduct sales.

Not fucking justice by any stretch … but some semi-satisfying schadenfreude. 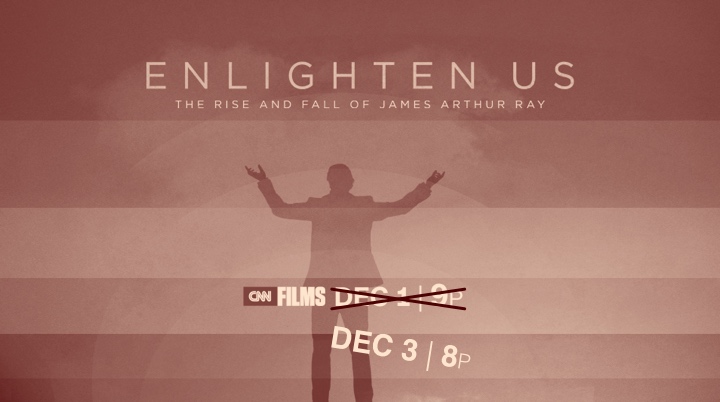 Ray’s standard {non-murdering} schtick is just an off the shelf version of the usual derivative guru yuck yuck :: as plentiful in America as affordable socks … and just about as interesting.

In spite of all the horror and mass casualty caused by scaled scamming :: the day to day details of the “industry” are too complicated and convoluted to be interesting … so you can literally get away with it for a lifetime. Just ask James Ray’s old-as-dirt mentor-in-scam Bob Proctor {tell him the SaltyDroid sent ya and you’ll get 50% off your next unicorn pony hybrid}.

Bob Proctor has been in the scam biz for as long as birds have had wings :: hopping from one grift to the next like a sexual disease at a Christian youth camp … but no one gives a single hot shit about it.

Proctor supported and nurtured Vemma along its sharp rising path to becoming a $250 million per year scam operation. He profited richly from the speaking fees etc … and his wife was placed atop of a large Vemma downline.

But the Vemma collapse won’t hurt Proctor in his next big scam thing … just like it won’t hurt any of the other top people. It’s all just personal progress on the path of learning and growing and building a better tomorrow for the vibrations of changing the world :: blah blah blah green tea infinity … will that be cash or credit?

Watch as Alonso Alonso throws away all the Vemma he stockpiled while pursuing the scheme.

Why should you follow Alonso Alonso into his next MLM?

Because last time he led you into a pyramid scheme … and now he’s learned important lessons about pyramid schemes that you can’t learn anywhere else.

Failure as a feature.

Enlighten Us finds James Arthur Ray getting out of jail fully expecting the instant no stings attached comeback so commonplace in the white collar criminal underworld. But it seems a fridge full of dead bodies scares away potential prospects in a way that a fridge full of stockpiled Vemma never could.

Enlighten Us premiered this April at the Tribeca Film Festival. Jason attended the premiere and subsequently submitted two full reviews {written in his own voice} for publication to this site … both of which were summarily shit canned by me for being terrible. Here’s a taste from one of them …

I’m standing outside a cineplex at the Tribeca Film Festival waiting to see a made for TV movie. It’s the premiere of, Enlighten Us: The Rise and Fall of James Arthur Ray, a story about which I have already written a hundred stories.

It’s a nice night, New York loves me. I’m with my wife and sister, and we’re all three hoping James Ray doesn’t use his fake god powers to make it rain.

Someone asks us what film we’re going to see, and hands us a pamphlet. I know without looking that it’s Virginia Brown. Ginny’s daughter Kirby died under the thrall of James Arthur Ray, and our lives have been intertwined ever since. But we’ve never met in real life, and as I wasn’t braced for it, it was a little too emotional for me.

This thing, The Salty Droid, is all about computer screens. I observe and capture the world as seen on my screens, and then I interact with that world via a half-crazed half-fictional character. The layers of abstraction help to keep my brain safe while I’m inhabiting one dark mire after the next; I try to crossover as rarely as possible. This is the first article I’ve ever published as myself.

Ginny and George are out trying to raise awareness for SEEK Safely. They feel like they’ve been completely shutout by the film makers. They’ve not been represented on camera, and their input has not been sought off camera. They haven’t even been invited to attend the premiere. They are visibly upset, and that makes me upset.

“No one fucking cares about you or your squishy little nerd feelings” :: says me … to me … tough love.

Yet for all his instagram bragging and New York hotel room tweeting … Ray wasn’t in the small theatre where the film was screening. Too bad :: because he missed the audience’s overwhelmingly negative reaction to him :: which manifested via audible groans :: and again during the Q&A with director Jenny Carchman.

Someone in my party asked about the glaring exclusion of the victims’ families. Ms. Carchman’s answer was a version of what she told Matt Stroud for The Verge …

CNN has once again given James Ray a platform from which to spew his propaganda … uninterrupted by sanity or skepticism. His distortions and prevarications go continuously unchallenged.

Despite its whimsical title, the film examines Ray through a surprisingly credulous lens, making him seem almost as much a casualty of “shit happens” as a convicted criminal. Viewers hear Ray’s explanations of how personal growth always entails risk; they are shown his desolation at having watched his thriving $10 million business go up in literal smoke.

And yet … somehow Ray still comes off as a horrible disgusting monster. His detachment from reality is like some high grade surrealist performance piece.

Which is why :: at least as evocative art … I think this movie a haunting success.

I came out of prison in debt. My credit is crap. I’ve got nothing tucked away.

I’d like to begin a conversation with you here today… it’s about the topic of wealth, abundance, and prosperity.

For whatever flaws I may find in the funding :: filming :: and promotion of this film … Jenny Carchman got James Arthur Ray to look into the camera and say …

It had to happen. Because it was the only way I could experience, and learn and grow…

Kirby :: James :: Liz :: and Colleen … all had to die so that James Arthur Ray could become an ex-con conman :: pitching himself as a specialist in comebacks … while perpetually waiting for his own comeback to come.