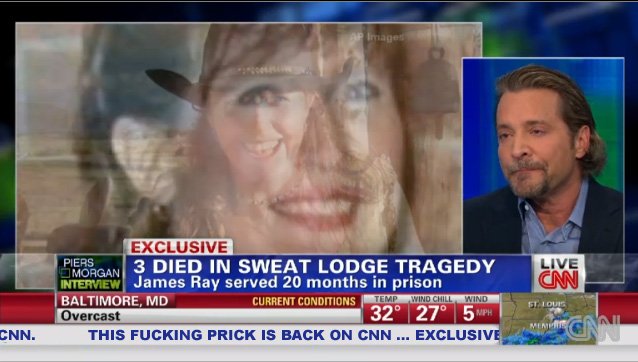 At least four dead people later … James Arthur Ray is back on CNN.

And he’s :: like … all sorry and stuff. How else is one to interpret the dye and highlight job?

It’s the greatest pain I can imagine, is to really care about helping people — and end up seeing them getting hurt.

… says Captain Pity Party :: in various lame {and ungrammatical} ways throughout the hour long interview. He’s sorry :: about his own pain and suffering … can’t that just be enough for all these whining whiners with their dead relatives?

You might think you’re watching a terrible interview between an ego maniac :: and a fake-teary-eyed ego maniac … and you are. But it’s much more impossibly bad than that.

Pretend journalist :: and full-on poser :: Piers Morgan mentioned {several times} Oprah’s pre-homicide role in touting up the unqualified and completely fraudulent James Arthur Ray :: but natch Morgan never felt obligated to mention his own network’s critical role in the hyping of Ray … or his own continued direct connection to the man monster the media made.

Poser journalist Piers Morgan is managed by John Ferriter :: a person already tagged on this site … so that can’t be good.

This January, Piers Morgan will take over from Larry King as CNN’s prime time interviewer with his new program, Piers Morgan Tonight. It is a remarkable coronation for Morgan, a talent show judge and former tabloid newspaper editor, whose old boss Rupert Murdoch once said of him, “His balls are bigger than his brains.”

It may be an even sweeter victory for John Ferriter, Morgan’s manager and the man responsible for the CNN deal.

… The Daily Beast told us in a 2010 profile of Ferriter :: The Man Behind Piers Morgan.

When Morgan learned of his agent’s dismissal via a gossip site online, he immediately called to pledge his allegiance. “If this is your Jerry Maguire moment,” Morgan declared with typical understatement, “then I am your Rod Tidwell.”

Ferriter specializes in the fakest of all fake fucking things :: reality television …

Ferriter said the first step in realizing the potential of Brand Morgan was to raise his profile in the U.S. “You need to get America to embrace you,” he told the 45-year-old Brit, urging him to appear on Donald Trump’s show Celebrity Apprentice.” Piers sent me this long email … The pros, the cons. I sent him one back saying: ‘Do it.’

Sounds great … do it. I mean :: CNN wouldn’t want to hire a newsman who was actually a fucking newsman to talk about the news … that would create all sorts of ethical issues {in that it’s an issue for anyone to have any sort of ethics}. Just hire a couple graduates of Trump University … and call it good.

The Man Behind Piers Morgan :: is also the man behind James Arthur Ray’s new contact page … cause James and John go way back. 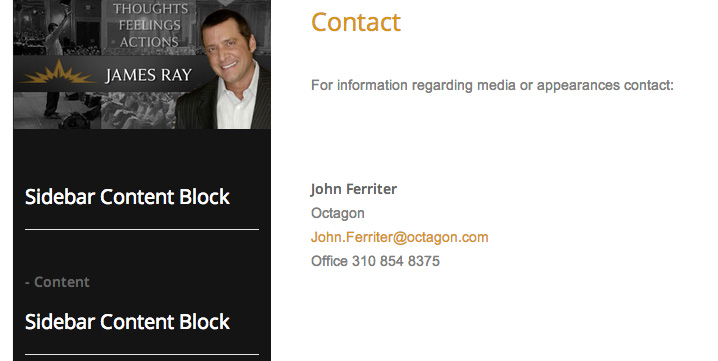 Two years ago John Ferriter :: The Man Behind Piers Morgan … wrote a letter to the court in Ray’s criminal case seeking leniency.

I have known James for a number of years having met him through my former client Larry King and his producer Wendy Walker. I’ve had the opportunity to work with James on a number of projects and have grown to be able to call him a very good friend.

I know that what happened in Sedona was an awful tragedy. I also know that as the families have suffered and have started their grieving process, James too is grieving for the loss. I have seen the anguish in his face and have spoken to him about the tragic loss on numerous occasions.

He knows it’s awful for the families and everything :: but what they need to understand is that there’s this whole “show me the money” situation …

James has lost everything that he spent a lifetime working to earn. He also served a month in Jail in Arizona last year. It is time for everyone to start the healing process and allow James a chance to rebuild his life. Remanding him to prison will not help anyone heal and won’t bring back the people who tragically lost their lives in this accident.

Ray “lost” nothing. The couple million dollars of other people’s money that he had accumulated via fraud and manipulation :: was used to purchase the multi-year services of Rhonda Byrne’s fancy attorneys at Munger Tolles & Olson. Though it seems the ridiculous Ray :: quite hilariously … remains furious with those lawyers for allowing him {The God of All Things} to be convicted for something as petty as killing some of the little people.

I’ve given MTO attorney Luis Li an endless ration of shit over the years {because that is how I fucking roll} :: but the truth is this … brace yourselves for this damning admission … he won. His twelve month marathon of obstructionism got his guilty as shit client off on the lesser charge. The actual “defense” of Ray lasted only a couple of hours :: and a couple of witnesses … there was really nothing of substance you could say in Ray’s defense. Anything less than that multi-million dollar obstruct-a-thon :: and James Arthur Ray would have died in an Arizona prison … so that’s other people’s money well spent.

To my knowledge :: Ray has himself not paid a single penny in damages to any of the victims or their families … with all settlements to date being paid out by insurance companies. All the money James Arthur Ray took from his victims … was spent in the service of servicing James Arthur Ray … so yeah … HE LOST FUCKING NOTHING!

Three people dead :: James Ray convicted by a jury who only heard a tiny amount of the publicly available evidence :: the discovery of Colleen Conaway’s covered-up death at a Ray seminar three months prior to Sedona … and yet The Man Behind Piers Morgan argued for a sentence of no sentence whatsoever.

As a tax paying U.S. citizen and a supporter of our legal system, I would ask that you allow James to return home so that we can all start healing and give him the opportunity to start a new.

John Ferriter basically got his way :: as tends to happen with rich white people … and Death Ray served only a tiny fraction of the time that even weaksauce justice would demand. And now here he is :: back on TV … “starting a new” [sic] by once again pretending to be real inside John Ferriter’s world of faked up reality.

I’ve been hearing about this “interview” :: /slash “starting a new” [sic] promotional opportunity … for a couple months now. I’ve also been hearing :: via my ubiquitous robot gossip sensors … that Ray thinks he’s getting his own television show. I was hoping that things weren’t actually that dark out there :: that Ray was just exhibiting some classic The Law of Attraction delusionalism … but here it is happening.