Internet Marketer :: and top Herbalife distributor :: Shawn Dahl … has a real thing for his mother-in-law {pictured above left}. Well :: maybe not her so much … as her scamtacular business ideas. Before Dahl met his mastermind mother-in-law :: his best scamming idea involved becoming a middling real estate agent in the Siberian province of Vancouver.

In the year of our Lord two thousand and something-ish :: Shawn Dahl met Nicole’s mommy Deborah J. Stoltz … and everything changed. 4 Shawn and Nicole anywayz :: but stuff for everyone else stayed pretty much the same … fucking lame and shitty. 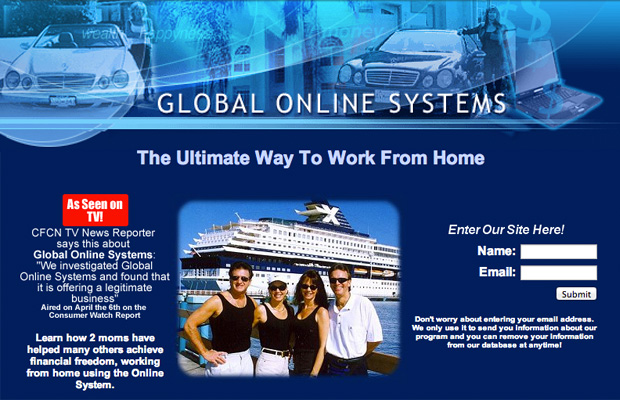 Learn how 2 moms have helped many others achieve financial freedom, working from home using the Online System.

It so simple :: a monkey could do it … not even a super smart orangutan type monkey either … just any old dumb-ass monkey with a laptop will soon enough be driving a fucking Benz and splashing around mad cash for all the fanciest of macaroons!

Global Online Systems was actually a system for adding {large and unjustified} costs to the humiliating process of failing at Herblife’s fake business opportunity. But that wouldn’t be a convenient fact to disclose for a couple of moms trying to sell them some Global Online Systems :: now would it?

“Our system is so simple that even if you are an Internet beginner, you can capitalize on our turnkey system.”

That middle testimoanial from the shirtless man :: is our loving son-in-law Shawn Dahl … but that wouldn’t be a convenient factoid to disclose either I guess.

My first month now working full time totally from home with this system has netted me a profit of over $8,300. The growth in such a short period of time has been incredible and I am looking forward to a bright future as I take this business even higher. My dream of residual income is happening!

… says 2003 Shawn :: all aglow in the light of his residual dreams come true.

But the dream was a lie :: and the glow must have been from stripmall tanning beds … because in November 2004 Debbie Stoltz pled guilty to pyramid scheming and signed a ten year prohibition order with Her Majesty the Queen of Canada.

Global Online Systems was dead :: but in the month prior to that death being made official … Online Business Systems had been quietly born. It was like a little miracle :: a yin and yang sort of a thing. One scam dies :: and another {exactly the same scam} is born … but this time with the word “business” in the “business” name … and with Shawn Dahl {mostly} wearing his shirt.

Why did we leave Global Online Systems?

A team of leaders wanted to develop enhanced automated marketing tools to improve our system while decreasing the cost of running our businesses.

Sure thing :: I guess you can’t keep a “team of leaders” down when they get the spur to innovate.

One of the greatest changes we’ve made within our new Online Business System is the superior quality of our Decision Package. Our Decision Package includes an information booklet, a DVD, an audio CD and a Video.

This ain’t your mother-in-law’s Decision Package :: this one’s got a DVD.

Do I have to tell people that I mailed a Global Online Decision Package to that we have “changed systems?”

Just let people know that we have updated our system and we have made some exciting new changes – they don’t need to know and it makes no difference. In essence, we are not changing systems; we are simply building upon the experience of our Leadership Team – we’re just using different marketing tools now.

Turns out {barely} different name :: plus millions and millions of dollars in blood money … was good enough to sign many of radio’s top d-bag personalities as official shills.

Glenn Beck did his own voice over work :: published posts … and ran constant banner ads.

Rush Limbaugh :: Sean Hannity :: and a long ass list of deplorable sell-out motherfuckers … battered their millions of collective listeners daily with messages about the total legitness of spending thousands of dollars for a chance to sell Herbalife via Shawn Dahl’s Online Business Systems.

Online Business Systems let you pay Shawn Dahl and his “Leadership Team” for almost every aspect of failing at Herbalife.

Victims buy leads from OBS at ridiculous prices :: they buy Decision Packs from OBS to send to those leads … and then they try to close those leads into Dahl’s Herbalife downline using scripts and pre-canned marketing materials that focus on pitching the business opportunity unicorn. 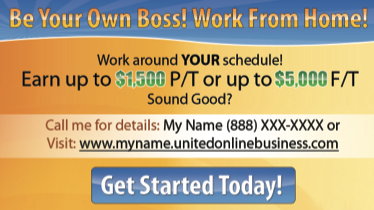 They buy OBS websites :: and training seminars … and they pay a monthly fee for the right to get fucking jacked on all these other fees.

Deborah Jane Stoltz had some pretty damn good scamin’ ideaz :: thinks me … and I’m a bit of an expert on such things so it’s a real {backhanded} compliment.

This barrage of unicornian marketing was successful :: and Shawn Dahl became one of Herbalife’s leading soul sucking parasites … reaching the very top rungs of the pyramid.

… Income At Home, Herbalife, and the $8 billion pyramid …

In spite of the beautiful-person-stockphoto-giant-smiling evidence to the contrary :: it’s really a horrible and depressing situation … with lots of blame and shame to go around.

Herbalife’s corporate honchos :: currently experiencing out of the ordinary levels of scrutiny … have been trying to distance the company from the various dodgy biz opps that are necessarily stacked on top of their own dodgy biz opp … by nearly all of their top producers. Herbalife Vice President Julian Cacchioli went so far as to tell The Verge that only 1% of their sales come from distributors utilizing such systems :: which is just stupid … and is most definitely an outright fucking lie. 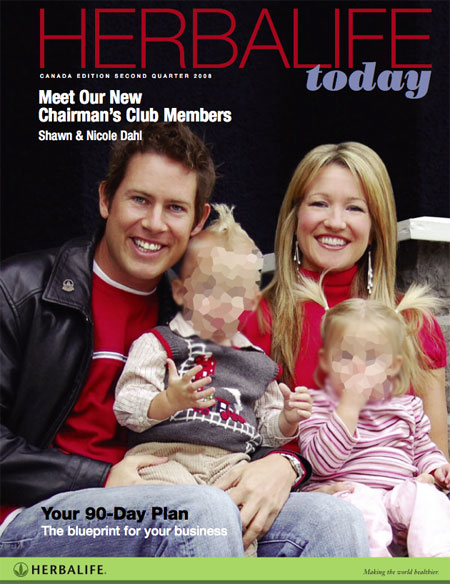 Cacchioli also relayed Shawn Dahl’s claim that he :: Shawn Dahl :: has nothing to do with Shawn Dahl or Shawn Dahl’s Online Business Systems … an even stupider fucking lie.

The audio for this original SaltyDroid cinema production comes from an Online Business System training/recruiting call :: and has Herbalife CEO Michael Johnson participating directly in the scam. Johnson :: one of America’s highest paid CEOs :: knows EXACTLY what Shawn Dahl is up to :: because here he is … fucking helping him get up to it.

It’s hard to wash the dirt off of hands made of mud.