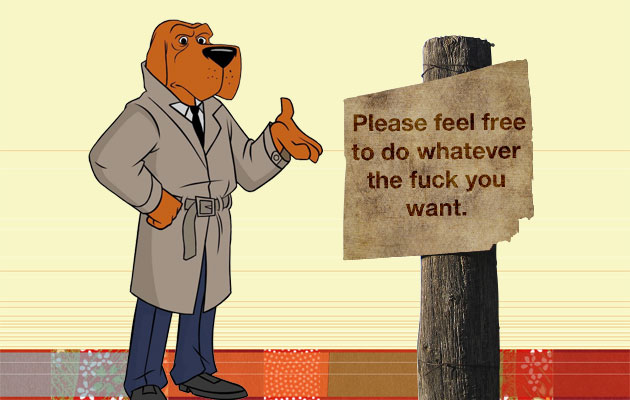 Congress passed 15 USC § 6102 to tell the FTC to do something about people being buttholes over the phone :: this was back in the Nineties when Congress still did stuffs without needing to be tazed. It’s the FTC’s job to make the actual rules :: which they do after a prescribed period for public comment where interested parties who have enough money to hire lobbyists … like the Direct Marketing Association … can help “contribute” to the rule making process with their own insightful insightfulness.

If you act now you can get a free copy of these exciting rules :: then you can print them out and carry them around with you whenever you’re touring boiler rooms :: like Vicious Garden Gnome Mike Filsaime was said to do several times at John Paul Raygoza’s PushTraffic before it imploded.

It is an abusive telemarketing act or practice and a violation of this Rule for a telemarketer in an outbound telephone call or internal or external upsell to induce the purchase of goods or services to fail to disclose truthfully, promptly, and in a clear and conspicuous manner to the person receiving the call, the following information:

However :: like most of the salesman on the PushTraffic floor :: Robert Artino doesn’t give a shit about the law and starts off his sales calls by lying about his identity …

… Steven Marks {Artino} has already violated the disclosure rules and set up the whole transaction as fraudulent :: and it only took him ten seconds … well played.

Fuck disclosing that it’s a sales call :: that severely decreases your chances of making a sale. Artino starts right in the on unicorn dreams :: the ridiculous $15K a week income claims :: and the probing for personal information …

Don had a low paying job before getting laid off :: he’s been unemployed for almost a year :: he’s in his forties but might live with his parents :: he doesn’t sound all there to the fake robot … or to Artino. His desperation is obvious :: but everything Artino says to him is a blatant lie … and he’s totally sold after just a few minutes.

Of course :: you gots to spend money to make money …

… “can you borrow money from your mom or anything like that?”

That sort of shit ruins families :: families that are a desperate man’s final fallback position … but the heartless bastards at PushTraffic said stuff like this all the time. Don was sure his Mom would have none of this bullshit :: but Artino had a better idea anywayz …

Facilitating your own felony fraud by encouraging your victims to commit felony fraud of their own :: super cool … super fucking cool. Don wasn’t sure this was a good idea :: won’t the credit card company expect payments to be made on the money borrowed? No problem :: Artino has a lie for every occasion …

First paycheck within a week. Within a month :: before your first credit card payment comes due … you’ll have made your money back. That’s not what they told some customers :: that’s what they told ALL customers … it was part of their scripted pitch.

It took nine minutes and twenty one seconds :: but the misery and regret might last a lifetime … a lifetime shortened by misery and regret. All fraud :: start to finish. All day :: every day :: day after day :: month after month :: year after year … thousands of poor people taken for millions of dollars.

If this ain’t crime :: if NOTHING is going to be done … then why keep pretending like we have laws and rules?

As long as you’re hurting poor people :: there aren’t any rules … please feel free to do whatever the fuck you want.