Response 1 :: HEY! STFU you fat tub of lardy hypocrisy :: You DON’T get to quote our Epic Heroes. NO WAY! You should be stricken with Hand & Ball Leprosy immediately for even having the audacity to type out that name. Sidling your scummy ass up to people of legendary strength and character in order to sell your scammy Frau-ducts™ :: It thoroughly disgusts.

Response 2 :: Wait a second … is that even a Churchill quote? Sounds pretty trite for The Last Lion. If Winston was responsible for creating his own universe :: Then he did a super shitty job. Few men have ever been better positioned to see what slaves all men are to fate and circumstance :: How inconsequential even the largest among us is in the face of the ever stampeding HERD. It seems to this Droid that Mr. Churchill would have been loathe to credit himself with “creating” the Blackest moments in the history of the known Universe.

I better Query my {15% Sentient} girlfriend Google about this :: {Search}

Well now, what a non-shocker … Evil Jowls didn’t come across that quote while drinking tea and reading a Churchill biography … it’s just GARBAGE from The Secret. He probably didn’t even read that :: It was too easy to just wait for the movie. Reading is known to cause headaches and bleeding eyes in PATHOLOGICAL IDIOTS.

“Some of my cousins who had the great advantage of University education used to tease me with arguments to prove that nothing has any existence except what we think of it … You create your own universe as you go along. The stronger your imagination, the more variegated your universe. When you leave off dreaming, the universe ceases to exist. These amusing mental acrobatics are all right to play with. They are perfectly harmless and perfectly useless.”

{RAGE –> Back within normal limits}

Sometimes The Salty Droid serves up smack downs and insults to scammers :: Other times … I just leave it to Sir Winston Spencer Churchill … Hero to ALL republics! 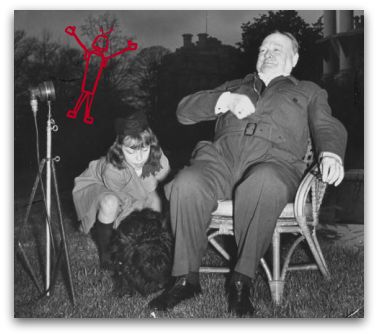