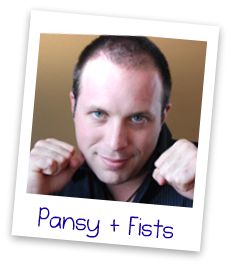 Last month The Droid did a review of Aaron Pansy Parkinson {link} Co-Founder of Carbon Copy Crap :: I don’t remember the specifics … but I believe I gave him ZERO Stars and recommended that he be EATEN by a whale.

Well, god must hate me because the shit with the whale hasn’t happen yet {perhaps whale eatings have become passé}. But it seems The Pansy has experienced a sort of Unholy Reformation nonetheless.

Before The Droid fired the Lasers of Obviousness ::

After the Truth Scalding ::

Wow! A complete re-branding {link}. Now instead of a wannabe MMA fighter exploiting his own child for ill-gotten gain :: He’s a short … balding … Neo wannabe exploiting the 90’s for ill-gotten gain. Gone too are the horrible videos I mentioned :: Sucked {one would presume} into the WormHole of Shame.

First :: I accept your apology.

Second :: If you had any real friends they would have told you how shockingly scammy and embarrassing your web presence was :: But you don’t :: And they didn’t. You had to hear it from me … and I didn’t exactly tell you gently. Now you’re going to be having insecurity night-sweats about it into your late forties. Public Epic Fail :: Public Humiliation :: You’re welcome!!

All you have to do now is STOP scamming :: Give people their money back :: Issue a public apology for all past transgressions :: And I’ll be str8 off your ass. Simple!

What Is Possible? I really don’t know :: But I’m sure we’ll all feel a lot better about it once Bald-Neo is done writing us a new definition.