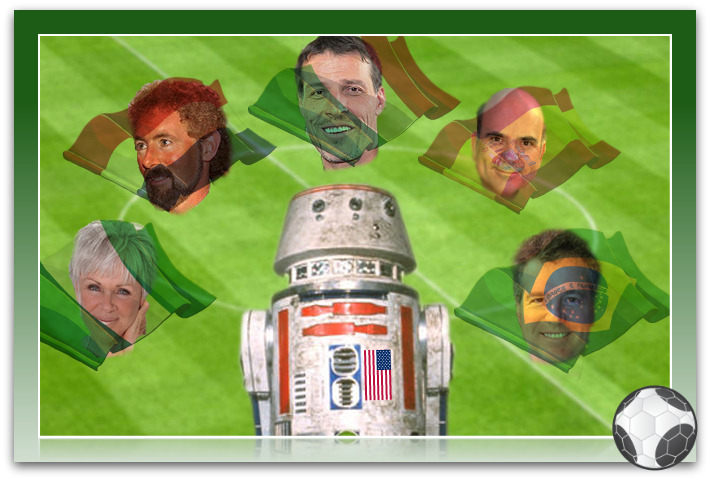 This epic poem :: ingeniously disguised as an idiotic blog … is about modern ConMen. About how they are using the power and beauty of mankind’s greatest invention to dramatically expand the reach of their destruction. The media is part of the problem :: and government enforcement is all but nonexistent. Vulnerable victims are having their lives ruined :: and people are dying. It’s a very serious and somber situation.

On the other hand :: I seriously love soccer! First World Cup in Africa :: all the games in HD :: America in a winnable group :: Italy’s team is total rubbish :: everything is looking sweet. Horah!!

Think I’m not robot enough to blend such disperate interests into a flavorful entertainment taco? Well you’re WRONG :: per the usual.

Introducing the SaltyDroid World Cup. Each team is assigned a useless parasite. The winning team gets glory and the World Cup :: the corresponding parasite gets a nice long stay at the top of my fucking list {I hear it’s lovely}. The runner-up gets a set of steak knives {snidely drops knives to floor}.

Here are the teams :: in order of their chances to win …

Spain – Joe Vitale :: winner of the long running “Who’s Next” poll … deserver of jail time and face slaps. Spain is so good that Mikel Arteta has never even made an appearance! Joe has a lot to think about :: I hope he doesn’t wet himself.

Argentina – Eben Pagan :: Debbie needs to learn new skills quick :: because her conning days are coming to a close.

Holland – Tony Quinn :: Is he man or muppet?

Germany – Tony Robbins :: Me vs. You big guy. I have no fear … and you have no standards or value.

France – John Reese :: a loser already on his way out. Still :: he could use a head butt.

Portugal – Jack Canfield :: whose lukewarm soups are laced with poison.

Ivory Coast – Elephants :: they’re so cute! Living as families … mourning their dead … having trunks. Plus how adorable are the babies? Too adorable! They must be stopped.

Serbia – Abraham-Hicks :: maybe they aren’t guilty of ethnic cleansing … but they are surely guilty.

Mexico – Wealth Masters International :: the wealth is fake … but the price is very real.

Chile – Kevin Trudeau :: lives in my city so we could meet for tea and cake.

USA – The U.S. House of Representatives :: root cause of most problems. Hypocrites :: egoists :: and power hungry fuck balls. I’ll take my team winning as a sign that God will protect me in this battle.

South Africa – SANG :: I know what you did last summer.

Ghana – Marci Shimoff :: you can’t hide behind that make-up. But no Michael Essien … so I wouldn’t worry about it.

Nigeria – Byron Katie :: the wicked witch of the East and the West.

Greece – Goldman Sachs :: mother fuckers and their mother fucking bullshit. To think about it … is to have your head explode. Tar + Feathers = Justice

South Korea – John Chow :: Proving that not all Asians are smart {or cute like little lady bugs}.

Switzerland – Mike Dillard :: his come-upins are long overdue … but he’s just so boring.

Slovakia – Oprah :: too rich to have standards.

Japan – Nitro Marketing :: droppin’ an A-bomb on the Nitro.

North Korea – Glen Beck :: may his testicles get caught in a zipper.

New Zealand – Red China :: fortunately it’s only a 2000 to 1 shot because my master plan for bringing down China’s oppressive regime is not yet fully formulated.