As the World Cups 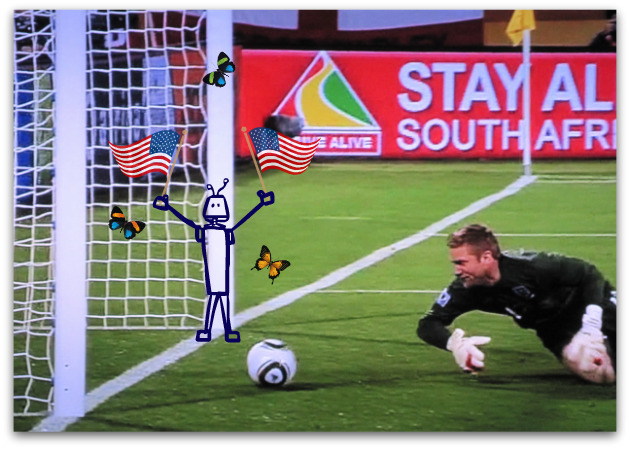 The first weekend of the first African World Cup is over and one thing is clear :: America didn’t lose!!

{spins and dances in circle}

I’m sure you’ve already heard what happened :: but I’ll tell you again just for fun. A ninety year old grandmother ran on to the field {all hopped up on snorted Adderall} and took a shot for the United States during their epic game against England. The shot moved with such stunning slowness and lack of power that England’s goalkeeper Robert Green could do nothing but offer the ball tea and conversation as it dribbled past him and into the net. Grandma Saggums was then given a yellow card for slowly tearing off her shirt {exposing her homemade cellophane sports bra} and telling Green to :: “suck it as hard as you can pretty boy.”

My goodness Grandma Saggums :: that really is quite rude and unsportsmanlike. For shame!!

Speaking of shame :: and disgrace :: and humiliation … here’s the final parasite list for The Salty Droid World Cup. Couple of final changes …

Of course :: no matter how much manifesting we do :: not everyone can be a winner. Please remember that it’s a huge dishonor just to be nominated.

USA — The U.S. House of Representatives