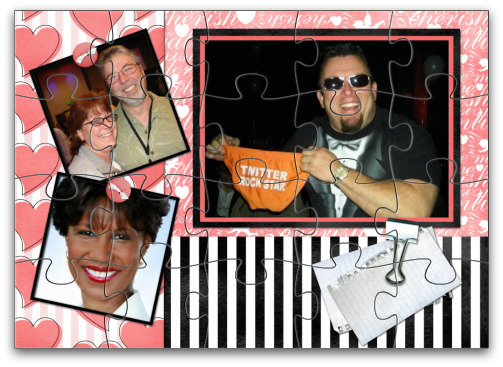 Sometimes Twitter conversations between the “Brick Stupid” and the “Rock Stupid” can be hard to follow. Let me act as your Stupidity Translator Droid and guide you through one such Twitter Tangle™.

Three days ago Tanya Chadwick sent this Tweet to my BFF Evil Jowls ::

TanyaChadwick: @PerryBelcher you are the bomb Mr. Perry Belcher,who is this guy that keeps sending me sh.t about not following you?he needs to get a life!

Tanya is not a fan of The Droid :: It’s a little strange because her Twitter Bio says she’s a fan of ALL people who are “keeping it real” ::

“Being all things to all people Always with love, sincerity and integrity! Fan of all that r keeping it real”

I guess The Droid doesn’t qualify under the “being all things to all people” category of keeping it real. In fairness to me :: I was unaware that it was a category until just now.

MaryWilhite: RT @TanyaChadwick: @PerryBelcher you are the bomb Mr. Perry Belcher,who is this guy that keeps sending me sh.t about not following you?

She cuts :: “he needs to get a life!” :: presumably for character constraint reasons … but the meaning is completely changed ::

Mary doesn’t mind if meanings get mangled on 3 day old tweets … because she is just ReTweeting things incessantly … and seemingly at random. ReTweeting Tanya’s turd comes during a torrent of Perry Belcher related ReTweets by Mary the ReTweetist :: Here are 3 of the 33 consecutive tweets ::

Mary the ReTweetist: RT @styleosophy: thanks for the follow Perry Belcher!

Perry Belcher {Twitter Guru & Marketing Legend} has been all but silent on Twitter for the last two days. Still, he decides that he must answer the question that Mary the ReTweetist was **not **actually asking.

Of course, Mary doesn’t reply to Perry’s strange answer to the question that Tanya wasn’t asking :: She’s too busy ReTweeting other worthless things she hasn’t read :: But SIX members of The Chorus of Unobservant do ReTweet Perry’s Uncomfortable Untruth without any regard for it’s {odd} context :: {1} {2} {3} {4} {5} {6}