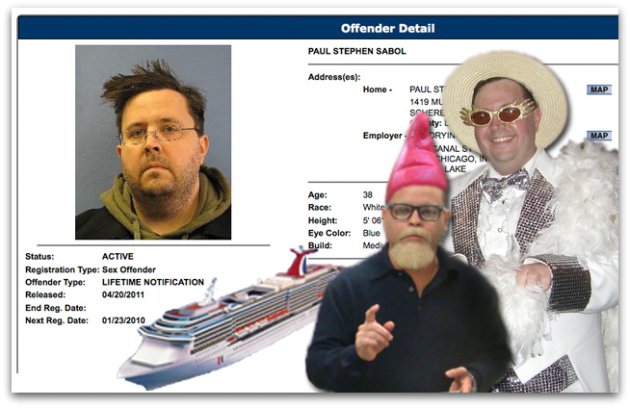 Each year the tiny town of GnomeVille has a pissing contest :: literally. The winner of the contest gets to spend several decades selling used cars in what the GardenGnomes call :: “the big people world!” :: One such lil’ pissin’ champion was turdy little troll {because even gnomes can be trolls} Mike Filsaime. After pissin’ big :: Mike did something none of the other gnomes had ever done :: he quit selling used cars. The Vicious Garden Gnome thought he could make more money by selling nothing :: for the price of a used car :: so he crowned himself a “guru” and has been giving trouble to “the big people” ever since.

This week Garden Mike and some of the top names in calling yourself a top name are going on a hot and sweaty vacation together. It’s time for the annual Internet Marketers Cruise :: Come and have your vacation ruined by the same slime ball mother fuckers that are ruining the rest of your life :: and as an added bonus if you act early and often :: you may receive one of three available STD’s.

Planning the cruise just wasn’t as fun for Mike this year without the help of previous co-organizer :: and flamboyant fat dude :: Paulie Sabol. Paulie was a great help {in the con man sort of way} :: of course there was the whole thing about him being a convicted child molester :: and a lifetime registered sex offender :: but whatevs! Nothing was ever proven! {except for the parts about him being a child molester :: those parts were proven}. No reason to waste an “action oriented” salesman over something as trivial as pedophilia.

But alas :: Ben Mack ruined it for everyone :: that uptight bastard. Ben didn’t care enough about everyone else’s success to put up with Paulie :: confessing his love of children :: sexually harassing him :: and then ripping him off {sordid tale}. Ben exposed him :: and a perfectly fine ConMan was forced to resign a brief FOUR MONTHS {oy vey!!} later {link} …

“After nearly 10 years of bringing you the best in education “By Special Arrangements, Inc.” through events offline and online, through products and services designed to increase your wealth, and coaching; I’m changing my focus from your fortune to my family.”

What a lovely sentiment.

So in early 2009 when some Internet Marketer {wrong!} went “rogue” and started Salty Droiding all over everything :: Ben was blamed … early and often {and still … a lil’ bit}. He had already shown his disloyalty by outing a pedophile :: so he was obviously capable of any kind of imaginable treachery. And as Harlan Kilstein was fond of telling people :: {nasal} “Sheesh! Even a fool or a child could tell that The Salty Droid’s writing style is EXACTLY the same as Ben Mack’s.” OH — MY — GOD you people are stupid!

The whole thing was a massive disaster and disgrace for Vicious GardenGnome :: and former used car salesman :: Mike Filsaime. He’s organizing family vacation / pressure sales seminars with a convicted child molester. He’s had to spend the last year and a half distancing himself from that toxic situation … or at least that would be the case if this wasn’t fucking insane-o-town. Because here in insane-o-town :: Mike has NO SHAME about it his monstrous and reckless incompetence.

1) The head “mastermind” of the event is Donna Fox :: Sabol’s old partner. Donna will be leading the “mastermind” sessions each morning. Here’s a Ripoff Report about Donna and Paulie’s Real Estate membership site :: which promised a “lifetime” membership for $2500 :: as long as you promised to die in 2008.

While you IM’ers are cruising and masterminding with Donna Fox :: why not ask her about setting up scam companies with pedophiles :: and then walking away from customers when you get exposed? Does she recommend that as a way to build a 8, 9, or even 10 figure online business?

“YES, the whole family is invited. Families are a major market for Carnival with a minimum passenger age of 4 months. The kids will be kept busy and entertained with the ship’s fully staffed “Camp Carnival”. Their team of incredible counselors offer free supervised play for the kids from 9 AM till 10 PM and paid babysitting till 3 AM if needed …

Don’t think there are just activities for the younger kids though. There are plenty of things to do for pre-teens and teens alike including a separate teen disco, arcade and a large swimming pool.”

3) And best/worst of all :: Mike Filsaime :: guru of marketing strategy :: is using the evidence of his past idiocy in his promotional materials. Because nothing says “family fun” like pedophiles. Notice Paulie’s picture in the collage of photos near the bottom :: and start the last video … it opens with Pedophile Paulie dressed as Elton John {with the feather boa … but without any of the cool}. Paulie sings … I shit you not …

“I remember when rock was young

Me and Susie had so much fun”

Filsaime has either lost his tiny gnome mind :: or he never had one to start with :: because that’s some epic stupid right there. Mike is huge fan of hating The Salty Droid :: so he’ll see this post while his ship is drifting out to sea {literally and metaphorically}. I sure hope it doesn’t spoil his mood and impair his ability to grind money out of the n00bs. Hey Mike :: if you are feeling down … The Droid recommends snorting Adderall off of toilet seats :: I hear that does wonders for ones ability to “think fast” … or “think at all” in your case.