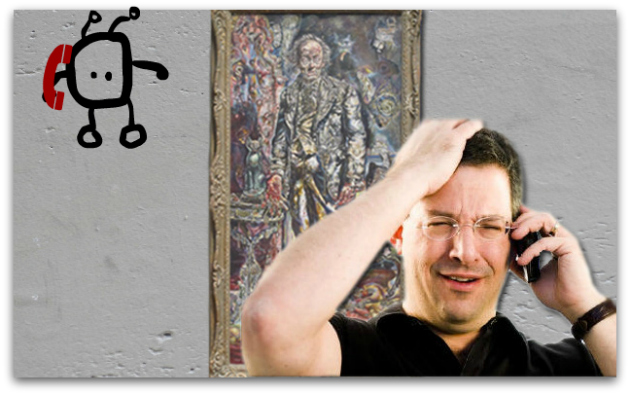 Two lawyers walk into a bar ::

Lawyer 2: Thanks for the beer, see you around {sound of saloon door swinging on its hinges}.

Lawyers :: you see :: have an aversion to fake robots … and risks … and technologies more complicated than blackberries {the fruit} … and things that can’t be classified into check-box forms and filed alphabetically.

So when lawyers do call in on the fake robot hotline :: they’re wanting favors not troubles :: and they usually start off just like all y’all start off …

You’re the best. I’d really love to talk with you about something if you’ll promise never to say we talked. Because … well you know … you’re like … well … a freak and everything … and I myself need to avoid risks … like a sissy among the sheeps … I’m sure you understand.

Kevin E. Houchin :: non-magazine-Esq. :: wanted to talk to Jason about the soundness of writing a defamation threat letter in a 9/11-truther flame war situation. “Gosh that’s a wicked stupid idea” :: Jason was happy to say for the not first time. How can law consider itself a “profession” if it’s going to give legal letterhead access to ANY fuck with a dime and a gripe? Your fucking oath to uphold the Constitution doesn’t apply to the spirit of the First Amendment? Where’s the emphasis of your supposed ethics then … bicameralism? Boom! Fake questions that could only be answered by real professionals :: of whom I see precious few.

Anywayz … at the end of the convo Kevin mentions he might write an article on the subject for Lawyerist.com.

But it did contain this strange caveat …

“Jason and I don’t agree on everything, but I definitely respect his knowledge and experience in this area.”

That might sound normal if you’ve been long sucked into the darkness :: but it’s a strange sentiment for an outsider to express. Of course we don’t agree on everything :: it goes without saying … so it rarely gets said. But it gets said in DipShit DoubleSpeak all the time :: and it means …

“I agree with The Droid to the extent he has pointed to specific bad acts {like murders} which are embarrassingly hard to deny or justify. However :: to the extent that his whole point is that Internet unicorns don’t exist :: and that it’s wrong to hard-sell people unicorns that don’t exist … that I must refuse to accept for the sake of my own wallet … amen.”

I should have known … I did know … basically.

I published a linkback to The Lawyerist article in my Ode to Ai Weiwei :: and within a few hours I find out that Kevin Houchin is Joel Comm’s lawyer.

And it’s not just a legal services relationship either :: they’ve got a full-on association …

I’m like :: “Yo Kevin! Maybe you forgot to mention a little something something to me?” And he’s all like :: “Didn’t seem relevant … we were talking about something else … and Joel is one of the good ones.”

Oh I’m sorry … I didn’t know Joel was one of the good ones. That’s cool :: I guess I should sign up for his “The Secret Classroom” then … the sales page for which begins like this …

“Re: You Becoming a Millionaire and Achieving Your Dreams… For Real!”

Not really for real :: pretend for real … but I guess it must be pretend in the “good guy” kind of way.

Maybe you’ve noticed that a lot of “guru’s” like to TALK about how much money they’re making. They throw around all kinds of facts, figures, and screen shots of their bank accounts. But where the rubber meets the road, either:

A) They didn’t really make that much money.

or the more likely case…

B) They won’t reveal how they really got that money into those bank accounts that they’re bragging about.

That’s where the Secret Classroom is different. Sure, our teachers will tell you how much money they’re really making (millions), BUT MORE IMPORTANTLY they’ll show you exactly WHAT they’re doing to make that money.

and Miami Vice threw-up all over me Mike Koenigs …

The Secret Classroom is available now for just $47 :: but if you had acted NOW {back then} you could have paid much much more for it! Thank you Secret Scammer!!

And it’s not just “teachers” that love them some Joel Comm :: it’s students too :: like this fatty mcfatty donut eater …

Thank you Harlan Kilstein :: I’m sure that was a totally true story that had nothing to do with you trying to shill and asslick your way to the top {of the bottom}.

Where is the Integrity in Internet Marketing?

… asks “good guy” Joel Comm this past January during a period when many gurus were experiencing a sudden blight of fake-conscience.

There’s nothing wrong with making money. But sacrificing your integrity to do so is uncool. I have discovered from firsthand experience that there are many Internet marketers without integrity.

The first hand experience came long before the blog post :: but Joel “the teacher” didn’t feel compelled to mention anything about it until long after the invention of fake robotics.

Now I need to be honest. A few years ago, I promoted some products and services that I later discovered were sub-par. At that time, I didn’t realize just how susceptible people were to the sales letters, countdown clocks and upsells. If I could take back promotion of those products, I would.

But if he could take down his own shitty promotions :: or his own open promotions of other inner-circle na’er-do-wells :: then he obviously wouldn’t … because he obviously hasn’t.

I’m not saying that I haven’t made mistakes. I have. In fact, in 2008 the continuity attached to the launch of AdSense Secrets 4.0 caused a stir. When it was pointed out to me, I issued an apology and immediately made changes.

We also had a $1 trial offer debacle in 2008 which caused our call center to overflow. Don’t get me started on what I learned from that!

But the point is to learn, make adjustments, and hopefully do better in the future.

But that is NOT the fucking point. When you’re charging people for your supposed expertise on a subject :: you don’t get to bumble around like an idiot in that same area. Forced continuity and $1 trial offers are amateurish at best :: and completely criminal at worst. If that’s the kind of shit Joel Comm is pulling in his own faux-business :: then how is he worth paying to help you with yours?

Joel Comm will tell you that :: while his front-end sales are “cheap” :: his personal “mentorship” is “valued” at a hell of a lot more. You know :: because Joel has so much to give :: and teach. The circle of parasite life!

What the gurus didn’t :: and won’t ever :: tell you is that this whole thing is a game of relationship/reputation manipulation. As I recently explained to Ruler of the Internet Matt Mullenweg {while requesting that my comment on his Tim Ferris blurb get printed} …

It’s an overt plan to ruin people … and it’s going on all around you. One of the things in their playbook … high up in their playbook … is “trust borrowing”. That’s you. They show the pretty side to respectable authorities … just enough get some arm’s length association. Then out of the view of that trusted authority the relationship and association are exploited to the great detriment of society.

Victims of large scale relationship fraud are left mentally damaged/broken :: like the victims of rape circa 1950. Not only has their trust in humanity been viciously violated :: but they are blamed for the crimes perpetrated against them :: and they’re left to wallow in misery and self-loathing so that the rest of society can pretend it’s not happening.

The Salty Droid represents an unambiguous line in the sand. Cross that line :: oh ye weary sheeple :: and find out that it’s THEM :: not you :: who should be hated. And that you’re nothing like alone.

But if you’re on the other side of that line :: on the THEM side … then you’re not going to say my name {ever!} without response. T-shirts that say RAPIST on the front don’t get to say “>> bleep bloop” on the back.

So welcome to my Internet Reality Show Joel Comm … where the “winner” gets driven from this fucking town.

Make sure to thank your lawyer.