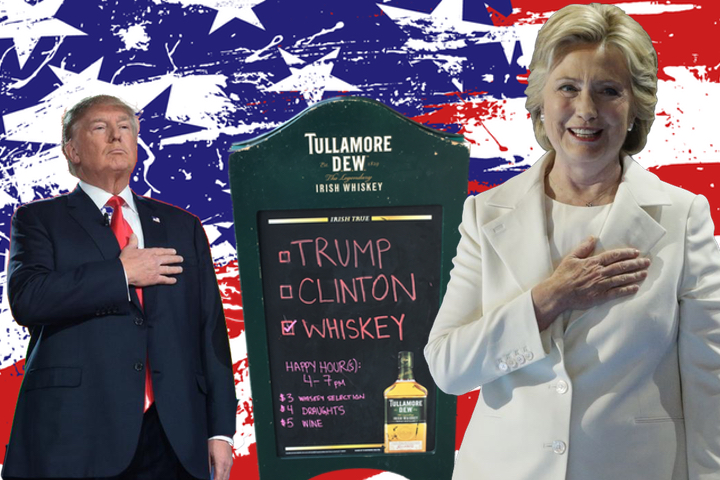 Don’t vote for whiskey today … at least not until after you’ve voted for Hillary Rodham.

This election season has really blown goats. We’ve been forced to choose between the lesser of two evils :: either …

The final repudiation of our noble attempt at self-sustaining :: constitutional … representative democracy.

We had a good run :: contributed bigly to Enlightenment ideas … but ultimately our experiment produced the typical result … a fucking lunatic {with memorable hair} hellbent on burning it all down.

Hooray :: we did it … we accomplished the bare minimum.

But Donald J. Trump :: a know-nothing conman misogynist racist … still got more than fucking zero percent of the vote for President of the United States of America.

How is that possible? How is it possible that one of our two major parties put forth a candidate who was so demonstrably unqualified … and whose only appeal was unsheathed hate rage?

There are no take-backs :: this thing totally happened … some of us just voted for a race baiting women hating lunatic. Instead of killing baby-Hitler :: we raised him up on the plastic pedestal of tabloids and reality television … then did nothing to stop his ascent to demagogue in chief.

That you didn’t vote for him … doesn’t make you any less culpable for his existence.

Something is broke … and Trump losing don’t fix it.

Oh and her … maybe she wins?

It’s kind of awesome and amazing and fun :: and I want to be so happy for us. Black guy :: black guy … lady? Boom! Suck on that France … that’s some cosmopolitan shit right there.

But we can’t be happy.

We couldn’t talk about her progressive policies :: or criticize her {below average – but still high – level of} corruption … because the only thing that matters is Donald Trump losing.

Please universe :: for the love of all that is good {with a shout-out to all that is marginal} … anything but Donald Trump.

Hillary Clinton is not the lesser of two evils.

He’s the antichrist … she organizes her ideas into binders.

Forget about the same election … they don’t belong in the same fucking sentence.

We don’t get to vote for the first lady president :: we have to vote for her … to stave off the apocalypse.

If you think you want to vote for Gary Johnson because the two party system is garbage :: then I agree … but vote for Hillary Clinton.

If you think it’s not worth voting because all politicians are equivalently useless scumbags :: then I agree … but vote for Hillary Clinton.

If you think Hillary Clinton created ISIS and is insufficiently hawkish on foreign policy {like the above flier sent to me by the Republican National Committee} :: then I disagree and you are profoundly ignorant … but you should still vote for Hillary Clinton.

None of Ms. Clinton’s faults :: real or contrived … are even worthy of mention in the shadow of Donald J. Trump’s towering horror.

Donald J. Trump is the worst candidate in our two century history … and that by some margin. This is the easiest decision we’ve ever had to make America.

Let’s not fuck it up.