“And I’m confident that I’ll be right back. I love Twitter :: And it’s fucking FREE. Spam is a complicated problem :: And so is rapid growth :: They’ll get it figured out.”

Well I was obviously wrong :: And I apologize to you. Accuracy is important to me :: So I’d like to issue this correction. I, in fact, do not love Twitter. They blow! I’m banned for good. Any new account I set up gets banned. Someone else {shout out!} was trying to get my message out to the tweepeople :: And they got banned. “And all the scammers?” you wisely ask :: Yep! 100% of the crooks still tweeting away about their transparent little schemes {mostly involving ways to destroy Twitter :: ironically enough}.

A few days later I said some kind words about YouTube’s copyright system even though 6-ish of my videos have come down :: {link}

Correction :: It seems my declaration of blamelessness has been a tad premature in re YouTube as well. And again :: I apologize to you. YouTube is less than blameless :: And in fact :: May well also blow. My entire account –> GONE! Poof! Vaporized … {sad robot}.

So who filed the claim that broke YouTube/Google’s back?

This is to notify you that we have removed or disabled access to the following material as a result of a third-party notification by Wealth By Choice Pty Ltd claiming that this material is infringing:

David Schirmer :: WTF Guy? I was getting bored of you. What R U Crazy? :: Desperate for attention? Buy a fucking parrot! :: I haven’t written any posts about you since MAY :: I can think of a couple flopping fish who would love to be in your shoes {except for the whole having to live in Australia bit}.

And now I present this {more than convincing} evidence from Perry Belcher’s still existing YouTube account :: That he is indeed in possession of a highly offensive pair of ManBoobs :: 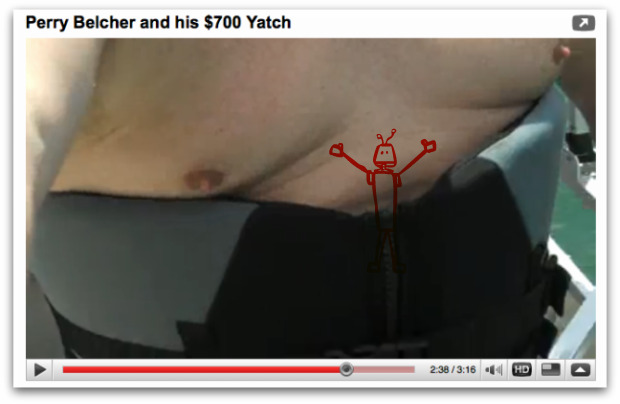 I’ve just got to stop being so nice.