Hating for Fun and Profit

FatFacePigFuck Perry Evil Jowls Belcher has accused The Droid {not to his face} of hating as a way to seek attention {link}. Super D-Bag Gary McCaffrey did the same during the TweeterGetter fiasco {link}. It’s an accusation leveled against The Droid with herpes-outbreak regularity.

It DOESN’T impress :: I’m obviously doing something more complicated, so it strikes me as quaint and clueless. Good luck figuring me out shit eaters!! 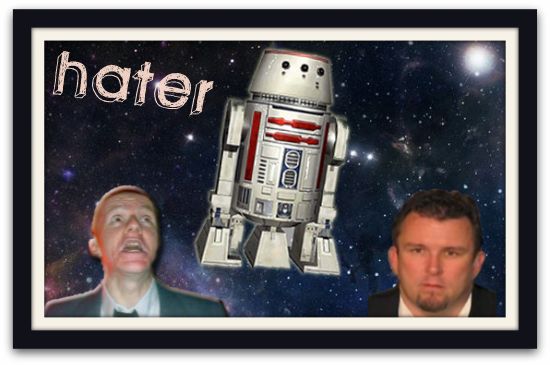 However, these foolish pricks do make a good point. Hating is a Gr8 way to move up the internet marketing career ladder. Most people at the top of the business have left a trail of suffering and tears. Even tiny seeds of dissent can lead to a career ending Full Mutiny. That’s why each Guru makes it his duty to begin the Hater Counter-Attack before the hating begins. “Haters are traitors who will never succeed … and probably don’t even want to!!”

Hating a “popular” person WILL get you more attention than kissing their ass. You can kiss ass for 6 months and never get a scrap of help selling your crap {even when your ass kissing includes handing over Thousands}. But start a righteous hate fest {by making a good case} against some Guru, and the hits will start to flow :: People will often mistake your hate for wisdom :: And you’ll probably make some sales. Isn’t that what you are trying to do??

The Network is fractured and tribal. The fingers hate the toes. Fellow marketers WILL NOT align against you for taking a stand against a scum bag that has gone too far. You’ll earn lots of permanent allegiance :: But very little permanent scorn.

Perry Belcher is a great chance for you to learn Hating for Profit!! He’s the Bunnie Slope of Hate :: The Noob Bait. He has all of the best qualities ::

Just try it ONCE before you buy your next e-book on generating traffic. Call out Evil Jowls for being a liar and a fake on your blog. Ask a few of your marketing friends to read your story and link to it. Let him {and everyone else} on Twitter know that you’ve called him out. Now ignore the backlash, and try to convert your leads.

Six months from now The Droid will finish his assault, and Perry Belcher will be rotting in prison {hopefully in Bogota, Colombia} :: Then you can whip out your old post and claim that you saw it all coming. You are the wise industry veteran that saw what others refused to see :: And you are available for speaking engagements.

Think of the success you might have! Maybe this could be your Big Break. Why Wait? Only the first 10 people to take a stand get to claim Prophetic Powers. Not capitalizing on this golden opportunity is like setting fire to a winning lottery ticket!