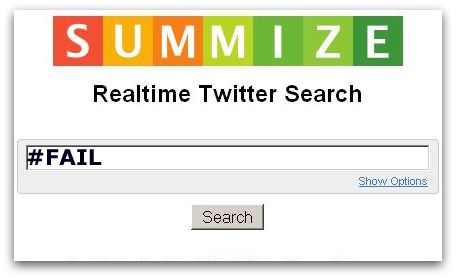 A couple of weeks ago, The Droid accused Perry Evil Jowls Belcher of lying about Spam swarming MC Hammer with Tweets from his followers {here}. While his story is obviously riddled with lies, it wasn’t the outright fabrication that I first thought. For this error, I blame Twitter Search :: Whore of Web 2.0!!

I linked to several Twitter Searches in that post {all with proper syntax} which should have validated the _Evil Jowls/_MC Hammer story, but instead produced nothing. Why? Because Twitter Search currently extends back for ONLY 55 DAYS!! WHAT?? Yep, 55 pathetic fucking days.

I suppose Web technology hasn’t advanced far enough to store and index plain text. Of course, we’ve done it those 16 quadrillion other times :: EVERY fucking second of EVERY fucking day :: but I guess Twitter Search just doesn’t have the balls to search something as intensive as TEXT. So if you want to know what @ev was tweeting about in 2006 … you better ask Google {here} … because Twitter Search don’t know shit about it.

In the early AM of March 10th The Droid tweeted ::

“Hey @perrybelcher, I’ll see you 2Nite at AIMEN!! Anyone tweeting from Six Lounge is going to hear the truth about you. I love you. Gnight”

After this tweet, The Droid was silenced in Twitter Search for 48 hours. I could send tweets from my account, but they couldn’t {and still can’t} be seen in search {lost tweets}. Why? Two full days are missing from the search results without explanation! How often does this happen, and to whom? What kind of shitty ass search engine looks for data to exclude?

Twitter Search should put a disclaimer at the top of their page:

I’ve heard people suggest that Twitter might be a challenge to Google in search. Why don’t we wait and fucking see if Twitter can learn how to search Twitter before we go giving it the whole Web {which is rumored to contain more than TEXT}!